2015 Lexus RC: The Pursuit of Performance

This new coupe is another signal that Lexus has dramatically changed in how its vehicles look, perform, and handle.
#Brembo #Toyota #HP 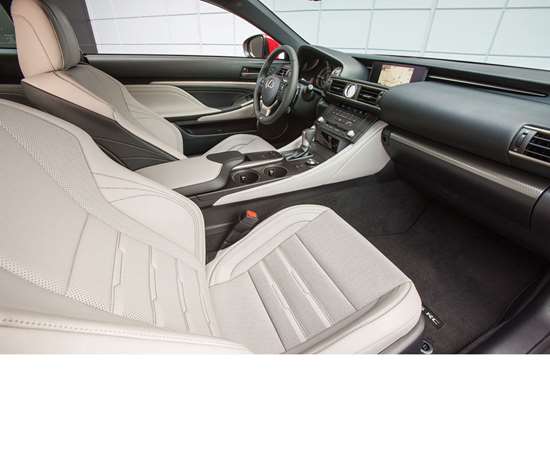 The interior is heavily based on that of the IS sedan, and upper level models ditch the mouse-like controller with a track pad. Fit, finish and materials are exemplary. 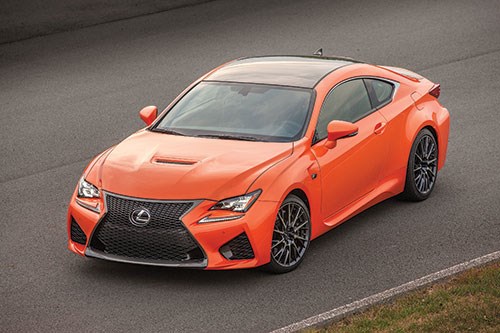 RC F is the halo model for the RC lineup, and replaces the IS F sedan. A heavily modified V8 powers the rear wheels through an eight-speed automatic, and options like a carbon fiber roof and torque vectoring differential are available. On the downside, it weighs nearly 4,000 lb. 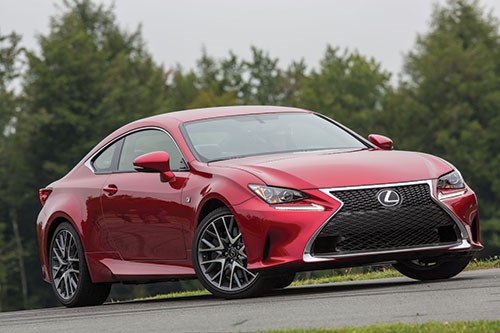 So many pieces went into the structure of the Lexus RC coupe from other Lexus models (IS, GS, IS C), that it almost seems to belong in a Frankenstein movie. What’s more, there were two chief engineers. The RC 350 was handled by chief engineer Eiichi Kusama, while the high-performance RC F was the product of Yukihiko Taguchi. All of this stems from the need for the RC to address being everything from a Grand Touring automobile to BMW M3 competitor.

Rather than shorten an IS sedan and drop a coupe body on top, Kusama and Taguchi looked at what was needed to reach the goals they had set. The engineers took the front end of the Lexus GS and the center section of the IS C convertible for a number of reasons. First, the GS had the width the Toyota engineers wanted for interior space and handling. Second, IS C center section had the under-body stiffening needed in a high-performance 2+2 coupe. Finally, the IS sedan’s multi-link independent rear suspension had the kinematics and structural stiffness to handle the ride needs of the RC 350, and the handling performance of the RC F.

Supplementing the spot welding in the build, the engineers also incorporated body adhesives and laser screw welding. The latter is used in place of laser seam welding which, Lexus claims, would have dimensionally compromised the steel structure by introducing too much heat into the panels. It is found primarily on the hem flange around the door openings, rear window opening, and at the front surfaces of the A-pillars. Further stiffness gains were found by increasing the front apron panel thickness, enlarging the inner sections of the rocker panels, and adding a center floor gusset. Supports sprouted along the underbody in the form of an under radiator support, a front under-floor A-brace, and a tunnel brace. Apparently this wasn’t enough because the RC 350 also features a trapezoidal brace between the driveline tunnel and the front mounts for the independent rear suspension. This ties the front and rear sections together through the center of the car, and creates a whole out of many parts.

The RC F receives yet more bracing; an engine compartment brace that stretches between the front struts and firewall, and a larger sheet-metal rear partition to prevent the increased cornering forces from distorting the rear structure. As you might expect from all this bracing, the RC is not the lightest vehicle out there. The base curb weight for the RC 350 is 3,750 lb, while the RC F is a stout 3,940 lb. To keep the center of gravity low, RC F buyers can order a carbon fiber roof panel and rear wing produced in-house with knowledge gleaned from the Toyoda Loom Works.

As expected, the RC uses a double-wishbone front and a multi-link independent rear suspension, and is fitted with four-wheel ventilated disc brakes. The RC 350 has 13.15-in. ventilated rotors with four piston calipers up front, and 12.2-in. ventilated rotors with single piston calipers in the rear. Moving up to the F Sport increases this to 14.06 in. two-piece rotors with four piston calipers and high-friction brake pads up front, while keeping the standard rear setup. The high-performance, V8-powered RC F, however, is fitted with 14.96-in. slotted Brembo front discs clamped by six-piston aluminum mono bloc calipers. In the rear, the 13.58-in. Brembo discs are fitted with four-piston mono bloc calipers.

To get the carbon fiber roof and rear wing for the RC F, you also have to order the torque vectoring differential (TVD) to replace the standard Torsen unit. It features an electric motor on either side of the differential that enhances the yaw moment in the direction of the turn. Coasting torque upon corner entry is transferred from the outer to inner wheel, then transferred to the outer wheel to generate yaw in the direction of the turn. This continues up to the traction limit through the corner exit. Not surprisingly, there are three driver selectable modes for the TVD: Normal, Slalom and Track, and their effect can be viewed via a graphic represen-tation of torque distribution in the instrument cluster.

The trick differential is not available on the RC 350 F Sport. It, however, can be ordered with all-wheel drive. Other intriguing F Sport features include Dynamic Rear Steering that adds up to two degrees of rear steer to make the car more nimble. It is part of a package that includes Variable Gear Ratio Steering and Adaptive Variable Suspension, each of which can be adjusted via the drive mode select button on the center console. The driver can choose from one of three settings, Eco-, Sport, and Sport+. Standard on every RC model, on the RC F it also controls the tuning of the electronic stability control, electric power steering boost and air conditioning, and—like the lesser models—also controls powertrain response.

Toyota engineers began with the V8 from the outgoing IS F sedan and thoroughly redesigned it. The new cylinder head supports a higher compression ratio, and improved intake and exhaust port breathing. Further, the intake cam profile has been changed, the diameter of the throttle body increased from 76 to 83 mm, and both the intake and exhaust valves are made from titanium. Also, the connecting rods are made from high-strength forged rods with reduced big end bores, which helps performance. Toyota engineers, however, also worried about the performance model’s fuel economy. Thus, the V8 operates using a Prius-like Atkinson cycle under light loads with a late closing of the intake valves. At its maximum, this effectively removes 800 cc of displacement, and gives the V8 fuel economy equivalent to a 4.2-liter engine. Yet the dual overhead cam V8 produces 467 hp at 7,100 rpm and 389 lb.-ft. of torque from 4,800-5,600 rpm. Though all rear-drive Lexus RCs are fitted with an eight-speed automatic transmission, the RCF uses the same Sport Direct Shift (SDS) gearbox found in the IS F sedan. It is beefier in order to handle the power available, and performs a full lock up from second to eighth gear when in manual mode.

The highly bolstered front seats are unique to the RC F. Like the less-aggressive versions in the other two models, these sport seats use foam-in-place construc-tion to fill every nook and cranny with high-density foam for maximum support.