When the first-generation Chevrolet Volt appeared in 2010, it was almost more of a cause than it was a car.

The genesis of this goes back to the mid-00s. As Bob Lutz, who was heading up General Motors product development at the time writes in his Car Guys vs. Bean Counters about a position he took during an Automotive Strategy Board meeting, “I once again advocated that we create the world’s first electric car. . . . Only that way, I argued, could we blunt the relentless reputational rise of Toyota, coupled, of course, with the ‘gang that couldn’t shoot straight’ yoke around our neck.”

Toyota had the Prius and GM still had the Hummer H2 at the time.

They worked diligently and showed the Volt concept at the 2007 North American International Auto Show in Detroit. Then the model year 2011 Volt arrived just a few short years later. One of the problems in the early days—something that continued to be a cause for GM—was describing the Volt. They insisted that it wasn’t a hybrid. Presumably that had more than a little something to do with the fact that with Prius, Toyota essentially owns share of mind for the hybrid term.

It was an electric vehicle, they maintained. But then, people noted, there was the not-trivial matter of a 1.4-liter, 84-hp internal combustion engine under its hood. “That’s not an engine!” came the response. “That’s a generator used to charge the lithium-ion batteries, not to turn the wheels of the vehicle.”

This gave rise to the term “extended-range electric vehicle.”

Which then gave rise to those who discovered that under certain conditions the engine was used as an engine. . .

And it became all too complicated for regular people to sort out.

Arguably, one consequence of all this was that the Volt wasn’t perceived as a car straight-up. It was something undefinable, or if defined, incapable of being understood.

It could have simply been presented as a car that you can plug in to an outlet in your garage and that’s capable of using no gasoline if you went a short distance (under ~35 miles) and little gas compared to other compact cars (up to 379 miles).

Instead, all of the extended-range/generator-not-engine folderol.

Now the second-generation Volt has been released. Here’s what you need to know: It is a sporty compact car that can go really, really far if you have its battery charged and a full tank of unleaded: about 420 miles. If you have a fully charged battery, you can go about 53 miles on electricity alone.

It is not a science experiment. There is high technology galore under the hood and under floor and all the way back to the trunk. But you need not concern yourself with any of that. When you are driving with that 18.4-kWh lithium-ion battery pack charged, it is really a peppy car. When it runs out of juice, then it’s not so peppy, but you’ll still get about 42 mpg.

Know well that if you’re interested in fuel efficiency without sacrifice of amenities (the vehicle driven here has a leather-wrapped, heated steering wheel, for example), then consider the Volt. If you want performance, then your local Chevy dealer certainly has a Camaro or Corvette that can fit the bill.

But the electric drivetrain is so good in the Volt that it is in some ways an Achilles heel. That is, when I was driving the car and the battery was depleted, there was a discernable change in the performance of the car. It became just an ordinary compact sedan. And as the transmission functions are served by the Voltec electric drive system rather than by, say, a step-gear transmission (which admittedly would not be appropriate for a vehicle of this powertrain setup), under acceleration it sometimes seemed as though it was working too hard (and this is “normal acceleration,” not “let’s see how fast I can make this go” acceleration).

According to members of the Volt team that I’ve talked to, Volt customers for the most part perform opportunistic charging whenever possible. So they’ve designed the 120-v cord set to be easier to handle. Think of this in the context of being in an airport and seeing people with their mobile phones plugged in. You get the juice when and where you can. 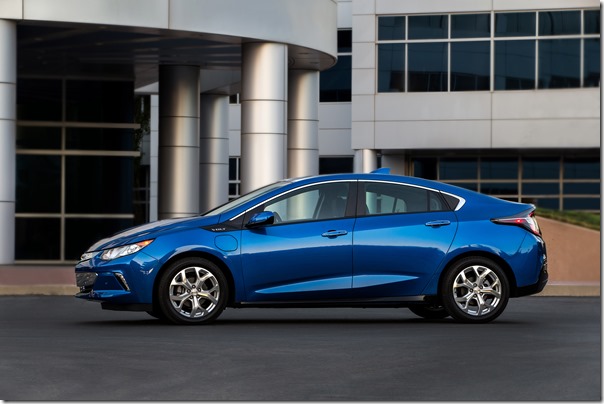 That said, the amount of time necessary to fully charge a Volt with a household socket is on the order of 13 hours. Should you have access to a Level II charger, which you can sometimes find in parking lots (I was surprised to discover how few there are; in Ann Arbor, for example, the Downtown Development Agency has installed 23 located in six parking lots, so given that that city is one of the places where you’re likely to find more plugs with cars than, say, Farmington or Livonia, you’re likely to find those chargers in use), the time to charge is 4.5 hours.

Another reason why there is a bit of a hobble to the Voltec electric drive system is that when you’re driving on the battery without the 1.5-liter range extender in use, the electric variant of miles per gallon (MPGe) is great: 106. But then when the range extender is in full play, that number does nothing but go down, so even if you bottom out, say, at 46 mpg, you think about where you were and what you’ve arrived at. (OK, there’s no getting around this, but I still found it somewhat disconcerting.) But to get back to the original point: If you’re looking for a compact that does, indeed, get really, really good gas mileage, a car that happens to have a port in the front fender where you can plug it in, then you really ought to take a look at the 2016 Volt. Sure, you’re going to pay more for it than a conventional compact, but in terms of the way the car is designed and equipped, the premium for the premium powertrain is supplemented by some good gear, so it’s not just the batteries and the motors that you’re getting for your money.

Yes, a CAR to consider.