Although this is a subcompact crossover utility, Honda designers and engineers packed a whole lot into the HR-V.
#Mazda #Honda #Fiat 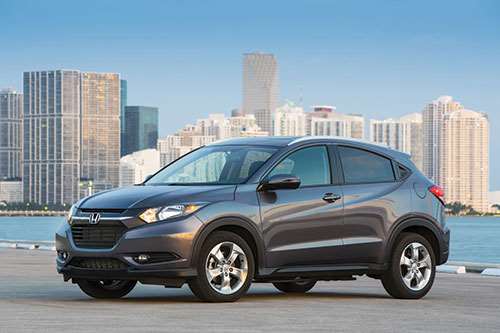 Naohisa Morishita, chief engineer and development leader for the subcompact crossover HR-V, says that when they were developing the vehicle they worked to achieve characteristics that are otherwise opposite: fun yet sophisticated, youthful yet mature. They worked to achieve the personal nature of a coupe with the utility of a minivan and the sense of toughness and safety characteristic of an SUV. 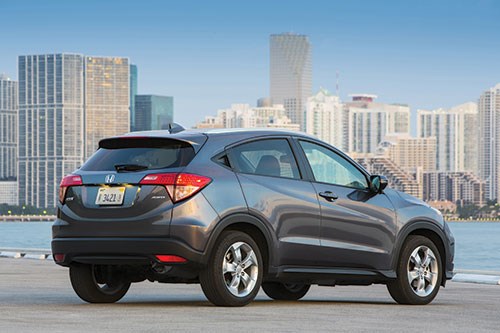 The HR-V is based on Honda’s Global Compact Series platform. It is being manufactured at the Honda plant in Celaya, Mexico, where the Fit is also built. 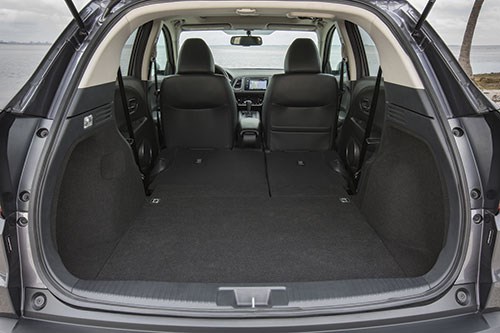 “We think this segment is going to explode.”

Although people generally, no doubt, think about “Honda” in the context of either the Accord or Civic, the company’s light truck offerings are non-trivial in the company’s overall portfolio, with the CR-V, Pilot, Odyssey, and Ridgeline accounting for 591,805 units of sales last year, or 42% of Honda’s total U.S. sales. According to Jeff Conrad, Honda Div. senior vice president and general manager, the CR-V has been the number-one selling SUV.

So they know a little more about this segment than they are probably given credit for.

The segment that Jenkins is talking about includes vehicles like the Nissan Juke, Chevrolet Trax, Mitsubishi Outlander Sport, and Mazda CX-3 as primary competitors and the Fiat 500X and Jeep Renegade, as secondary.

And the product that Honda is bringing to the market is the 2016 HR-V. Conrad says they anticipate sales of the vehicle to be 70,000 units per year with half of the customers coming to Honda for the first time.

Naohisa Morishita, chief engineer and development leader for the vehicle, who is based at the Honda R&D Center in Tochigi, Japan, calls the HR-V a “new generation crossover.” And it is for a generation of people—Gen Y—who are a bit more strapped for cash than, say, Gen X, to say nothing of the Boomers. (Turns out that Honda does exceptionally well with the under 35-year-old demographic, where the HR-V is targeted: according to Honda analysis of data from IHS Automotive, either the Civic or Accord was the #1 vehicle in retail sales since 2004. Accord was #1 from 2004 to 2006 and in 2014. Civic ruled from 2007 to 2013. And now this younger cohort has something more focused on them.)

This generation is evidently one that is interested in something smaller. The HR-V is based on Honda’s Global Compact Series platform.

While there are some elements shared vis-à-vis the platform, the HR-V is not a Fit with a different top hat.

Consider the differences in dimensions:

Close, but no cigar.

Tsuya. That is a term that Morishita uses to describe what the development team used for the HR-V during the development of the HR-V. It has a lot to do with something that is, he says, seductive. Captivating. Alluring. While it is hard to imagine how something that’s not only made out of sheet metal but that’s a crossover could be seductive, captivating, alluring (the new NSX, yes, but an HR-V?), Morishita explains that while they were looking for something that has the utility of a minivan and the toughness and safety that are characteristic of an SUV, they worked to create something that would have more appeal both outside—with the sharp A-pillar that flows back to the C-pillar that, in turn, boomerangs back along the beltline—and inside, where the front seat passengers have a high H-point for improved ingress and egress on the one hand yet because of a tall and wide center console a feeling of being in something far sportier.

Back to that Fit comparison for a moment.

The engine has an aluminum block and a diecast aluminum alloy cylinder head. The pistons are aluminum, as well. The outer skirts of the pistons are coated (actually speckled, as the coating is applied in a dot pattern) with molybdenum for reduced friction in the bores. In addition to which, the skirts undergo plateau honing, a two-step process, to reduce friction. The connecting rods are crack-separated, which provides a custom, secure fit between the mating surfaces when reassembling.

Rather, the HR-V’s engine is based on that used in the larger Civic sedan.

Before leaving this powertrain discussion, it should be noted that the HR-V is available with two transmission, a six-speed manual and a continuously variable transmission (CVT). There are two drivelines, front-wheel-drive or all-wheel-drive (AWD). While the engine is derived from the Civic, the AWD system is predicated on that found in the now in-the-middle Honda SUV, the CR-V.

The six-speed is standard on front-drive LX and EX models; the CVT is available on those two and standard on the EX-L Navi model. Front-drive models can have either the manual or the CVT. AWD models are available only with the CVT.

To keep the vehicle light but safe, they’ve made use of high- and ultrahigh-strength steels in the construction of the HR-V, with the ultrahigh (>780 MPa) accounting for 27% of the body structure. Key areas for steel use: the front cross beam, upper A-pillars, roof side raids, lower A-pillar structures, lower side sills, upper and lower front frame rails,
and B-pillars.

An interesting aspect of the HR-V is that although it is arguably an entryway vehicle into the Honda lineup, there is an abundant array of available technology, ranging from such standard features as an electric parking brake, rearview camera, and steering wheel-mounted controls to higher trim level, 7-in. touchscreen display and leather seats.

Which is to say that the HR-V is designed and engineered not to be an econobox.

But speaking of boxes, it is worth noting that the HR-V offers as much as 58.8-ft3 of cargo space, which underscores that they didn’t lose sight of the “utility” in the category CUV.