One of the better ways to get a sense of the overall segment competitiveness of a vehicle is to talk with someone who makes his or her living selling vehicles of a different brand. After all, when you earn your daily bread by promoting the various virtues of the products that you represent, you get a fairly solid sense of what’s important to people. You become informed. Or you probably end up having to find something else to do for a living. So I met with a guy that I know that doesn’t sell Hondas and let him take a look at the 2016 Honda Pilot, a crossover that he sells against but hadn’t had the chance to see other than a quick occurrence at the North American International Auto Show in Detroit. The product that he has at his dealership is one that has its strengths and weaknesses like any vehicle. So it wasn’t like he was a proverbial Yugo dealer.

And as he looked at the gauges in the instrument cluster, sat in the driver’s seat, looked at the accessibility to the third row, opened the rear hatch and considered the available cargo space, as he considered and compared, he concluded: “I can’t wait for our new one to come out.”

Meaning, of course, that he was impressed.

And the Pilot is impressive. The vehicle debuted last year, bringing a look that is less geometric and more fluid, an appearance that some say reminds them of the other three-row vehicle in the Honda showroom, the Odyssey minivan. Which most certainly isn’t an entirely bad thing to be compared with were it not for the abiding minivan stigma. I think it is less like the Odyssey and more like the smaller CR-V, which is exceedingly popular in the market (which is not to say that the Odyssey isn’t, as it is more than holding its own in the segment, and there is a new one coming).

One of the things to know about the Pilot Elite is that it is, well, elite. Top-of-the-line. Fully featured. 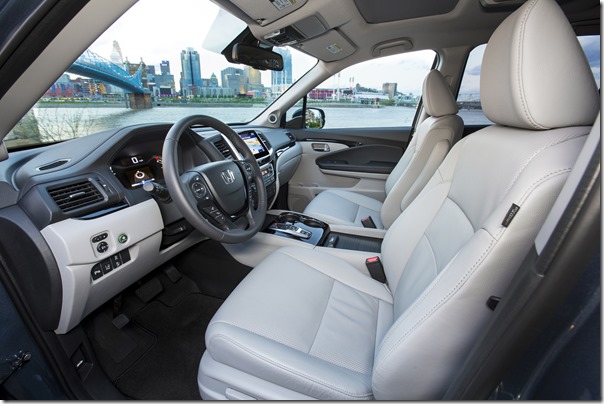 The MSRP is $46,420. Add in the destination and handling ($880) and you arrive at $47,300. The vehicle as driven has no options. Because it doesn’t need any. In terms of amenities, it has leather, and lots of it. And that leather-wrapped steering wheel is heated, to boot.

There is an 8-inch touchscreen display in the center of the IP for infotainment purposes and a 4.2-inch screen amongst the gauges for vehicular info.

Because this is a three row vehicle likely engineered to accommodate those who are young (or possibly young-at-heart), there is a Blu-Ray/DVD rear entertainment system with a 9-inch display, and because you might tire of Finding Nemo or whatnot, there are wireless headsets.

The Pilot is powered by a new 3.5-liter direct-injected V6 engine that provides 280 hp, which is useful when you have a vehicle of its dimensions. What’s interesting to note, however, is that this engine is mated to a nine-speed automatic transmission, which is roughly three gears more than might otherwise be expected. In addition to which, the vehicle not only has cylinder deactivation (i.e., depending on the demands on the engine, the Pilot can operate very nicely, thank you, on just three cylinders, and then when the demands increase there is an imperceptible transition back to the full complete complement), but it also has what Honda calls “Idle-Stop” and what is now referred to in more common parlance as start-stop: when the vehicle comes to a stop, say at a traffic signal, the engine shuts off but the radio keeps playing and the HVAC system keeps blowing; when the brake pedal is released in order to proceed, then the engine automatically starts; thanks to some clever engineering in the form of active engine mounts this is not a jarring event. (Under some conditions—like driving in severely clogged rush hour traffic—this start-stop may not be ideal; consequently there is a button on the center console that allows you to deactivate it.) This model has Honda’s “Intelligent Traction Management” system for its all-wheel-drive setup. Which simply means that when the conditions warrant, the capability is there, possibly before you know you need it.

As previously mentioned, the Pilot is likely to convey precious cargo (including yourself, which is undoubtedly priceless as far as you’re concerned) so there is the available Honda Sensing Package, which could be called the Honda Safety Package, as it includes a collision mitigation braking system, adaptive cruise control, lane-keeping assist, forward collision warning, lane departure warning, and road departure mitigation. And the basic structure of the Pilot, with plenty of ultra-high-strength steel, for example, is built on good bones.

As for my car-selling colleague: until his new one comes out, his old one doesn’t have much of a chance against the Pilot.