According to an estimate from Inside EVs, a web publication dedicated to all things electric vehicle, there were an estimated 1,360 Hyundai Sonata Plug-in Hybrids delivered during the first half of 2016.
#Autodata #Hyundai #HP

According to an estimate from Inside EVs, a web publication dedicated to all things electric vehicle, there were an estimated 1,360 Hyundai Sonata Plug-in Hybrids delivered during the first half of 2016. This more or less puts it in the middle of the pack, with the Mitsubishi i-MiEV at the bottom with 20 for the first half (the Mercedes GLE 550e is actually at 19, but that’s for one month) and the Tesla Model S at the top, with 12,090. According to Autodata, the total number of Sonatas delivered in the U.S. during the first six months of 2016 is 104,401, so you can see that the plug-in is but a fraction of the Sonata sales. (In fact, the entire list of vehicles on the Inside EVs chart accounts for just 64,802, so the Sonata handily outsells the entire fleet.)

Now it should be stressed that this is a plug-in hybrid. Which means that yes, there is a plug. Plug it into a regular 120-v socket and you’re going to get the battery charged in about nine hours. Use a Level two 240-v charging station and you’re talking about a full charge in something under three hours.

And that charging gets you an estimated 27 miles of electric driving. No gas.

The Plug-in Hybrid has a 9.8-kWh lithium polymer battery pack. Attached to the six-speed automatic transmission is what Hyundai calls its “Transmission-Mounted Electrical Device” (TMED) which is a 50kW electric motor. The device is in place of a torque converter. It powers the vehicle in EV mode. Because this is a hybrid, not a full electric vehicle, there is an internal combustion engine, a 2.0-liter, 154-hp, gasoline direct injected four. (When both the engine and TMED are powering the Sonata, the total system output is 202 hp.)

Now here’s where things get a little confusing. There is a Sonata Hybrid. Period. No plug. Just a gasoline fill nozzle.

The engine under the hood is the same for both vehicles.

Whereas the Plug-in can propel you down the road purely on electricity for 27 miles, the electric motor in the Hybrid provides tractive power that is supplemental, not primary.

So an advantage of the Plug-in is that 27 miles. After that onboard battery charge is depleted, then the Plug-in performs precisely the same way as the Hybrid.

However, there is a bit of a sacrifice to be made for those opting for the Hybrid, which is that the 9.8-kWh battery pack has to go somewhere. Given that the 1.62-kWh battery pack of the Hybrid is roughly a fifth of the size of the other one, it can be more conveniently packaged: it goes under the floor of the trunk. That leaves 13.3-cubic feet of cargo room in the trunk.

However, the 9.8-kWh battery pack is, in effect, in the trunk. So there’s just 9.9-cubic feet of cargo room, so I discovered that it is a good thing that there is a roomy back seat in the Sonata because I had to use it once the trunk was filled—and trust me, it’s not like I was stocking up on paper products at Costco. 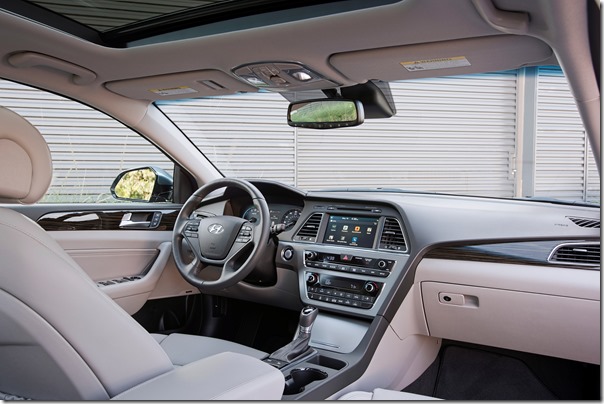 It should be noted that in addition to the electric range that the Plug-in provides, it has more pep under the throttle: whereas, as mentioned, the total system output is 202 hp, the total net power for the Hybrid is 193 hp. (However, the Plug-in weighs about 250 pounds more, so. . . .)

If you’re the kind of person who simply wants to buy a car without having to go through all of the rigmarole of picking this option or that, opt for the Limited trim.

And there’s a lot more included but I simply tired of typing it all. 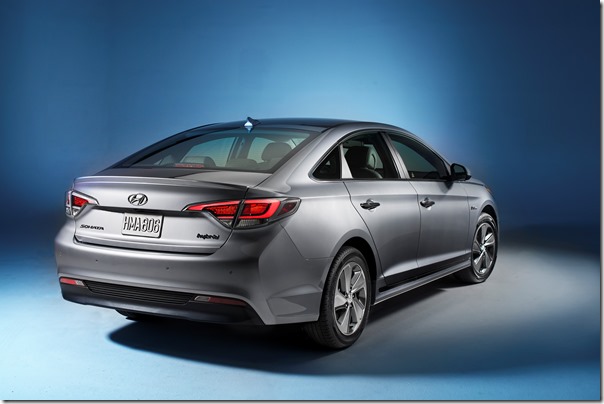 Styling is pretty much that of a standard Sonata.

I was in a parking lot, getting out of the Plug-in while a guy was getting into his car adjacent to me: he was driving a new Genesis. He smiled and nodded. Yes, Hyundai owners unite. Actually, I think that he thought that it was a Genesis, too.