According to Kelley Blue Book, in May (2016) the average estimated transaction price for a new light vehicle was $33,845.
#oem #Kia #Harman

According to Kelley Blue Book, in May (2016) the average estimated transaction price for a new light vehicle was $33,845. That’s the price that someone paid. Over a three-year period, that’s about 54 bucks a month.

And I think that you’d be hard pressed to find something that offers all that the Optima does at the sort of price.

I figured that the car had to be loaded up with options that would cause that $35,790 to climb smartly toward $40K.

But the fact of the matter is that the car is simply loaded.

There is a Harman Kardon audio system. An eight-inch color screen for navigation and which serves as the screen for the back-up camera. The seats are Nappa leather, and the two front seats are heated and cooled. There is a front collision warning system. A blind-spot detection system. Rear cross traffic alert. Autonomous cruise control. A surround-view monitor. Panoramic sunroof. Auto-leveling and dynamic bending HID headlights.

Importantly, the car is roomy for both people (the wheelbase is 110.4 inches and the width is 73.2 inches, both of which translate into making the five-passenger cabin more capacious) and stuff (the trunk measures 15.9-cubic feet, so there is plenty of capacity). 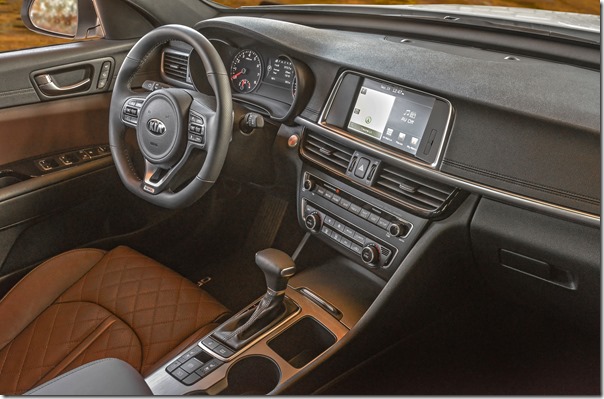 A number that is just as impressive as that MSRP is 26. That’s the EPA estimated combined miles per gallon figure (22 city/32 highway). In a week’s worth of both surface streets and freeway driving, without any extraordinary gas-saving driving, without deploying the Drive Mode selector that provides an “Eco” option (“Sport,” too), I got 29.6 mpg.

What’s astonishing is that this is a big car and the air conditioner was on more than it was off. It is construction season in southeastern Michigan, so there was a lot of idling.

Yet the 2.0-liter, turbocharged four was able to provide the power when needed and really remarkable fuel economy overall. Mind you, we’re not talking rocket power here, but it has the sufficient sauce to merge onto a freeway and pass without the need of prayer-provoked divine intervention.

If the Optima has an Achilles heel, it is not one of its own cause. It occurred to me more than once when parking it on the street or at a mall that it is a car, not a crossover, and everyone seems to be opting for crossovers, the stylish lines of the Optima notwithstanding. (I also noticed that even though this is a midsize sedan, not something small, due to the prevalence of things with higher rooflines it was sometimes hard to find the car in a lot.)

For some people it may be worth knowing that the Optima is manufactured in an impressive factory...in West Point, Georgia. Which may be as surprising to them as the MSRP and the mpgs are to me.