I remember the first time I saw Mazda’s KODO design language, with the sharp creases and surfaces that provided a sense of overall taut sheet metal and a notion that even a static object was moving. “Sure,” I thought. “That’s going to be considerably watered down to a certain pudding-like consistency by the time that it makes production.” Boy was I wrong.
#engineer #HP #Mazda

I remember the first time I saw Mazda’s KODO design language, with the sharp creases and surfaces that provided a sense of overall taut sheet metal and a notion that even a static object was moving.

“Sure,” I thought. “That’s going to be considerably watered down to a certain pudding-like consistency by the time that it makes production.”

So when the 2016 Mazda CX-3 was launched, it was the fifth vehicle in the company’s lineup to use KODO. 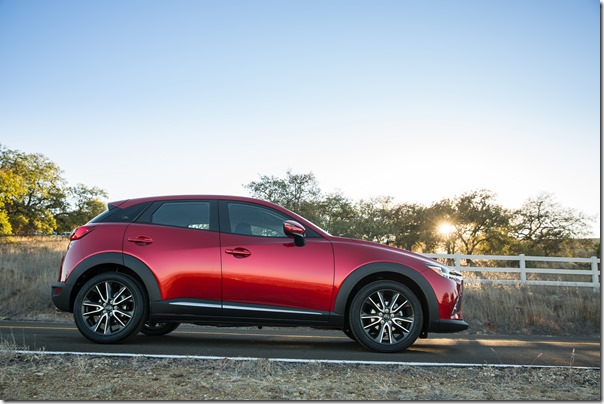 The CX-3 is a small crossover—as in “subcompact”-- that features a long hood, short overhangs, large wheels, and a tailored cabin.

In effect, Mazda has a Goldilocks strategy, with the CX-3 being the small crossover, the CX-5 in the middle, and the CX-9 on top. It seems as though the product planners at Mazda have determined that it is probably a good idea to make sure that the CX-3 is sufficiently compelling such that as one plans to move up it is a matter of moving up within Mazda, not moving out to another brand. The vehicle as driven features the SKYACTIV-G 2.0-liter engine that produces 146 hp and 146 lb-ft of torque.

As the vehicle—with an all-wheel-drive setup—weighs just 2,952 pounds, that is more than enough to get it moving. (And let’s be real: this is a vehicle that has AWD for purposes of, say, inclement weather, not traversing mountainous terrain.)

There is a six-speed automatic transmission. As a Mazda it offers manual shift and Sport modes. Not to be judgmental or anything, but does someone really need those functions for what is arguably something that people will be bopping to the grocery store or out to a movie in?

Inside the cabin, for the Grand Touring trim, anyway, a nice array of features. While I may be skeptical of the need for sport shifting of the automatic transmission, I do thing that the suede used in the seats—something that is ordinarily deployed in sporty vehicles because of the coefficient of friction that suede provides in order to keep one’s posterior planted in cases of sporty driving—is a nice touch.

However, there are a couple of things that I think are less good. There is a compact center console that serves as an armrest that doesn’t seem to be particularly robust. I wonder about the long-term viability of it. And one of the features offered on the CX-3 is a heads-up display. The display is a piece of smoked clear, slightly curved, plastic about the size of an index card that flips up from the top of the dash, right above the instrument cluster in the driver’s line of sight. The purpose is to provide information (e.g., speed) without having to take your eyes off the road. While it serves that function well, the execution appears to be somewhat thrifty, and it seems that in the context of the rest of the interior (as in knobs that seem almost Germanic, in a good way) the goal is to be perceived as upscale, not along the lines of that technology you can buy at your local CVS. 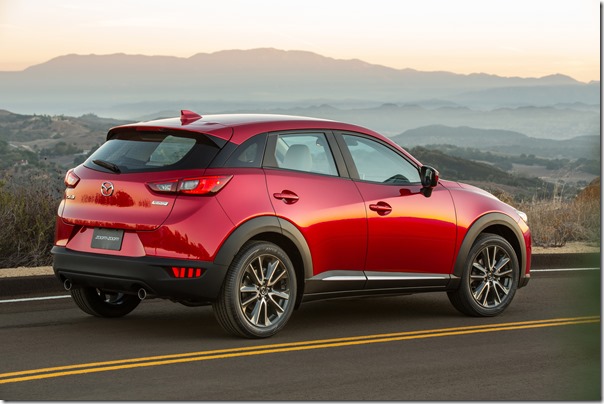 One thing that may be slightly surprising to those considering a subcompact crossover is that the top-of-the-line CX-3 Grand Touring AWD with options (particularly the $1,920 GT i-ACTIVESENSE package that includes radar cruise, smart city brake support, lane-departure warning and other features) comes in at a price, including destination ($900), of $29260.

Don’t get me wrong: it is certainly worth the price. But do recognize that “subcompact crossover” doesn’t mean “substantially low price.”