The thing about the Toyota Tacoma is that it is built for banging around, and it is not sorry. 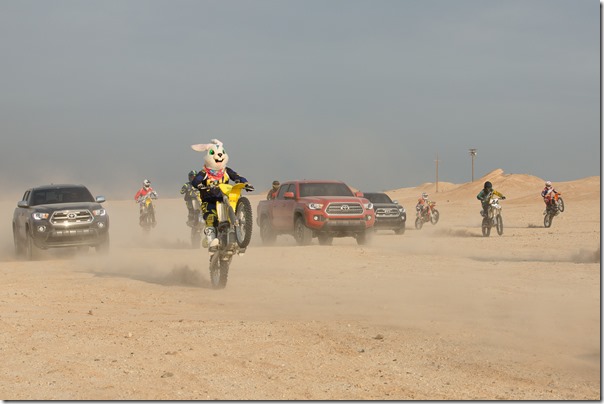 That is, there has been the, in effect, gentrification of pickup trucks. They’ve gone upscale. To be sure, people like comfort and amenities. Seats that are easy on the posterior. Things like navigation and satellite radio. An interior that doesn’t seem to have been put together from the Vinyl-o-Rama outlet mall.

However, it seems as though the proverbial pendulum has swung to a place where not only are crossovers and SUVs the new sedans, but pickup trucks are the new sedans, too.

This is not to say that pickups of any type have lost their capability, because they all still have beds on the back to handle stuff of various sizes, masses and consistencies. And all are offered with a 4x4 optional capability, so there is more than the average amount of capability, certainly more than in the family midsize sedan (with the 4x4 capability being about handling terrain, not getting away from stoplights with alacrity).

But I’ve certainly gotten the sense from several pickups that they’ve become the sorts of things that you don’t want to climb into with dirty shoes, to say nothing of boots. They’re really nice inside. You might even wear a cravat while driving one. And break out the Grey Poupon. Which is not to say that the interior of the Tacoma seems like a construction site trailer’s environs. In fact, whether it is the seat material or the thoughtfully designed (thoughtful, but ruggedly designed: we’re not talking eggheads here) instrument panel, the Tacoma is well done. But it is something that you’re going to clamber into after hunting or fishing or surfing or whatever and not give it a second thought, not think about how your mother once kept you off the furniture with your dirty jeans—even if you thought they were clean. 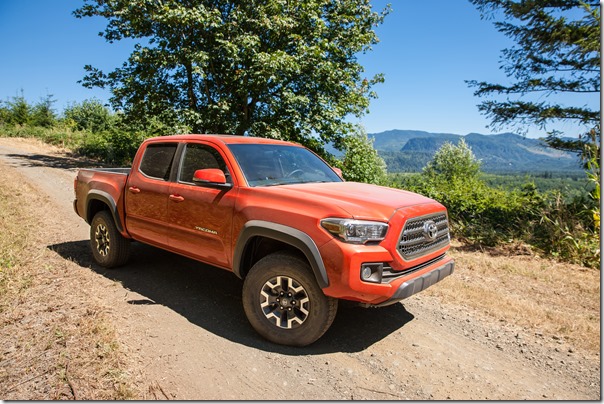 Now the truck in question has the word “off-road” in its name, so you know that they’ve done more than a little something that makes it capable of eating dirt. Like specifically tuning the suspension and adding Bilstein shocks.

The TRD stands for “Toyota Racing Development,” and while TRD is most certainly involved in series like NASCAR Sprint Cup, it really made its bones in off-road racing. The truck has a 278-hp 3.5-liter V6 that provides 265 lb-ft of torque, so it has the muscle to move. The double cab truck can tow 6,400 pounds if you get the tow prep package (Class IV towing receiver hitch with transmission oil cooler with water and air cooler, 130-amp alternator, 4- and 7-pin connector, and Trailer-Sway Control).

Yes, there are amenities in the truck. Like Entune Premium Audio and the Integrated Navigation and App Suite that’s shown on a seven-inch touch screen.

Bottom line is that there are cushier trucks that you can select. Heck, if you’re looking for plush, Toyota has a Tundra 1794 Edition that will make you feel like you’re back in the Wild West—and happened to own the town.

But the Tacoma TRD Off-road 4x4 Double Cab is a blast—and the people at Toyota seem just fine with that.