With the exception of Formula One fans, chances are that most people in the U.S. who think about “Mercedes-Benz” think “purveyor of luxury cars.” (Perhaps now “crossovers and SUVs” might be added to the descriptor, but somehow “Lord, won’t you buy me a Mercedes-Benz” doesn’t seem to have a GLS as its payoff.) And should you say to some subset of people “AMG,” they know that that has something to do with “performance” variants of Mercedes vehicles.
#Daimler #engineer #oem

With the exception of Formula One fans, chances are that most people in the U.S. who think about “Mercedes-Benz” think “purveyor of luxury cars.” (Perhaps now “crossovers and SUVs” might be added to the descriptor, but somehow “Lord, won’t you buy me a Mercedes-Benz” doesn’t seem to have a GLS as its payoff.)

And should you say to some subset of people “AMG,” they know that that has something to do with “performance” variants of Mercedes vehicles.

So for those who are interested, AMG is a company that was established in 1967 by two former employees of Mercedes, Hans Werner Aufrecht and Erhard Melchert, whose surnames provide the “A” and the “M.” The “G” is not like “Inc.” Rather, it goes to the name of the town where Aufrecht was born, Großaspach. 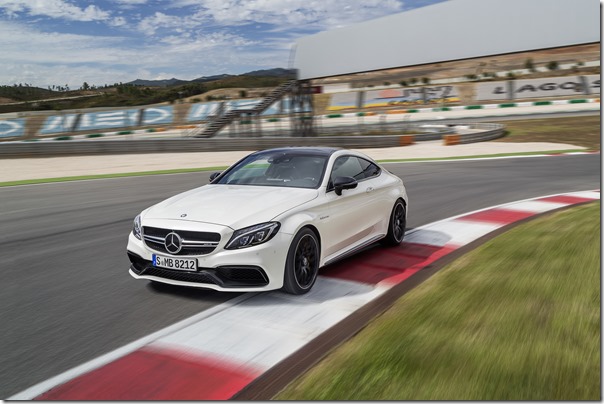 The original name of the company had a few words behind those letters. Translated from the German, they are “Engine Production and Development.”

Because when it came to modifying Mercedes vehicles for Aufrecht and Melchert, it was about what was under the hood. And one of the things that they concentrated on was creating superior racing engines for vehicles with the tri-star badge.

And speaking of badges with stars, it is worth noting that in 1999, the company known as “DaimlerChrysler” took 51 percent of AMG, which resulted in the renaming of the company, based in Affalterbach (not Großaspach), Mercedes-AMG GmbH. The badge with stars: The Chrysler pentastar, of course. 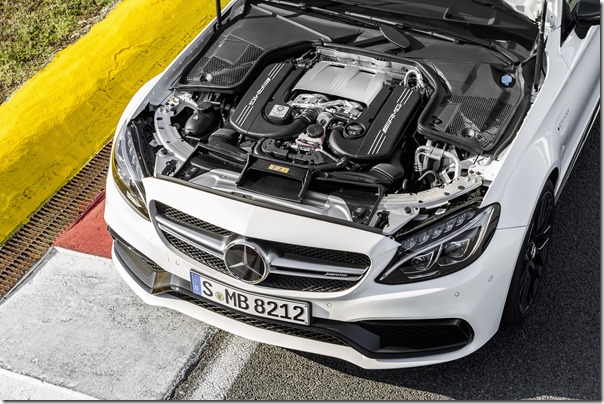 Anyway, in 2005 DaimlerChrysler ended up with all of the shares of the company.

(For those who are wondering: DaimlerChrysler ceased to exist in 2007, when Daimler sold Chrysler to Cerberus.)

There is one thing that you need to know about this car, which is the performance numbers for the handcrafted—this is one thing that AMG is known for, the particular attention and care—4.0-liter bi-turbo V8 that produces 503 hp and 516 lb-ft of torque. Yes, the outfit that started out creating engines for racing has gone to work creating an engine that sits beneath a long hood of a stylish car that you can take to the grocery store. (With alacrity.) 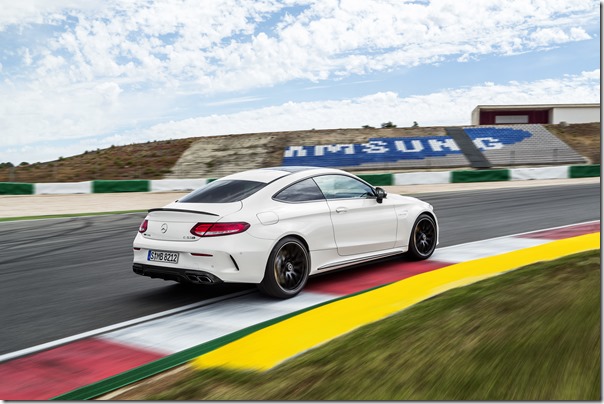 That is, this vehicle, which weighs about 3,900 pounds (which means that for every seven-and-a-half pounds or so, there is a horsepower to move it), has a 0 to 60 mph time of 3.8 seconds and a top speed, electronically limited for your convenience, of 180 mph. Which means that when you go Krogering, you really get there.

There is an AMG SPEEDSHIFT MCT seven-speed transmission that you can let select the gears for you or you can use the paddles on the steering wheel to do it yourself. Chances are unless your surname is Rosberg or Hamilton you’ll have your hands full without having to tap up or down.

And there are AMG dynamic engine mounts, and AMG dynamic exhaust system (which really makes that engine sound great), AMG RIDE CONTROL sport suspension (which is engineered to allow the vehicle to maneuver with the response you need in a car with such capability), an AMG electronic slip differential, AMG high-performance braking system. . . .

You get the picture.

This isn’t some car where it gets a badge from a performance builder and not much else.

Inside there is a visual message that this isn’t just any coupe that looks fast. There is the use of a “Red Pepper” color accenting that black Nappa leather. The red accents throughout may be a little over the top for some people. The car itself probably is, too.

It is based on the C-Class Coupe. But the aforementioned hood is 2.36 inches longer than the standard model, and that hood has power domes because, well, that engine is as previously described.

Another big change from the regular model: there are wheel arches that are to the C-Class what the St. Louis Arch is to a local McDonald’s: these allow the placement of tires that are 10-inches wide in the front and 11.2 inches in the rear.

One feature of the AMG C63 S Coupe that is a nod to preserving the planet is that it has a start/stop system. I don’t know whether it was the particular model that I was driving or not that had this characteristic, but when the engine shut off and then restarted when I put my foot back on the accelerator, there was the sound of the engine gurgling hard before the forward motion commenced: if it isn’t a feature, it ought to be because it gives you a sense that you’re driving something with serious power.

Which wends our way back to the start of this, regarding “Mercedes” and “luxury.”

This car has a base MSRP of $75,000. The version that I had the opportunity to drive—which includes a number of options, ranging from a technology package (everything from a blind-spot assist to an 8.4-inch touchpad to an electronically closing trunk) for $5,500 to a $925 parking assist package—had a total retail price of $102,435.

This is a serious car in more than one way.