Here’s something important to know about the 2017 Audi Q7 as it is a vehicle that seats seven and, consequently, is likely to carry passengers: The Insurance Institute for Highway Safety has awarded it with the Top Safety Pick+ designation, which is the highest possible rating from IIHS for 2016. 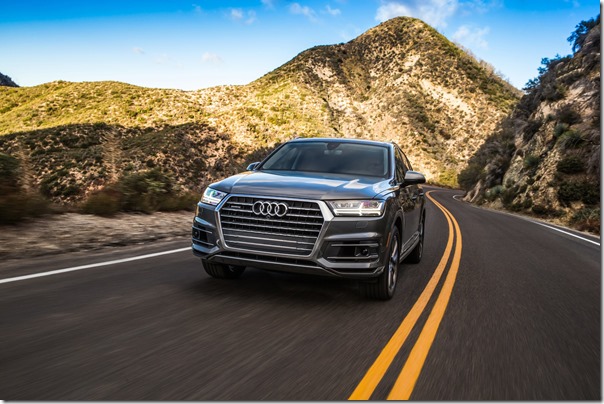 There are two aspects to achieving this high rating. One is structural. The other is safety tech. The first is about crashworthiness under a number of conditions, so know that the vehicle is fundamentally constructed for keeping the driver and passengers safe.

Although there is an extensive use of aluminum throughout the vehicle to reduce overall mass, hot-stamped steel (the reason that it is hot stamped is because it is so hard that it is necessary to use heat to soften it up so that it can be formed, but when it cools it becomes really strong again) is used to create the passenger cell (e.g., the B-pillars, side sills, etc.).

But it is worth noting that they are such things as highly engineered aluminum components such as the front longitudinal members that absorb energy in the case of collisions.

So that’s the structural aspect. 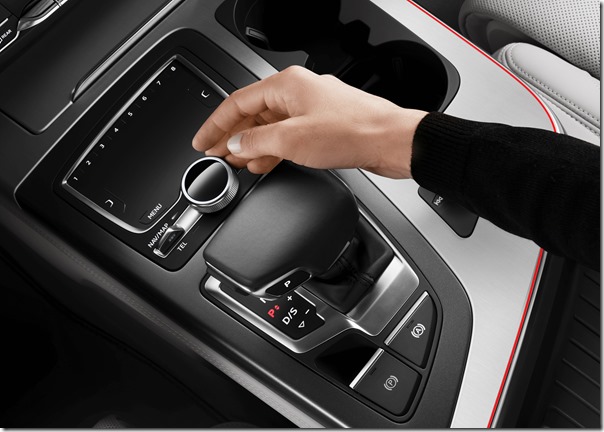 The surface ahead of that knurled knob allows navigation input by spelling out the place or address with your finger: there’s handwriting recognition

As for the other part, the crash avoidance and mitigation, the Q7 is rated by IIHS as “superior” thanks to its “pre sensing” system operates at speeds up to 52 mph and that helps prevent or lessen the severity of collisions. The front camera (located by the rearview mirror) looks out ahead of the vehicle by 328 feet (a.k.a., 100 meters). Should it detect that there is a potential intersection with another vehicle or pedestrian, it warns the driver and deploys automatic braking if necessary. Audi calculates that at speeds up to 24.9 mph the system can avoid accidents. At speeds higher than that, it reduces the impact. What’s interesting to note is that the system actuates the brakes in such a way that skidding—and potentially additional collisions—is avoided. What’s more, the front seat belts are electrically tightened, and if the windows and sunroof (and know that the Q7 offers a MASSIVE two-panel sunroof) are opened, they’re automatically closed. Yet thanks, in large part, to the aforementioned materials, the engineers have managed to make the Q7 comparatively light.

Why do you care how much it weighs?

Simple: because it has a considerable effect on handling dynamics, and when you’re piloting something as large and as massive (yes, it is light but you’re still leading with 4,938 pounds), you want all the advantages you can get.

It should be noted that the vehicle—as one should expect from a full-size SUV, offers quattro drive, which means permanent all-wheel-drive capability for those untoward conditions. (Under normal circumstances, the center differential distributes power front to rear 40/60; in the event of grip loss, as much as 70 percent of the power can go to the front and as much as 85 percent to the rear.) Also, there is wheel selective torque control that uses braking to adjust wheel torque during cornering.

In addition to which there is the ability to select from drive modes “efficiency,” “comfort,” “auto,” “dynamic,” “individual,” and “offroad.” As regards power, there is a supercharged 333-hp V6 mated to an eight-speed automatic transmission. According to Audi it goes from 0 to 60 mph in 5.7 seconds and has an electronically limited top speed of 130 mph.

And in terms of the interior: know that Audi has been the benchmark for interior quality for many years. It still is.