The Buick design team deserves the strongest of accolades for their work at transforming the appearance of the brand from one of, well something akin to “the last ride” to one of contemporary stylishness befitting of a the cohort of automotive customers who didn’t cast their first presidential ballot in 1968 or earlier.

While I have previously thought that the “That’s a Buick!?” commercials were off-point, given the utter transformation of the sedan in question, I truly thought, in effect, “That’s a LaCrosse!?” when I first saw the vehicle. 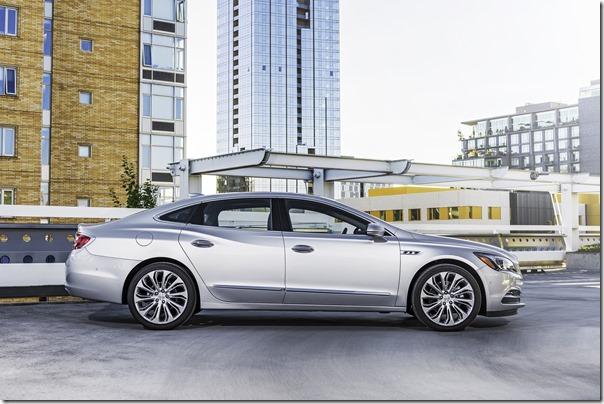 I can think of no automotive brand that has undergone such a profound change in styling—in a positive way, I should add—in the last several years. One could say that perhaps when Cadillac brought out the first generation CTS in 2002 (model year 2003) that there was a similar change to what’s going on in the Buick showroom.

And in many ways, what Cadillac has done in changing its position in the market (let’s face it, it was pretty much the car that was popular among the well-heeled who were retired and needed to buy American) is what Buick is doing with striking designs.

The 2017 LaCrosse is long, low and wide. It is a full-size sedan that doesn’t appear in anyway to be like a blobby barge on wheels. It is sizable—but sleek. 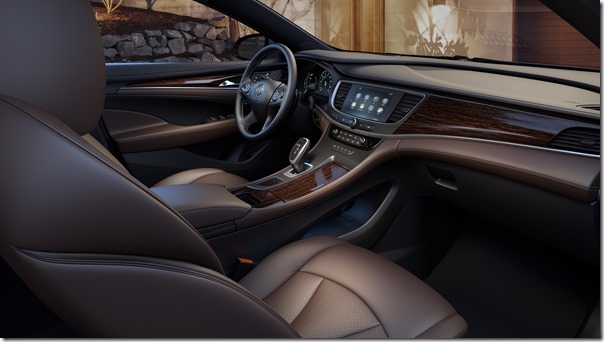 And what is more than somewhat remarkable is that the starting MSRP for the sedan is $32,900, which means it is a lot of car for the cash—although one is likely to add things to bring it to a higher trim level, because it brings the goods like AWD on the top trim level, as driven here, as well as electronically controlled damping control for the suspension that allows adjustment for softer or stiffer setups, depending on how you’re driving (i.e., in an area strewn with potholes, the touring grade is best; when you have the opportunity to drive on roads that are smooth and curving, sport is where you want to be).

(One of the more amusing names for an option package—it may be accurate in what it delivers, but still seems sort of funny—is “Driver Confidence Package.” There are actually two of them. One is available on the Essence trim, which is just behind the top-of-the-line Premium package, on which it is standard: rear cross-traffic alert and side blind-zone alert with lane-change alert. Then the second package is available on Premium: automatic park assist, front pedestrian detection, front automatic braking, and full speed-range adaptive cruise control. I don’t know if they make one feel more confident, but they surely are useful in most driving conditions.)

The LaCrosse comes with a 310-hp 3.6-liter V6 engine that’s mated to an eight-speed electronically controlled transmission. A word about the transmission shifter. Unless you’ve just started driving (and I have to say that if you just started driving, chances are you aren’t reading this), you’ve spent most of your time behind the wheel with a gear selector that’s essentially a mechanical device that you pull or push some inches or fractions thereof into position. With the setup in the LaCrosse, you’re moving it in the fractions thereof category, which can seem somewhat strange at first. To put it in reverse the movement is up and to the left. To put it into drive it is straight down. In both cases, there is a button on the side of the handle that you depress with your thumb. And to put it into park, there is a button on top that’s engaged. I’ve got to say that I found it a bit difficult when switching from drive to reverse multiple times maneuvering into a tight parking place in a street lot during Industry Days at the North American International Auto Show (NAIAS), when the lot owner wanted to get every possible vehicle he could onto his property. 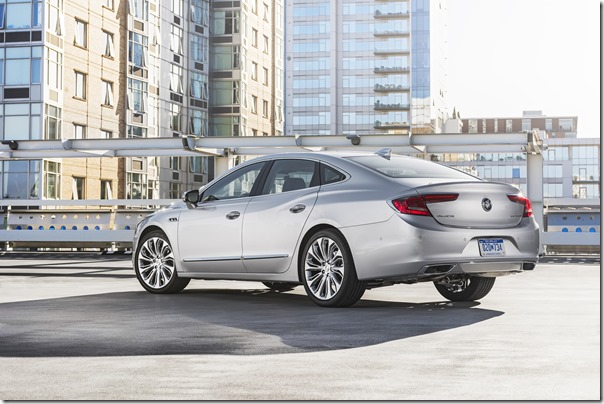 That said, I found the AWD and the overall performance of the car absolutely superb when I was driving down to NAIAS one snowy morning.

Buick has been promoting its “QuietTuning” for the past few years. The operative word in that combo is “quiet.” In a stately sedan like the LaCrosse, you surely don’t want road noise, wind noise or other noise that comes from outside the cabin. And they’ve accomplished that in good order in this car.