It must strike some people as rather amusing that essentially every vehicle manufacturer in the known world—and probably also in parts unknown—is busy chasing the development of crossovers and sport utility vehicles. I mean, when you have companies even like Rolls-Royce prepping their entry into the segment, you know that this is a place where companies are confident they must be.

And those some people, in particular, probably work at GMC. That’s a General Motors division that has done nothing other than trucks throughout its entire history. The company had its start in 1901, when the Grabowsky Brothers established Rapid Motor Vehicle Company in Pontiac, Michigan. They made trucks. In 1909 General Motors bought the company. It also bought Reliance Motor Car Company in 1909. It merged the two in 1911 and GMC was officially launched in 1912.

(There is always some speculation that the “G” in the name is a tribute to Max and Morris Grabowsky. It probably isn’t.)

The point is, the folks at GMC have gotten damned good at this non-car thing over the years. And it is worth noting that in 2016, GMC’s sales performance came in second to Chevrolet and ahead of both Buick and Cadillac. Compared to 2015 Chevy was up 12.7 percent, GMC 5.8 percent, Buick 2.8 percent, and Cadillac 3.2 percent.

For model year 2017 the GMC Acadia is an all-new vehicle.

What is utterly uncharacteristic of vehicles of any type, the new model is actually smaller than the one it replaces. The clever thing is that the 2017 Acadia isn’t small. It is still a sizable vehicle. And while the word “nimble” might be a bit of an exaggeration, it really is much more maneuverable than its predecessor (thanks, in part, to the electric, variable-assist power steering), and while it feels “lighter,” it is no less planted on the road. So while it provides the space to carry people and cargo, it is still something that it more readily inserted into a garage.

About the people part. The Acadia is available in a number of trims. GMC has had its Denali upscale level on offer for a number of years and that is where you’re really getting into the refined space. For the 2017 model year it is added another lever, All Terrain.

Part of All Terrain—which is the vehicle I drove—is cosmetic. As in having a body-color grille surround, black chrome trim and special wheels on the outside and on the inside covered storage bins and All Terrain labeled seats.

Whereas the Acadia basically is a three-row crossover, in the case of the All-Terrain version, it is a five-person setup, with the area that would otherwise have the third row being available for additional cargo, including a cargo-management system.

But this is not all show and no go. The All Terrain version also has an all-wheel-drive system with what’s called “Active Twin Clutch,” which is said to optimize traction. And while other Acadias with AWD have an “Off Road” mode on the drive mode selector, the All Terrain has, well, an “All Terrain” mode, which is oriented toward hill climbing.

That said, I’m guessing that the All Terrain Acadia is going to spend more time at shopping malls than Moab. 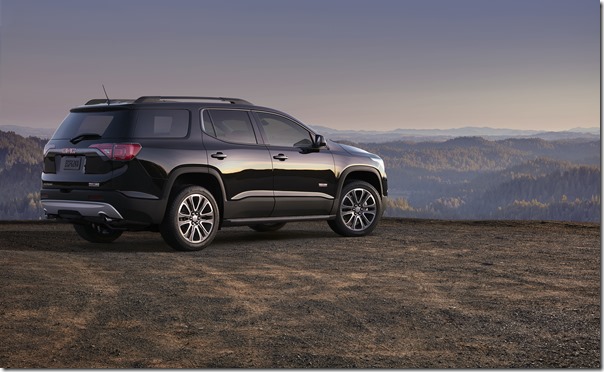