Swindon, England, has what is called the “Magic Roundabout.” It consists of five roundabouts that surround a sixth. The five smaller ones run clockwise and the one in the middle counterclockwise.

I don’t know what’ is “magic” about it. It sounds like it could described as the “Nightmare Roundabout.” I can imagine people driving along, getting centrifugally thrown from one to the other, almost endlessly.

Now you might be wondering what this has to do with the Civic Hatch Sport Touring. It’s that the car is actually built in Swindon. 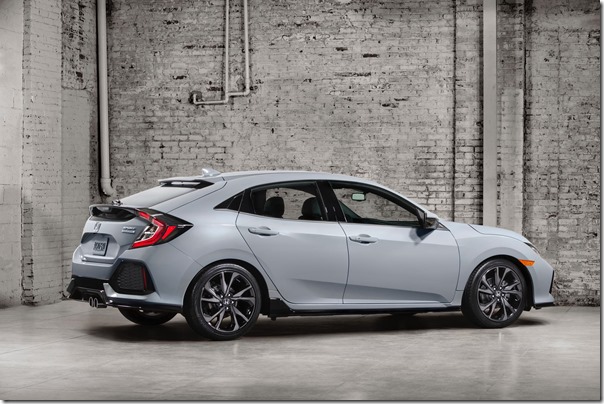 And I think that it might be exactly the kind of car that one would want for that locale, as it is compact in size and peppy in performance, meaning that you can spin from one traffic circle to another post-haste, that you can quickly maneuver to wherever it is that you’re going (Cirencester, Marlborough. . .) while in full control of getting there, as others tentatively or aimlessly go around and around and around.

That’s because the vehicle has a 1.5-liter, direct-injected, turbocharged 1.5-liter DOHC four cylinder engine under its hood that produces 180 hp—and because the vehicle weighs just 3,010 pounds, which means there’s a good amount of horsepower moving a not particularly large mass.

The Sport Touring trim level for the car--there are four others, with all but the Sport featuring a still-respectable 174-hp engine (the Sport also has 180)--brings an aero kit and LED headlights that add a go-fast appearance to the outside of the car and metal pedals for a hard-driving look on the inside.

It is equipped with a CVT, not a manual (the Sport gets a six-speed manual), so there are two pedals, not three, although for those who want to quickly downshift to get a little more oomph to escape a traffic circle, for example, there are paddles to shift on the steering column. 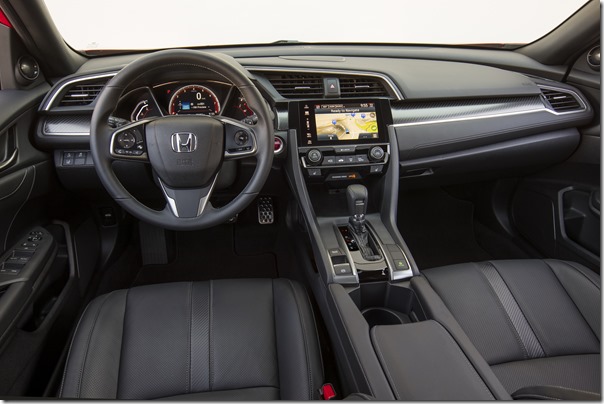 And as steering is something that is rather important for precise maneuvering, there is an electric power-assisted rack-and-pinion setup, which is really quite responsive whether one is maneuvering in a parking lot or making a move on a freeway.

Although this is described as a “hatchback,” for those who recall Honda hatches of yore (a term probably used more frequently in Swindon than around here) the 2017 lacks the somewhat severe rear truncation that had been characteristic of those earlier models. The current design might be better described as a “five-door,” as the roofline sweeps back and doesn’t simply fall with a somewhat more-severe diagonal line. 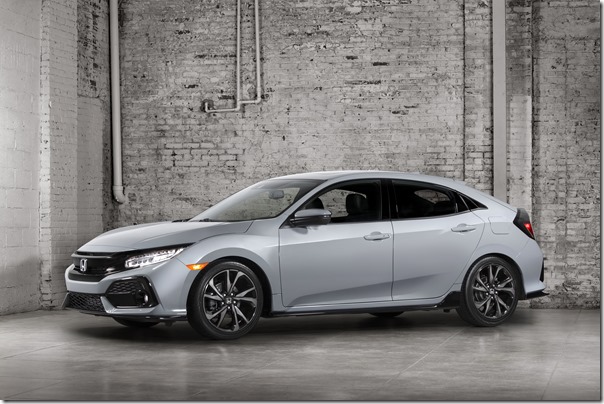 The overall design of the car is executed, however, with a series of sheer surfaces and edges such that simply slicing the rear would be, perhaps, overkill, to say nothing of the fact that it wouldn’t facilitate the rear spoiler on the trailing edge of the backlight.

However, the exterior aero bits make the car look quick even when not going anywhere, which is undoubtedly the point: if you’re going to buy something with the word “Sport” as a descriptor, then it damn well ought to look sporty.

The Hatch is part of the 10th generation Civic lineup, a vehicle that Honda has taken more than a minor amount of care in devising and executing. One of the things that they obviously have tried to accomplish is to bring back the “fans” of the model, and the Hatch Sport Touring is clearly for those who need four doors but want something that also has some hot-hatch-like performance to it. Yes, you can take it to the grocery store to buy milk. But you’ll probably come back with a case of Red Bull.