The Mazda slogan “Driving Matters” pretty much sums up the 2017 MX-5 Miata Club RF. It is meant to be driven, period. 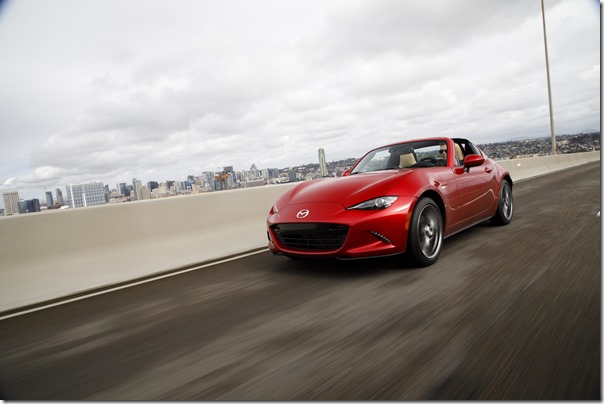 An issue, however, is where it is meant to be driven. And therein lies a bit of an issue.

1. You don’t want to drive it in the parking lot of a Costco for two reasons: (a) you’ll be surrounded by full-size SUVs and you won’t be able to see a damn thing when trying to back out of a parking space (there is no backup camera) and (b) unless you’re picking up, say, one package of Charmin and one of Bounty, you’re not going to have anywhere to put them, and if you have a passenger, you’re going to have to leave one of those two items behind (a friend, when looking into the trunk, said with some surprise, “You can’t put a set of golf clubs back there”—which brings us to the point of Driving Matters, and not with a Callaway).

2. You don’t want to drive it on a freeway on your daily commute because chances are you’re going to find yourself stuck in traffic and (a) you’re going to get tired of engaging and releasing the clutch as you inch ever so slowly forward and (b) you’re probably going to be sitting in minor terror, wondering when that ________ (use your own descriptive term) in the F-150 is going to merge from his lane into yours because he simply can’t see you. One could make the argument that with the 155-hp, 2.0-liter engine there’s the ability to zip along in traffic. Yes, one can make that argument.

What you do want to do is drive it in the sorts of places where they shoot TV commercials, where there are the smooth two-lanes with wide, sweeping turns that lead into a sequence of quick S-es that you carve like a Messermeister in a tenderloin. (Ideally there is an ocean on one side, and graceful rolling hills—that contribute to elevation changes on the tarmac—on the other.)

Of course, most of us drive to work every day on roads that are more Kevin James and less George Clooney. 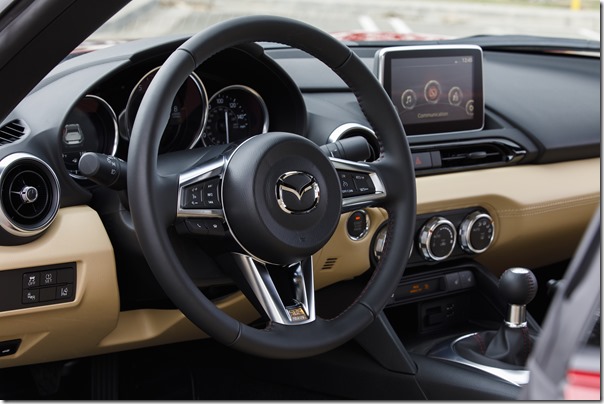 One thing that is non-driving related about the car and absolutely exquisite is the exterior design. The sheet metal is formed in a fashion that seems more like something that would be found in a museum rather than in the museum’s parking lot. Yet it is undoubtedly the case that the forms are as functional as they are fluid. You get the sense that this is purposeful beauty.

On the inside things are not quite as remarkable. The seats have sufficiently firm cossetting and the steering wheel has a nice diameter for grip. But realize that there isn’t a whole lot of space to put things and while there are two spidery cupholders, it seems as though they are there simply because someone might ask at a dealer, “So, does it have any cupholders?” as though it might be a deal breaker. It would probably be a heartbreaker were you to put a hot beverage in one of them and then, after cutting a corner, discover that the fluid is obeying the laws tidal forces. There is a infotainment screen and a nicely knurled nob in the center console that allows scrolling through the menus, but I found myself accidentally pressing down on it while resting my right arm on the surface. 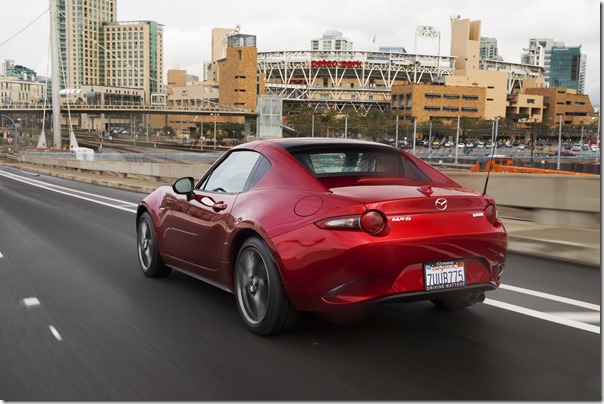 This is a serious car for people who don’t have serious money. The base MSRP for the MX-5 RF (I failed to mention that this is a retractable hardtop, which is certainly nice for the previously described roadways, and it also means more torsional rigidity for the vehicle than were it a soft-top) is $31,555. Add the Brembos and the 17-inch BBS alloys, and you’re looking at—including $835 destination--$35,790.

Ideally, one would have this car and another. Sure, the Miata can be one’s only car, but that would probably be predicated on being a single person who doesn’t spend a whole lot of time shopping, driving on congested freeways and looking for lots of interior real estate.