Perhaps the reason why the Prius Prime looks the way it does is because of the success of the three previous generations of the car that became the name for “hybrids” the way that “Kleenex” has come to stand for “tissue,” even though no one has probably ever called another vehicle manufacturer’s hybrid a “Prius,” which is certainly not the case with the object one reaches for when a sneeze is imminent.
#Toyota #oem

Perhaps the reason why the Prius Prime looks the way it does is because of the success of the three previous generations of the car that became the name for “hybrids” the way that “Kleenex” has come to stand for “tissue,” even though no one has probably ever called another vehicle manufacturer’s hybrid a “Prius,” which is certainly not the case with the object one reaches for when a sneeze is imminent. 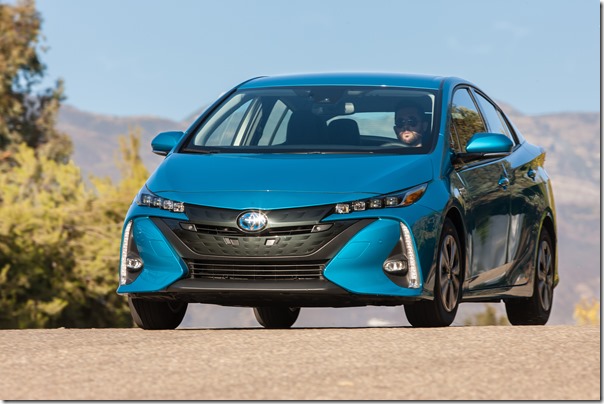 Rightly or wrongly, there was probably the notion in Toyota City that this current generation Prius would have legs like its predecessor, so rather than designing a car that would look mainstream right now, they’d have a form that would look good many years hence. In other words, they designed a body that looks like a car from the future. (This is also the case with the Mirai, the fuel cell-powered Toyota, which, given the very limited number of cars that are filled with hydrogen available today, is certainly a bet on the future.)

If you can get past the creases and edges, the undercuts and undulations, know that the Prius Prime is a plug-in hybrid that gets incredible mileage. If this was the past, when gasoline prices were staggering for Americans (but a bargain for those from other parts of the planet), exterior design or not, this would probably be giving the Camry a run for its sedan dominance in the market. It is really that good.

Under the hood there is a 1.8-liter Atkinson cycle four-cylinder engine that produces 95 horsepower. Which might cause any but the most environmentally adamant to roll their eyes. But that’s supplemented with what’s called “Motor Generator Two,” which helps drive those front wheels either alone or supplemental to the internal combustion engine. All in the net system horsepower is 121, which is certainly more conventional than that 95.

Something that needs to be stressed about the Prius Prime is that were it not for the fuel door that opens on the rear quarter on the passenger side and exposes a plug, not a pipe (there is a charging cord in the cargo area) you probably wouldn’t know that it is a plug-in hybrid, assuming that your notion of a hybrid is something that is sluggish. This is not to say that this is some sort of performance vehicle, because it certainly isn’t (unless your metric for performance is not 0 to 60 but mpgs). It simply rides and handles like a compact car, and is much more competent in those characteristics than its predecessor (as it is based on a new Toyota architecture for which one of the development objectives was to address them). 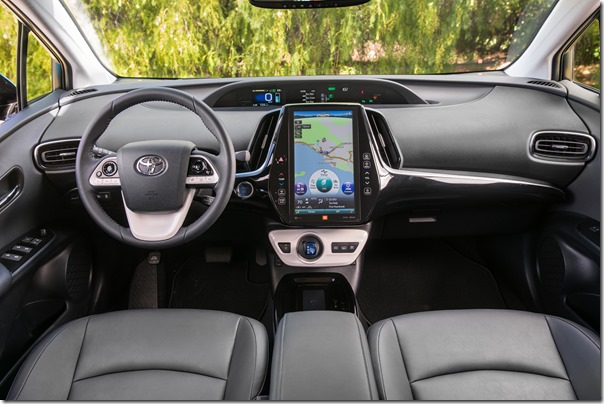 The “plug-in” part of this vehicular equation means that there is that aforementioned ability to drive sans-engine, purely on the electricity that’s stored in the lithium-ion battery pack. The range is on the order of 25 miles purely on electric power. Which means that when you start driving the Prius Prime (assuming it is fully charged) you get miles-per-gallon readings that are well above 100 (the EPA estimated electric number is 133 MPGe). When that runs out and you’re operating in the conventional hybrid mode, the number is more like 55 mpg.

The plug-in portion allows you to charge up the battery at home on a “normal” socket in about 5.5 hours. Should you have access to a 240-volt charger (such as at a public charging station) then you’re looking at about two hours. 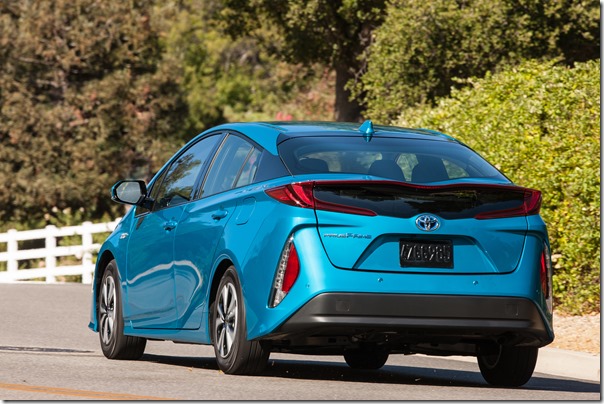 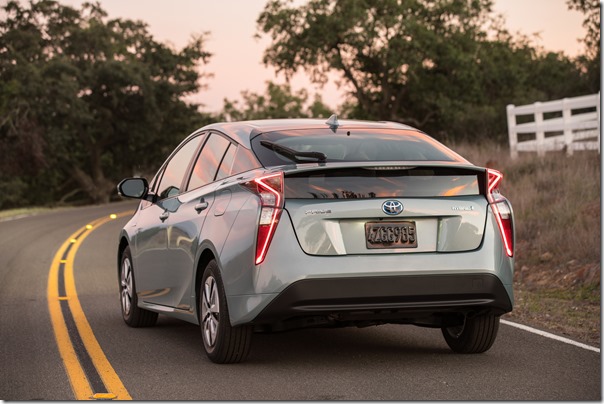 It should be pointed out that the Prius Prime is different than the Prius liftback in more than just the plug. This is most notable when looking at the backs of each of the cars, with the liftback being much more vertical in execution and the Prime more horizontal.

With gasoline prices in the U.S. being as low as they have been for the past several months, Prius models are down overall by about 20 percent for the first six months of 2017, a number that would be higher were it not for the Prime. For those who are looking for a plug-in, it is a solid consideration.

But for those who want to drive the future and who aren’t geographically capable of getting a Mirai (there is that whole hydrogen infrastructure thing to contend with), then it is hard to do better than the Prius Prime, based on the fact that it is based on the fourth-generation Prius and no auto manufacturer has more experience in hybrid space than Toyota.