Last month at the Autostadt in Wolfsburg—an automotive theme park and education center created by Volkswagen Group, and which is not only a tourist destination but a delivery center for Germans who have ordered VWs—there was a presentation of “Vocho Teotihuacano.” As you may have noticed, the name of that artwork is in Spanish, not German.
#supplier #Apple #oem

Last month at the Autostadt in Wolfsburg—an automotive theme park and education center created by Volkswagen Group, and which is not only a tourist destination but a delivery center for Germans who have ordered VWs—there was a presentation of “Vocho Teotihuacano.”

As you may have noticed, the name of that artwork is in Spanish, not German. 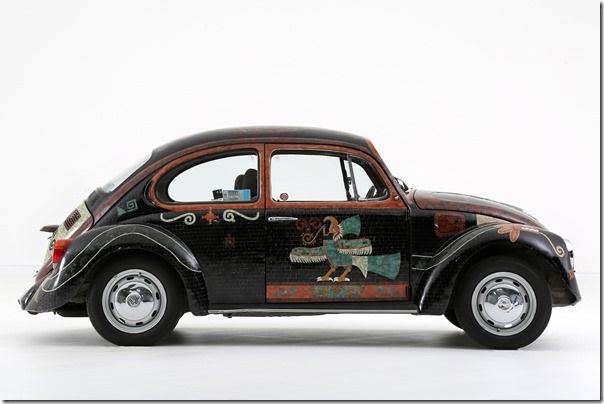 The sculpture was executed over a 33-month period by Héctor Garnelo Navarro and a team of five artisans. There are 19,800 semi-precious stones (e.g., obsidian, jade) that form images of pyramids, animals, ancient deities (Quetzalcóatl [Feathered Serpent, Creator God] and the Mictlantecuhtli [God of the Underworld]).

And the underlying structure is a 1994 Volkswagen Beetle.

You may be surprised to learn that there is a long association between Mexico and Volkswagen. The company started exporting disassembled cars to Mexico in 1954 (known as CKDs, for “completely-knocked-down”) then, in 1962, when the Mexican government required that car manufacturers have 60 percent local added-value, the company started efforts toward acquiring a Mexican company, Promexa S.A., which had been an assembler of CKDs. The acquisition occurred in 1964, and Volkswagen de México, S.A was established.

The company began building a manufacturing plant in central Mexico, in Puebla, which went into production in October 1967.

The first car to roll off the line: a Beetle.

Today the footprint in Puebla is 3,000,000 m². Volkswagen produces a number of vehicles at the plant, including the Jetta, Golf. . .and Beetle.

All of which uncoincidentally brings us to the 2016 VW Beetle Dune, heir to the Vocho Teotihuancano. 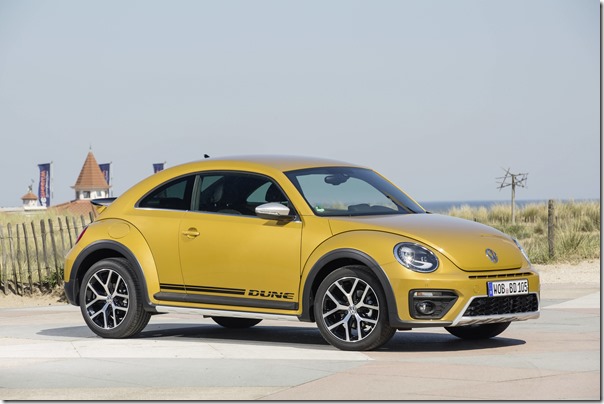 Now Volkswagen would tell you that the Dune is in the lineage of the Beetle-based dune buggies of the 1960s and 1970s. However, those often had no visible Beetleness to them, using the platform and the powertrain, with a completely different fiberglass body and different seats.

The production car—which was introduced, of course, at the 2015 LA Auto Show (let’s face it, that’s about as close to Surf City as you’re going to get)—is said to be more capable in appearance, thanks to an increase in ground clearance of 0.39 inches, flared fenders which make it 0.55 inches wider, and 18-inch wheels.

There is a large spoiler on the back. There is a 170-hp turbocharged four, so let’s not get too concerned with track holding aero (and one would assume that a dune buggy would never be on a track, so this is a strange touch vis-à-vis the theme.)

A specific color was developed for the Dune: Sandstorm Yellow, which is accentuated by black graphics. This paint not only adorns the exterior but the interior, as well. There are sport seats with contrasting stitching (“Curry”); there are a leather-wrapped steering wheel (and there is a “Dune” badge insert near the six-clock position of the steering wheel, reminding you of what you’re in, as though Sandstorm Yellow paint on the instrument panel and door trim won’t do it), parking brake lever grip, and gear shift grip. There is a non-trivially sized spoiler on the back. Now while it is true that Tanner Foust drove a Beetle to victory this past September in Seattle that secured for Volkswagen Andretti Rallycross the Red Bull Global Rally Cross Manufacturer’s Championship title and Foust’s car has a large spoiler on the back, one can only assume that his spoiler was somewhat more functional, useful and appropriate than the one on the back of the Dune, which is undoubtedly there for the aesthetic, should it be considered such. (Sure, it probably has some effect. But there is probably an inverse relationship between its appearance and its usefulness.) There is Apple CarPlay. Android Auto. And a Fender-branded (yes, as in the guitar) audio system. All good things.

One clever thing about the vehicle is that when you put it into reverse, the large, round VW logo on the rear hatch automatically pivots upward to expose the rear-view camera. (Of course, you can’t see this when you’re behind the wheel.) Credit must be given for the clarity of the image that is displayed on the screen from that camera. I’ve been in cars costing 3X the $23,995 starting MSRP of the Dune and they’re like seeing an image shot through Vaseline.

Purchasers of a Beetle are probably unlike others who buy four-passenger coupes. And there is a subset of them who buy the Dune. These are those who can’t wait for a Jan and Dean song to come up on the ‘60s on 6 with Cousin Brucie on SiriusXM.