The Acura TLX launched in 2014 as a 2015 model, the successor to the TL. The TL had been a venerable and possibly bad nameplate when the midsize car launched in 1995 as a ’96 model: possibly bad because it was one of the first vehicles in the brand’s lineup to give up nouns for letters. The model prior to it was the Vigor. Perhaps not the best name in the world, but still more distinctive than TL. And one might argue that “TLX” is somewhat confusing in that “RDX” and “MDX” are the two most popular vehicles in the Acura lineup, and they are not sedans, sports or otherwise, but crossovers. 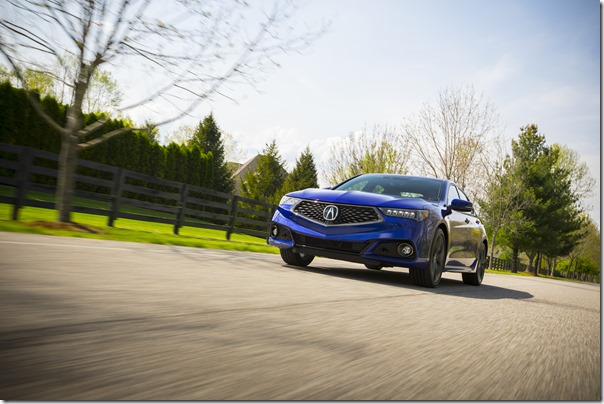 Be that as it may, the transition from the TL to the TLX didn’t, as one might imagine, result in a bigger car, but actually one that is smaller and tauter. And in terms of length and width, considerably different:

While the TLX is nominally a front-drive platform, Acura has in its technology arsenal an all-wheel drive system that it calls “Super Handling All-Wheel Drive,” a torque vector system that is particularly beneficial when doing what sports sedans are supposed to do, which is go through curves with seamless aplomb.

Acura has two engines on offer for the TLX, a 204-hp, 2.4-liter four and a 290-hp, 3.5-liter V6, the engine in question here, the engine used in the AWD A-Spec. The former has an eight-speed dual-clutch transmission and the latter a nine-speed automatic—yes, with paddle shifters (one thing to know is that whereas some vehicles offer the ability to use the gear shift lever for sport shifting, the TLX has a pushbutton gear selector, so that won’t do).

For the 2018 model, Acura execs, undoubtedly recognizing that sedans, sporty or otherwise, are having a tough go of it in the market, decided to do a refresh for the TLX, something that probably wouldn’t have happened for at least another year were it not for the onslaught of crossovers. (Not that Acura minds, mind you, given the aforementioned RDX and MDX.)

The freshest of the group is the A-Spec model, which is available on both the front-wheel and AWD version of the TLX. 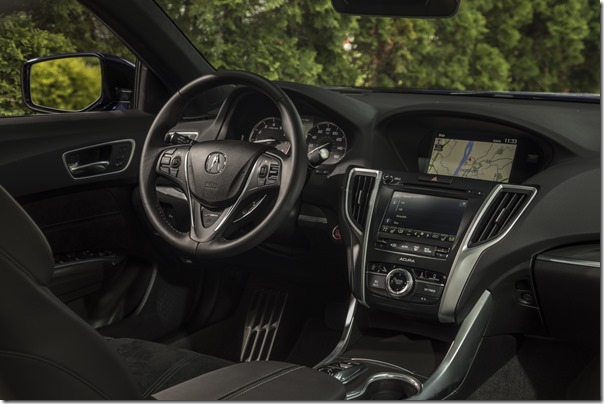 This is largely a trim package, as the fundamental bones and muscles of the car get it done. That is, the grille has a matt-black diamond pentagon design (it reminds me of a starship going into hyperdrive) surrounded by a dark chrome frame. The lower fascia is, well, lower, and has a large air opening in the center and round LED fog lights on either side. The LED headlamps are also surrounded by a smokier look, and the taillights bring on the smoke even more. In some regards the treatment of the rear fascia mirror the front, although instead of the opening there is a lower rear diffuser and there are dual exhaust finishers. The decklid gets a gloss-black spoiler. And the A-spec has distinctive 19-inch alloys, and the side sills are more pronounced than the conventional car’s.

The front seats are more bolstered than those found in non-A TLXes, and the steering wheel has a nice thick section. There is what’s known as “aluminum-look” trim.

The man-machine interface—as in the center stack, not the red-illuminated gauge cluster—makes use of two stacked screens, which allows one to tune the audio while not getting lost because there’s still evident navigation. And speaking of that—the navigation—it is really the Achilles heel of the car, because the images on the screen are about as well rendered as something you might see on a Commodore 64. And there is a multi-view rear camera with dynamic guidelines that is also rather sad. There are Apple CarPlay and Android Auto, so there is some salvation in this aspect of the car.

Acura has been on the scene since 1986. Compared to Lexus and Infiniti, it has never gained the sort of traction that one might imagine that the luxury brand of Honda would.

In some regards, this TLX A-Spec might be an example of one of the reasons why: In some regards it is exemplary, but in others it disappoints. When you’re talking about a car that comes in just below $45,000, that price is too dear for a disappointment. 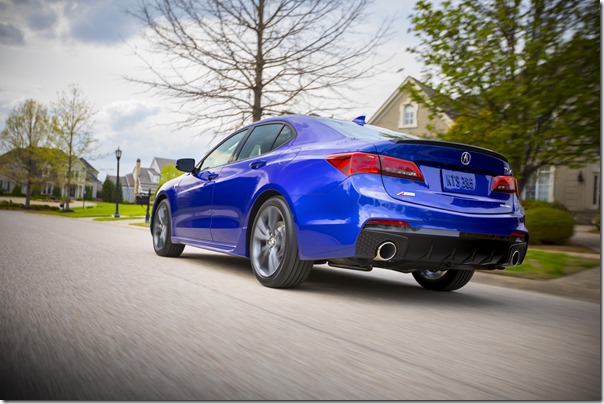