For those who grew up driving sedans, or for those who would like an experience that is unlike what’s provided by things with a high H-point, the Buick Regal GS is an intriguing proposition.
#Dodge #Brembo #Pontiac

I grew up riding in or driving Pontiacs. My dad transitioned from Chevys to Pontiacs and so that’s what I was familiar with for both my youth and teenaged years, when I took the wheel. And when I was married my dad sold us a Ventura for what I later realized was far, far less than the car was worth because that’s what good dads do for their kids who decide to make a career in journalism. This little nostalgic trip is being done simply because when I first walked up to the Buick Regal GS sitting in a parking lot—a bright red (“Sport Red”) sedan with front and rear fascias that have exaggerated forms, a decklid spoiler and even side skirts—my initial thought was, “This is a Pontiac!” When I got behind the wheel (with the obligatory flat bottom, signifying that this is a car that is to be pushed, not simply driven), hit the start button and heard the 310-hp, 3.6-liter V6 burble through the sport-tuned exhaust, I was further convinced that this was a Pontiac. When I noticed something in my peripheral vision near the top of the sport seats (which, by the way, are comfortable, not punishing when you’re simply driving to the store) and then realized that they are plastic insets that echoed the grille and serve no apparent purpose rather than to look sportier than someone must have thought the seats would were that feature to have been left out, I knew I was in a Pontiac. 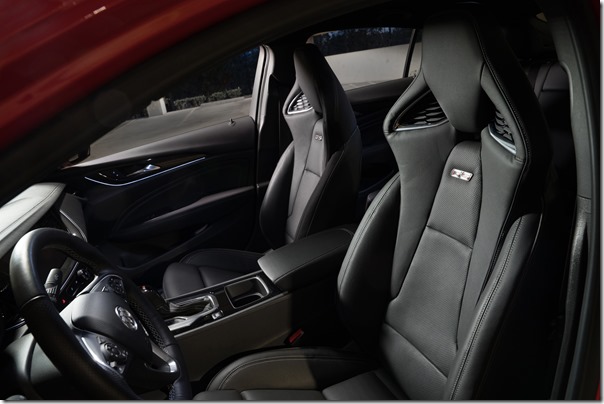 Again: Don’t get me wrong. I like Pontiacs. They were part of our family. My sister went on to own an Aztek for many years and still sometimes speak of it with a sense of loss in her voice. Although Pontiac is behind GM now but for many it still resonates.

Yes, I know that Buick has history with Gran Sports, with various executions of the Skylark in the ‘60s and ‘70s that were Pontiac-like in their excess.

But Buick has always seemed more button-downed to me, for the most part, so I still think this Regal GS is a Pontiac.

There is something that occurs to me, which is that nobody—or very few somebodies—want cars like the Regal GS so unless this is about playing to a niche, I don’t understand the point.

One could make the argument that the Dodge Charger is competitive with the Buick GS, but given that the Charger has been around for so very long that FCA is undoubtedly minting money with every Charger that rolls out of the Brampton plant. Last year FCA sold 88,351 Chargers in the U.S., which must be awfully appealing to the brass at Buick because the only vehicle that it sold nearly that number of in the U.S. in 2017 was the small Encore crossover, 88,035 units. In fact, the Charger outsold all of the cars in the Buick lineup in 2017 (Cascada, 5,595; LaCrosse, 20,161; Regal, 11,559; Verano, 4,277; for a total of 41,592). 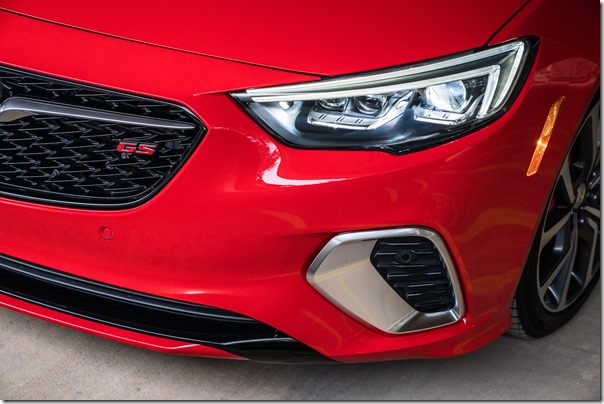 But while the Regal GS is performance-oriented, the likelihood that it might be cross-shopped with a muscle car is slight at most; it is certainly a more sophisticated product in approach and execution.

There is a nine-speed automatic transmission. There is intelligent all-wheel drive that has an active twin clutch setup so as to put the torque when and where it is needed. There’s “Interactive Drive Control,” which means that the driver can select settings to modify the performance of the vehicle as desired.

To maintain a smooth ride there is what’s called “Continuous Damping Control,” which adjusts the suspension settings faster than you can read this sentence: 500 times per second.

And as this is a performance-oriented car, it has Brembo brakes.

There aren’t many cars anymore that are like the Regal GS. Which probably has a lot to do with the evolution of not only tastes but of the overall industry, which is seemingly more interested in promoting vehicles that are sleek performance sedans but large crossovers and SUVs of various configurations. 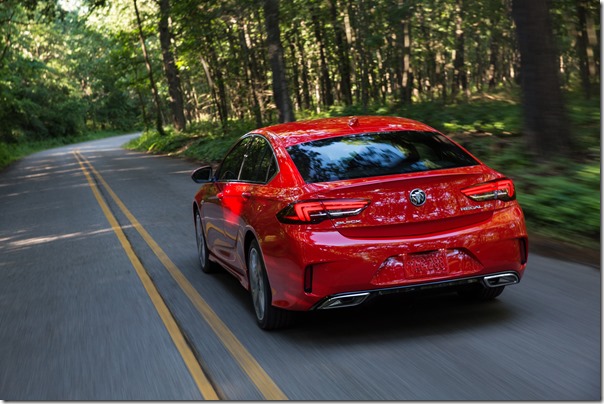 But for those who grew up driving sedans, or for those who would like an experience that is unlike what’s provided by things with a high H-point, the Buick Regal GS is an intriguing proposition.