No matter how you look at it, a minivan is a family vehicle.
#oem #Honda #HP

No matter how you look at it, a minivan is a family vehicle. Unless you’re an Uber driver or have an absolute obsession with antiquing, you don’t get a minivan unless you’re going to take advantage of certainly the second, and quite likely the third, row of the vehicle.

Often, of course, those people are family members. Especially kids. 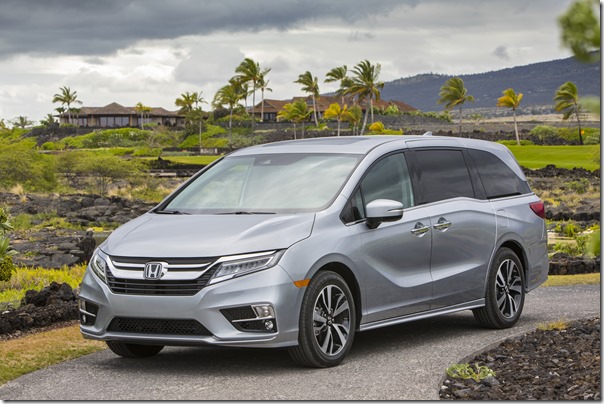 So the concern that moms and dads have when selecting a vehicle like a minivan is not just the soft-touch material that may adorn the instrument panel (and in the context here, that box is checked), but just how confident they can feel that this is a safe means of transportation. The engineers who developed the Odyssey—women and men who work at Honda R&D Americas, so they’re pretty much like you and me--know that, so when the Honda Sensing package (which includes adaptive cruise control, collision mitigating braking, forward collision warning, lane departure warming, lane keeping assist, and road departure mitigation) and LED headlights are optioned, the vehicle gets a TOP SAFETY PICK+ rating from the Insurance Institute for Highway Safety (IIHS). It also scores a 5-Star Overall Vehicle Score from the National Highway Traffic Safety Administration (NHTSA).

Contributing to that is the extensive use of things like ultra-high-strength steel (8 percent) and advanced high-strength steel (37 percent). Some of the steel—used to create the door ring, which is particularly key in instances like side impacts—is so strong that in order to stamp it it has to be heated up so that it is sufficiently pliable (but then when it cools it is really, really strong—they even have to use a laser to weld the stuff). 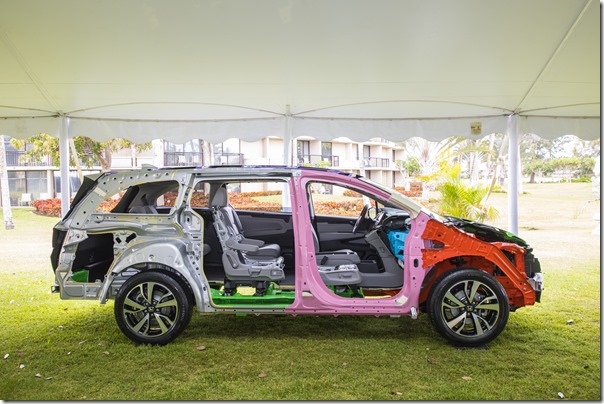 The colors indicate different materials, like the really strong door ring (in pink)

But let’s be honest. Someone who is in their local dealer looking at minivans are probably not going to quiz the salesperson about the amount of structural adhesives used.

Rather, it is probably more along the lines of the seating, especially the seating for the third row. (After all, in the case of the Odyssey, it is based on Honda’s light-truck platform, so were someone not to want three rows of fully useful and comfortable seats, they might opt for something like the Honda Pilot, which is based on the same underpinnings.)

The Odyssey has what they call the “Magic Slide” second row seats, which means that when there is no middle seat in the second row the seats can be slid toward the center of the vehicle to make it easier to get in and out of the back, and it is even possible to get to the rear should there be two rear-facing child seats in the second row (i.e., they don’t need to be removed for the ingress and egress). 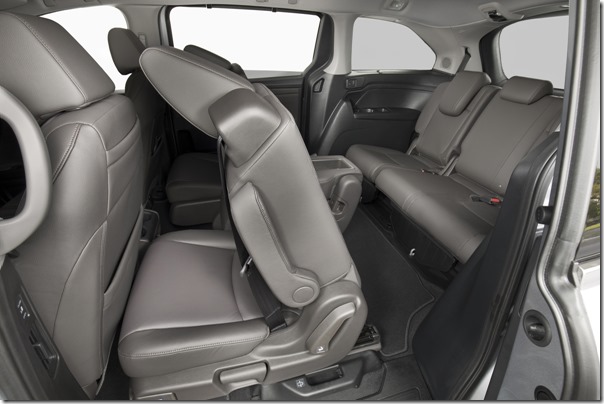 Getting in the back made easier

And speaking of the positions behind the front row, including those child seats, this is something that is certainly going to be important to parents: CabinWatch. This makes use of a ceiling-mounted camera so that the second and third rows can be seen on the 8-inch touchscreen mounted in the instrument panel. The touchscreen has a smartphone-like capability that allows the image to be stretched bigger or pinched smaller. And the camera has infrared capabilities which mean that even at night what’s going on back there can be readily discerned. Complimenting CabinWatch is CabinTalk. Which allows communication to those in the back rows via headphones that are part of the rear entertainment system or, in the Elite trim, through second- and third-row speakers. 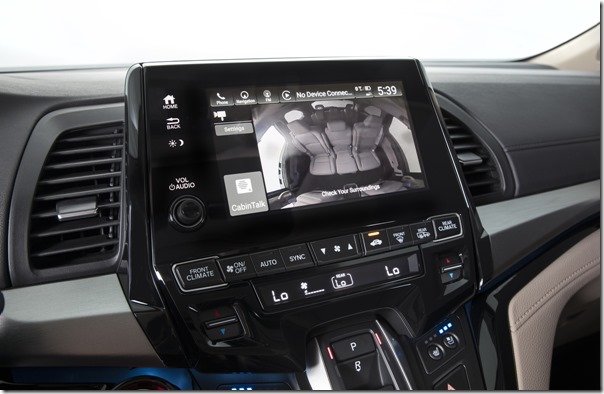 See what’s going on back there

And while on the subject of the entertainment system, there is CabinControl. After an app is downloaded to one’s smartphone, that person has the ability to control not only the rear entertainment system but the HVAC in the rear, too. In addition to which, destinations can be sent to the navigation system. (Fear not: the driver maintains ultimate control of these things.)

Another place where all of that aforementioned steel comes into play is related to the performance of the Odyssey. The steels are strong but light. Which means that there is minimal mass that must be moved by the 280-hp 3.5-liter V6 engine that is mated to either a 9- or 10-speed automatic transmission. (Not that it is as big a deal as it was a few years ago, but the engine features Honda’s Variable Cylinder Management, which means that based on driving conditions the engine will run on three cylinders rather than six, which means fuel savings. Even if gas is cheap, it isn’t free, and the last time I checked, the prices at most fast food emporiums aren’t going down.)

As for the styling of this fifth-generation Odyssey: it is evident that this is a vehicle with a whole lot more styling and presence than its predecessors. But let’s face it: at the end of the day it is a minivan and no matter how attractive it may look, it is still a minivan, so what matters most are safety and functionality, which the Odyssey brings, with the styling being a nice bonus.

Still, chances are the CabinTalk is what will really move someone to sign on the dotted line.