The thing about the Jaguar E-PACE is that although this compact sport utility vehicle is said to have been inspired by the F-TYPE, which is a stunningly styled sports car, it seems that the E-PACE, blather about shared DNA notwithstanding, doesn’t have the punch nor the panache that the F-TYPE does, which may say more about the styling limits of the SUV form than it does the E-PACE in particular. That is, yes, there are haunches surrounding the wheels, but this is somewhat de rigueur for those who are designing vehicles and want to denote that there is performance (actual or faux) involved. Yes, the windshield leans back like a proper object that cuts through the wind like a good sporting vehicle would, but again something that is as much part of vehicles that you wouldn’t deign to say in the same breath as “Jaguar.” The side windows have a tear-drop taper, which is a bit unusual, and the backlight, which is located under a spoiler that extends from the rear of the roof, is, like the windshield, angled, and has a shape that seems somewhat ovoid when looked at with the rearview mirror: both the side glass and that backlight may be thought of in the context of sporty vehicles because they both tend to not be particularly ergonomic, which is a characteristic that one might associate with a type of vehicle that has “utility” in its name. And while on the subject of visibility, it should be mentioned that the A-pillars seem rather, well, substantial, which doesn’t exactly help. In addition to which, the E-PACE is available with a head-up display (HUD) that is a new generation for Jaguar; it has four LEDs and a high-resolution TFT LCD screen, so the alphanumerics are bright and clean, but there is something of a problem, I think: in order to accommodate the HUD there is a lump on the top of the instrument panel, right in front of the driver, which attenuates the view forward a bit, making the front end of the vehicle, which slopes downward, more difficult to locate in space. 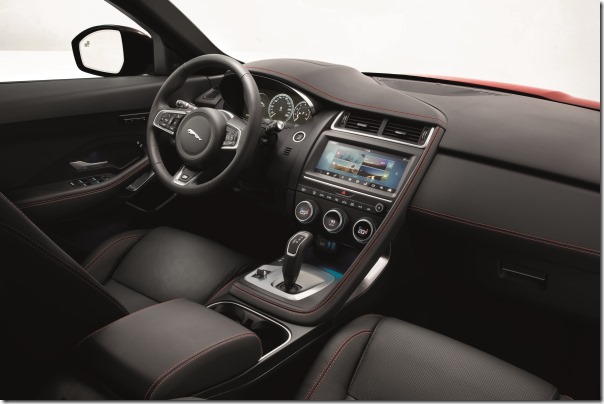 The E-PACE is pleasant to drive. It has a 2.0-liter turbocharged four that produces 246 hp and 269 lb-ft of torque; the twin-scroll turbo has little in the way of discernable turbo lag. The engine is mated to a ZF nine-speed automatic. It has permanent all-wheel drive that can send “almost all” of the torque to the front or rear axle should the other one lose traction; there is a torque vectoring system that use the brakes to balance engine torque as required.

Inside the E-PACE there is a nice execution, particularly in this First Edition raiment. If you like leather: sueded, smooth and/or soft, it’s there. The vehicle offers the latest generation of the “Jaguar InControl Touch Pro” infotainment system, including a 10-inch touchscreen display. A word about that. Do you know anyone who has ever bought a British computer? (Grundy NewBrain, anyone?) For the 2019 model year Jaguar will reportedly be offering Apple CarPlay and Android Auto. That’s a bit overdue.

The slight regarding electronics aside, it must be said that the Jaguar engineering boffins are absolutely on their marks. The hood, front fenders, roof, and tailgate are made of aluminum, which has the effect of lowering the weight of the vehicle, and in the context of the roof, lowering the center of gravity. The body sides are produced with a high formability, thin gauge (0.03-inch steel). The cross car beam that’s located within the instrument panel is a lightweight magnesium casting. There is extensive use of aluminum in the suspension, even including a hollow-cast aluminum front knuckle.

The vehicle is produced by Magna in its Magna Steyr facility in Graz, Austria, an operation that knows more than a little something about producing specialty vehicles.

And in its own way, the E-PACE is a special vehicle. 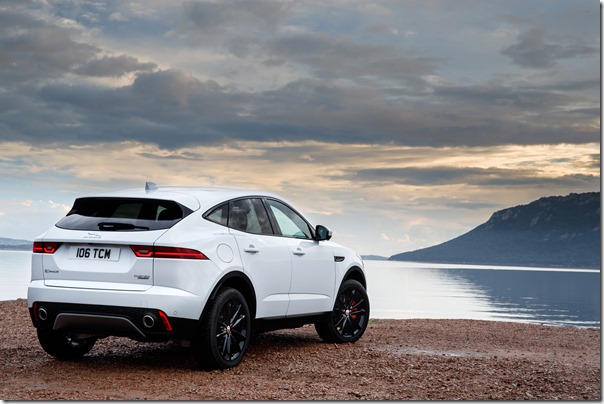