The Wrangler is a machine. An exceedingly well-executed machine. Every element, from the exterior door hinges to the knurled surface on the gear shifter lever, is designed and built for purpose. And the purpose is transportation.
#oem #HP #Chrysler

I sometimes like to read about high-end audio equipment. The amps. The power suppliers. The tuners. Even the cables. (Some cables—no exaggeration—cost what an entry-level car does.) 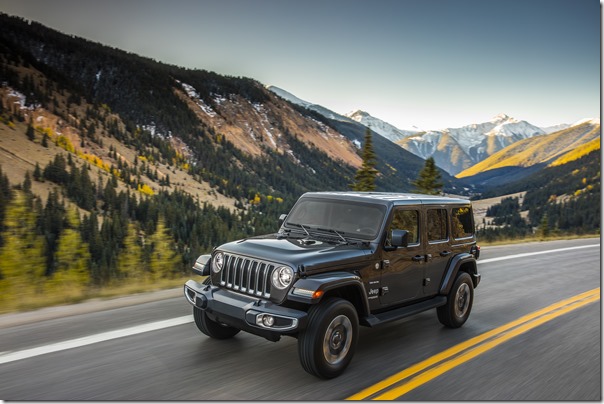 Mind you, I am far from being an audiophile. But that area is one where there is absolute delight in the engineering of equipment, equipment that often looks as though it isn’t a matter of form following function, but of function being the first and foremost consideration. It isn’t an issue of putting things in packages that will either be appealing or not off-putting. It is a one of doing what needs to be done.

All of which may make you wonder what this has to do with the 2018 Jeep Wrangler.

It’s like this. Just as many people only know audio through a pair of earbuds connected to a slick, smooth iPod, those who are looking for the authentic, the real, go for components that are built for purpose.

It strikes me that the Wrangler is a machine. An exceedingly well executed machine. Every element, from the exterior door hinges to the knurled surface on the gear shifter lever, is designed and built for purpose. And the purpose is transportation.

They aren’t fooling around with the engineering. Which means that the drivers can fool around in conditions that would break things that just look like a Jeep. Yes, you can remove body panels because, well, it is a Jeep

Make no mistake. The 2018 Wrangler is as contemporary as any vehicle out there. With the Sahara trim there are leather seats. With options there is everything from a Uconnect 4C navigation system with an 8.4-inch display to an Alpine premium audio system.

Yes, this vehicle can be driven on the highways and byways without one physically feeling as though they are in some sort of 19th-century buckboard wagon. You won’t mistake the ride for that of, say, a Chrysler 300, but you won’t think that this is some sort of penalty you’re going to be dealing with at least until you’ve paid off the loan. Not at all.

Yet it is also built to be able to maneuver on and through areas that only that true band of Jeep owners are inclined to take on—areas that the rest of us wouldn’t even perceive to be possible. (That is, the vehicle as driven had a Selec-Trac full-time AWD system, third-generation Dana 44 HD rear axle and other elements that provide the “go-anywhere, do-anything” functionality that is quintessential Jeep—and I will confess to putting it through no more rigorous workout than driving it on the streets of metro Detroit, which are admittedly in some places less than ideal, but are in no places Moab-like challenging.)

The version driven has a 2.0-liter turbocharged inline four that produces 270 hp but, more relevant to Jeep drivers, 295 lb-ft of torque at 3,000 rpm. It has eTorque technology, which is essentially start-stop functionality. There is an eight-speed automatic. (The base engine is a 3.6-liter V6 that produces 285 hp; it reaches 260 lb-ft of torque @ 4,800 rpm. It is mated to a six-speed manual, standard.)

This is a serious vehicle for serious drivers who sometimes drive under serious conditions.

Yet for all of that seriousness, it is impossible not to just look at it—the metal gas filler door that is more like cast iron than plastic, the inserts on the top of the hood to accommodate the windshield when it is folded down (seriously, you can do that as well as take all of the doors off because sometimes you just want to. . .well, there must be a reason), the grab handles on the inside—and just smile. 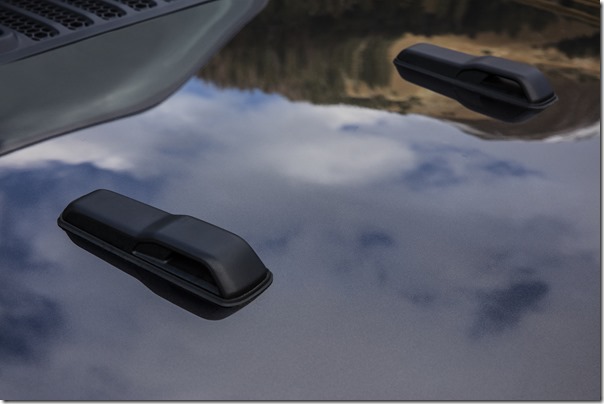 Fold down the windshield onto these on the hood

Because this is real. Authentic. Capable.