The Kia Stinger was a finalist for the 2018 North American International Car of the Year Awards. One of three. No, it didn’t win. The Honda Accord did. The Stinger took the silver. But there are a couple of things to keep in mind. One is that the distance between first and second was within unaided visibility while the distance between second and third (the Camry) requires binoculars. Two is that these were among the cars that the Stinger (and, of course, the Accord and Camry) bested to get to the finals: 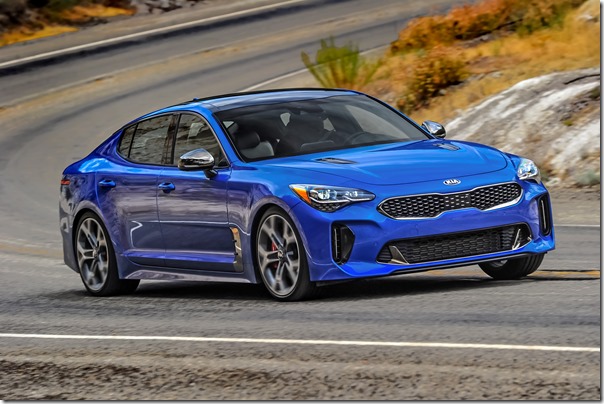 Think about this for a moment. The Accord and Camry are fundamentally “family cars.” That is not meant to be a knock in any way. Four door sedans are basically cars that aren’t bought by people who want exhilarating performance. A touch of performance, in some cases, of course (just because one is married and has kids doesn’t mean that it is only about orthopedic, long-lasting shoes), but by and large (which goes a long way to explain the 387,081 Camrys and 322,655 Accords sold in 2017—and know that if there was an auto company that built just those two cars, the combine 709,736 is greater than the number of vehicles sold by Hyundai, Volkswagen, Volvo, Mazda, Subaru, or Kia) that’s not the case.

Which brings us to the Stinger, which is meant to be something that’s driven with more than a modicum of zest. 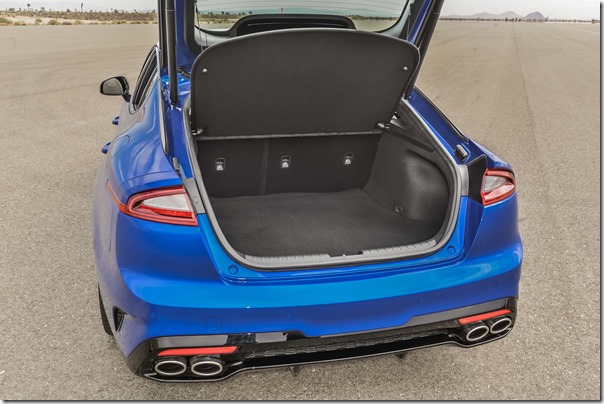 But that’s not the point of this car.

They didn’t name it Stinger because this is a car that is meant to be sensible.

Horses, as they say, for courses.

Again, the Accord and Camry are superlative cars.

But the Stinger is something entirely different, four doors and four tires notwithstanding.

Yes, the Stinger can be your proverbial daily driver. It has comfort. It has amenities. It has that cavernous capacity to handle stuff through the hatch.

But it is available—across the board, all trim levels—with optional all-wheel drive (the vehicle, being a performance car designed and engineered from the ground up to be a performance car, is rear-drive), which means not only a little more vis-à-vis performance (there is a Dynamic Torque Vectoring Control system that sends power to the wheels where needed) when doing some, ah, “spirited” driving, but also makes the Stinger something you can drive in inclement weather without having a series of moment when you might shout out some words you don’t want the other people in the car to hear (especially kids). 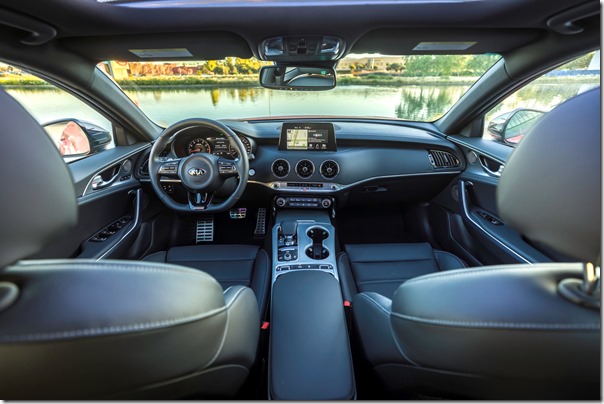 The car was conceived—in Europe—to be a gran turismo, a car meant to be driven, with passengers along for the ride should it be desired (or required), with confidence and comfort and capability.

Gregory Guillaume, chief designer at Kia Motors Europe, said, “A true gran turismo, a car for spirited long-distance driving, is not about outright power, hard-edged dynamics and brutal styling, all at the expense of luxury, comfort and grace. The Stinger has nothing to do with being the first to arrive at the destination – this car is all about the journey. It’s about passion.”

So let’s break that down. While it may not be about outright power, in addition to the 255-hp base engine, there is a 3.3-liter twin turbo V6 that generates 365 hp and 376 lb-ft of torque. That’s power.

The styling is not hard-edged, but it has a striking presence that some may describe as being edgy.

And while it may not have anything to do with arriving first at the destination, but that doesn’t mean that you won’t.

One of the things that was most remarkable to me about the Stinger—and yes, I was in the high-performance version of the car—is how easy the car is to drive. That is, all of the capability of the car notwithstanding, it is a vehicle that doesn’t let that capability get in the way. When you want to drive it to the grocery store, you can simply drive it in comfort. When you want to get on the aluminum gas pedal and swing the car through the corners, you can do so with confidence.

There are some cars with performance that you drive all the time knowing that it is skittish if you’re not driving it hard. Which is nice if you live along the Mulholland Highway but otherwise is not a particularly enjoyable thing to have when you’re running the kids to school in a flat, geometric neighborhood.

But the Stinger is not just about what’s under the hood. There was considerable attention paid to the interior of the car, with leather seats on all trim levels (with the GT2 getting Nappa leather), and the use of metal not only for the pedals, but trim. There are illuminated mirror for the visors, and an illuminated glovebox. The seats are heated across the lineup (and ventilated for the GT2). There is a color touch screen in the center stacks. There is first-rate audio capability and the now-obligatory Apple CarPlay and Android Auto. And there is a list of other features that are standard in addition to these, with the point being that this is simply a well-equipped, comfortable car that happens to be capable to credibly run at the Nurburgring.

Yes, the Kia Stinger is in some ways a family car. But for a family that likes to go fast, In style. 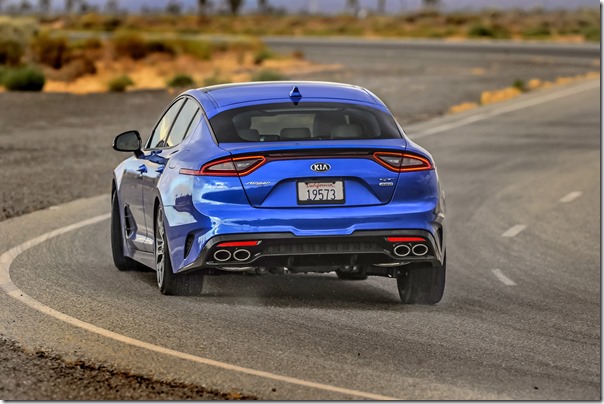