While you are probably familiar with origami, the classic art of paper folding that results in things like birds that flap their wings when you pull the tail, or plot devices in one of the Blade Runner films.

But what you probably don’t know is that there is something called “origami sekkei,” which is actually a technical approach to the folding. In fact, there are even algorithms written for this approach to folding (e.g., https://courses.csail.mit.edu/6.885/fall04/erik_notes/anydpi/L18_paper.pdf ).

Whether or not the design team at Lexus is cognizant of origami sekkei, whether there is someone on staff who has a predilection to take pieces of paper and fold and crease it with a finesse surpassing what most of us can do (which probably doesn’t extend too far beyond a paper airplane that doesn’t travel particularly far), it seems fairly evident that the NX 300h is an exquisite example of metal that’s been folded with all of the mastery of an artisan in Japan taking on a piece of Washi (apparently the traditional paper used in Japan for the art of folding: the NX is produced at a plant in Miyawaska, Fukuoka, so presumably there’s more that a few sheets of Washi on the premises).

The NX 300h is a compact hybrid crossover. As it is smaller than the RX 350 (and certainly more diminutive than the GX and LX), there is the opportunity for there to be a concentration of the edgy design language that has the laudable characteristic of being polarizing: Some like it, some don’t, but there is no one who doesn’t have an opinion. Arguably too many crossovers in this category are nearly indistinguishable. That’s not at all an issue with the NX 300h. 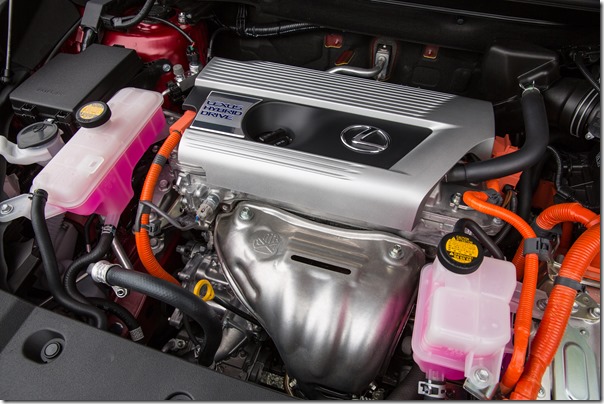 There is a 2.5-liter, Atkinson cycle in-line four that produces 154 hp. But as this is a hybrid, it has the classic Toyota (yes, this is a Lexus, but we know where the hybrid technology comes from) motor generators that do a variety of functions from starting the engine to accumulating energy during braking to driving the wheels (and as this is an AWD vehicle, there is a third motor generator, this one to drive the rear wheels, as well as perform regeneration.) All in there is 194 hp.

But chances are no one is going to be buying the NX 300h for its spirited driving performance. There is the NX 300 for that, as it has a turbocharged 2.0-liter engine that produces 235 hp.

What one would be more likely to do is to get the NX 300h for the fuel efficiency that it offers, which is an EPA-estimated 33 mpg city, 30 mpg highway, for 31 mpg combined. 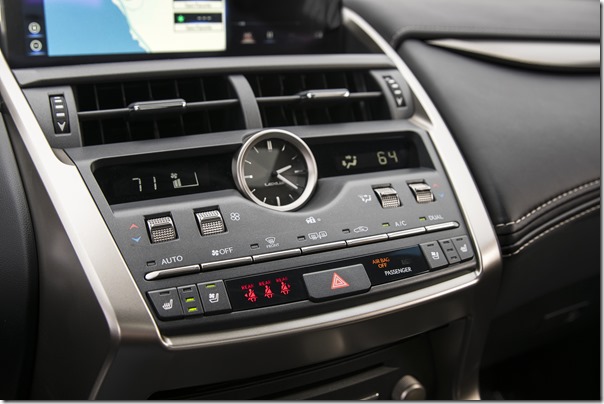 (A digression for a moment. The NX 300h has an MSRP of $38,335. The vehicle that I drove was optioned up such that the wood and leather were laid on with comparative abundance, and it offered a nice audio system and more. Which is to say that the price as driven—before the $995 delivery fee—came to $45,515. Now you might think that someone who is spending that kind of money probably isn’t all that concerned with getting the good miles per gallon that the NX 300h offers. Which may be the case. But consider this: the vehicle has a 14.8-gallon fuel tank. So if we use that 31 mpg combined number, that means someone can drive about 450 miles before they need to visit the gas station. And unless you’re heavily into vaping or Slim Jims, chances are the fewer stops the better.)

One of the things that is a little surprising is that the buttons and switches and such are somewhat diminutive, particularly for a “utility,” albeit one that is a crossover. It is almost as though there is the presumption of dexterity on behalf of the driver. Perhaps something born of origami sekkei.