When the 2014 Mazda6 was launched, the company proclaimed, “Design ingenuity is mysteriously absent among non-luxury mid-size sedans. As if afraid to offend, most segment offerings reflect a straight-and-narrow approach, seemingly forgetting how fun the twists and turns can be.” Which was even something of a dubious claim five years ago (after all, there were cars like the 2011 Hyundai Sonata, which had more twists and turns that the sheet metal of the 2014 Mazda6 and the 2013 Ford Fusion, which features a look that brought a certain British marque to mind, something that was unthought of prior to that redesign (and that earlier model shared a platform with the Mazda6).

Anyway, while the segment has seen an array of midsize cars roll out that have distinctive presence—think only of the way that there have been changes to the Kia Optima, Chevy Malibu, Toyota Camry, Honda Accord—the 2018 Mazda6, while still a handsome car, is no longer something that is distinctly characterized with its “design ingenuity.” 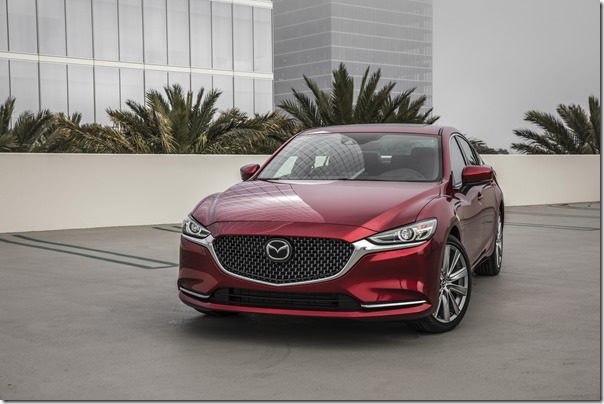 Arguably, it is a car for which the exterior modifications like a new grille and standard LED headlamps aren’t necessarily enough to set it apart any longer (if you think that it was something of an outlier as of 2014).

Don’t get me wrong: I really like the design of the Mazda6 but it seems that even in a segment where there is declining sales, those companies that are still getting traction—as in Toyota and Honda—have upped the ante in such a way that bits of chrome trim added just doesn’t matter that much.

One of the things that surprised me the most about the Mazda6 is that it has a 2.5-liter turbo four that produces 227 hp, 310 lb-ft of torque, and yet its lightweight SKYACTIV technology in the body, and SKYACTIV engine notwithstanding, there was (1) no real sense of spirited performance (and I don’t mean something that knocked me back in my seat when I hit the accelerator, just something that had more than expected get-up-and-go) and (2) its fuel efficiency was mediocre (i.e., in more than 300 miles of freeway driving at or about a steady 74 mph, the vehicle returned 30.5 mpg, which strikes me as not very much.) 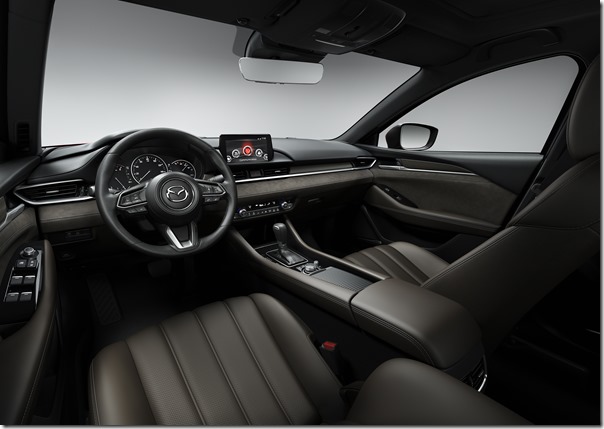 If we look at it window sticker to window sticker, the car in question shows 23 city, 31 highway and 26 mpg combined. The sticker on a 2018 Accord with a 2.0-liter turbocharged four that produces 252 hp and 273 lb-ft of torque shows 23/34/27 mpg. Perhaps not a big deal in the era of still-cheap-but-rising-like-a-frog-being-boiled gas, but again, you’ve got to have something distinctive in this segment.

The car features the increasingly obligatory safety and assistance systems, like smart brake support (you’ll be notified if there is something you’re closing on and you aren’t on the brake pedal) and lane-keep assist (which really makes you aware of the fact that you’re drifting). There’s adaptive cruise control that works well, though when on a freeway and the speed dips to say, 50 mph, there is a steady increase in speed 55. . .60. . .65 . . 70 that is almost imperceptible whereas some systems get on the throttle like they’re channeling Don Garlits.

The interior of the Mazda6 is nicely executed, though as this is the “Signature” edition, one would expect something a bit more special. Still, when there’s leather where you sit and where you grip, that’s always a nice thing, and there is something called “Sen wood,” which I admit to be unfamiliar with. Yes, it is real wood, not plood (plastic wood). Checking into what Sen is, I learned the material is used by craftsmen in Japan. According to Simona Merker, color, material and finish designer at Mazda North American Operations, “The look and the feel is different—more organic instead of the highly varnished application most people are used to seeing. Much like the renowned furniture, architecture and instruments that employ Sen wood, the ambiance this material brings to the new Mazda6 is exemplary of the simple, yet striking elegance of Japanese design.” 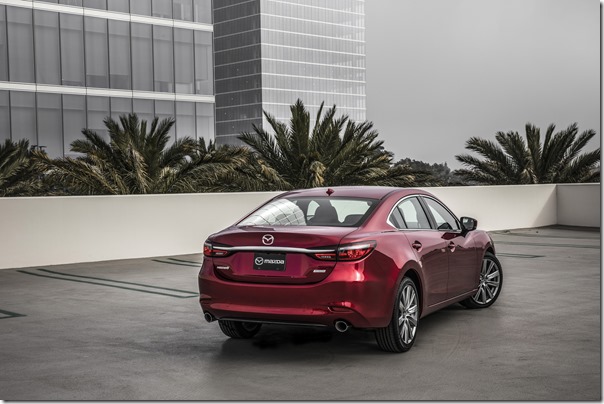 And also in the interior is one of the best features of something that you’ll use more than anything else: the seats. They’ve been redesigned and use a high-density, vibration absorbing urethane foam, which is transparently comfortable: it isn’t the sort of thing that calls attention to itself (some cars come with seats with side bolstering that do nothing if not remind you that you’re too wide in the hips) but that makes a long drive all the more comfortable.

And that’s certainly a distinctive feature.