The thing about the 2018 Mitsubishi Outlander Plug-in Hybrid Electric Vehicle (PHEV) is that it comes with a certain pedigree that most people are probably unaware of. First of all realize that when it comes to electric vehicles, Mitsubishi launched its i-MiEV in Japan in 2009 and started selling this battery-electric vehicle in the U.S. in late 2011. Admittedly, it hasn’t gotten the sort of attention that things like the Bolt EV and the Model 3 do, but the point is that Mitsubishi engineers know more than a little something about putting a production EV on the road, which is certainly beneficial for a plug-in hybrid. Then there is the fact that the Outlander PHEV has the company’s proprietary S-AWC, or Super All-Wheel Control, which was honed on the Lancer Evolution, better known simply as the “Evo,” that enthusiasts’ vehicle that was designed and engineered to generate the torque and traction to leave the competitors behind. Now the Evo didn’t have a pair of electric motors supplementing the internal combustion engine (one motor on the front axle and one on the rear), but the functionality is the same in principle. Finally there is the fact that this is a utility vehicle—yes, a crossover utility, but a utility nonetheless—and Mitsubishi has more than passing understanding of engineering utes that have considerable capability: it won the Dakar Rally seven times. 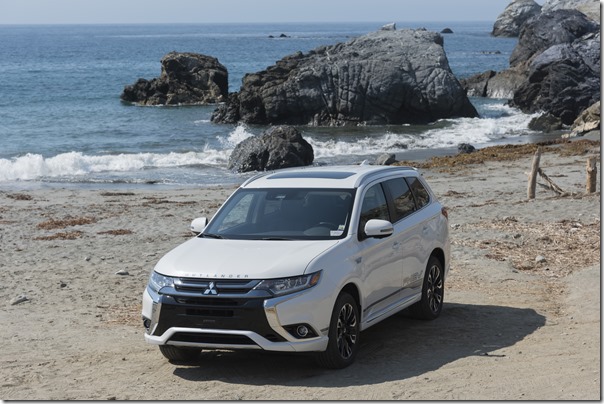 So this is a vehicle that has a rock-solid foundation.

For those of you who are unfamiliar with a PHEV—because let’s face it there aren’t a whole lot of PHEVs out there, and this Outlander is the only crossover with this system—know that the vehicle runs on both gasoline—there is a 117-hp 2.0-liter engine—and electricity. There are those aforementioned 60-kW motors. The motors are powered by a 12-kWh lithium-ion battery pack. The battery is charged by regenerative braking, as well as through the engine when operating in what is known as a “series hybrid mode.”

The important thing to know is that there is (1) a gas filler nozzle and (2) a plug. The Outlander PHEV offers a 120V/240V charging system, and has DC Fast Charging capability. Fundamentally this means that if you plug it into a typical wall outlet, you’re going to get a full charge in about 8 hours, or if you plug it into a commercial fast-charging charger, you’re going to get 80 percent of charge in about 25 minutes.

But so far as the engine and the motors and the battery and the gasoline are concerned, the system is doing the primary switching and charging and whatnot. You can get 22 miles of range with the lithium-ion battery pack providing the juice. Using both the engine and the motors the combined fuel economy is 74 MPGe (with the “e” standing for “equivalent,” because there is the addition of the electricity to the gasoline power).

But the real thing about the Outlander PHEV is that it is a plug-in hybrid crossover, and for a certain segment of the population, that’s what absolutely matters because (1) they want the crossover body style and not a sedan and (2) it is the only vehicle that offers the powertrain setup. So it just may check two boxes.