Think, for a moment, about the nomenclature of Nissan products.

There are the Altima, Maxima, Sentra, and Versa, all names that sound as though they were created by one of those branding companies that do work for pharmaceutical companies: the words sound like they mean something, but they really don’t.

There is the Armada SUV, which is in keeping with something like the Spanish Armada, which you may vaguely remember from a high school history class was rather massive, as the Armada is. And speaking of things that have a huge scale, there is the Titan pickup truck that is so big that Nissan actually uses all caps for the name (i.e., TITAN).

There is the environmental Leaf (which is also officially in all caps for some unknown reason).

The midsize pickup is named “Frontier,” which is a good name for a truck, as it evokes where one would ideally go with a pickup, which is the same for the Pathfinder CUV. The other CUV is named “Rogue,” which probably is meant to describe attitude more than the member of the X-Men. The Murano might bring to mind—at least to the well-traveled—the Venetian island where wonderful glass objects are created, and the crossover has always had more intensive styling than other vehicles with which it competes.

There is the GT-R, which combines two acronyms associated with racing. And, of course, there is the Z, the end-all and be-all of the lineup. 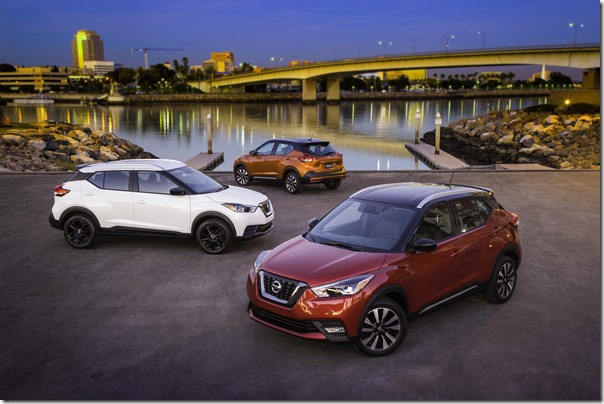 And now there is the Nissan Kicks.

Maybe you don’t think about the name of vehicles much, but think about it: Someone says “I drive a Maxima,” and even if you don’t know that the Maxima is the top-of-the-line sedan in the company’s lineup, the name itself implies it.

And if someone else says, “I drive a Kicks,” you probably think that the Kicks must be some sort of fun vehicle because let’s face it, there is more than a modicum of whimsy to that name.

The Kicks is a compact crossover that has a base MSRP of $17,990, which is just about half of the average transaction price for light vehicles in the U.S., according to Kelley Blue Book, so obviously the Kicks is targeted a younger demographic that wants to have a new car but doesn’t want to go too much deeper in debt than they probably already are (e.g., college loans). Nissan describes the Kicks as having a “tech-hungry target audience,” and anyone who has seen those TV commercials for Consumer Cellular can readily discern that the AARP crowd probably wasn’t on the minds of Nissan product planners for the Kicks. 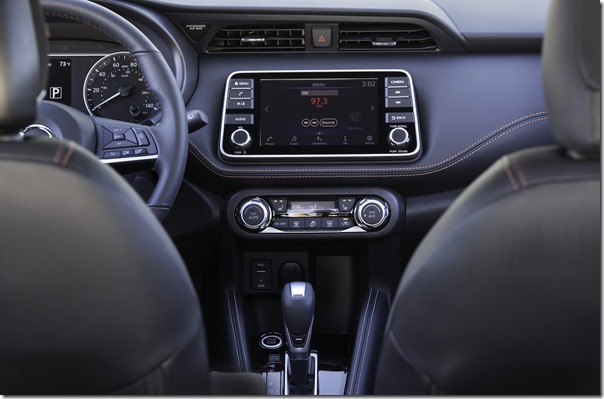 Kicks offers Apple CarPlay, Android Auto or Nissan’s own NissanConnect, displayed on a 7-inch display in the center of the instrument panel. Other available tech includes a system, called the “Intelligent Around View Monitor,” which uses four cameras to provide an overhead view of the vehicle when the Kicks is in reverse. There are three trim levels for the Kicks (S, SV and SR) and the two higher trims come standard with blind spot warning and cross traffic alert tech.

The Kicks is powered by a 1.6-liter four that produces 125 hp. It is mated to a continuously variable transmission (named “Xtronic,” presumably for reasons of sounding futuristic). For getting around town the combo is suitable. When it comes to freeway driving, the getting to speed is something that gives one pause (“Is something going to break as I continue to accelerate?”). Amusingly enough, there is a flat-bottomed steering wheel, the sort of thing that one would expect in a sporty car. This isn’t that car.

Of course, it isn’t described as a hatchback but a crossover. Which is mainly predicated, I think, on the fact that there is 7 inches of ground clearance, which is half an inch higher than, say, the Sentra. But the Kicks is considerably (comparatively speaking) higher than the Sentra, 62.4 inches compared with 58.9 inches.

A key kicky characteristic of the Nissan Kicks is the available two-tone paint scheme, the names of which are fairly wonderful in and of themselves: Aspen White/Super Black; Gun Metallic/Monarch Orange; Monarch Orange/Super Black; Cayenne Red/Super Black; Deep Blue Pearl/Fresh Powder.

An old slogan has it that “Trix are for kids.”

Do the rhyme with the car in place of the cereal. 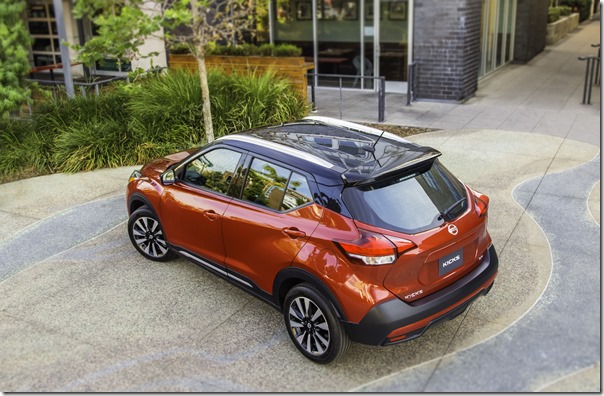