As you may recall from a class that you once took once upon a time, argumentum ad populum is the fallacy that has it that because a lot of people have done or think something, it must be right or good.
#Toyota #HP #Chevrolet

As you may recall from a class that you once took once upon a time, argumentum ad populum is the fallacy that has it that because a lot of people have done or think something, it must be right or good.

This is something that I sometimes think about when it comes to claims about vehicles: Everyone is buying one, so it must be a really good product. A counter to that is simply the McDonald’s hamburger. There have been billions of them sold, and while they’re not bad, would you really say they’re “good.” “Fit for purpose” would probably be a better term for the burger. Which is a way of backing into the 2018 Nissan Rouge SL. Last year Nissan sold 403,465 Rogues. That is a big number. A very big number. One way of understanding the magnitude is to know that there is nothing that the company has in its lineup that comes close. In terms of the second-best selling truck (the category the Rogue goes into for purposes of indicating sales numbers, although this is a unibody structure, not truck-like body-on-frame) is the Pathfinder at 81,065. The second-best selling vehicle in the entire Nissan lineup is the Altima, of which 254,996 were sold.

In the automotive space today, the compact crossover segment, in which the Rogue exists, is probably the most competitive. There are products like the Toyota RAV4, the Honda CR-V, Ford Escape, and Chevrolet Equinox, just to name a handful of what’s a bucketful.

Certainly pricing—as in what it is going to take to get one in one’s driveway—plays an important role in the decision that people make. But there are also styling, performance and amenities that come into play. The Rogue was substantially enhanced for model year 2017 with things like the “V-Motion” front fascia approach that Nissan has been taking for all of its products of late. The large chrome shape that presumably is supposed to be a “V” really appears like a “U” with a flat bottom and its arms splayed out. This shape is echoed in the DRLs that are located between the headlamps proper and the grille. The D-pillar also has angular forms, both where it meets the side glass as well as the blackout trim on either side of the backlight. The exterior styling is considerably different than other vehicles in the category, as they seem to be less, in effect, edgy.

The area of styling that I find to be exemplary is the interior. Nissan once seemed to have been on some sort of “let’s see how much we can thrift our bread-and-butter vehicles by providing interiors that are better for our bottom line than for the driver’s and passengers’ bottoms.” 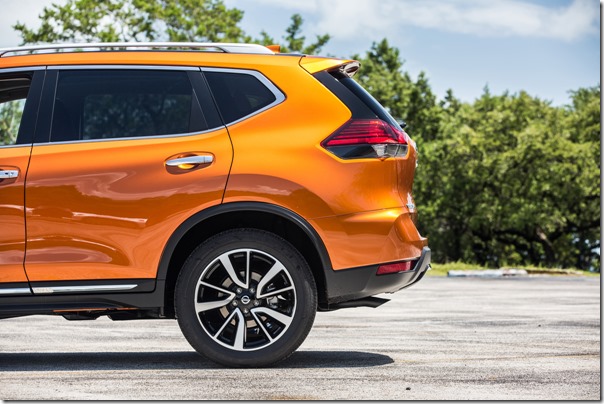 That is behind them now, and it is a comfortable, sensible, usable cabin that is harmonized with materials and attention to execution. There are some buttons that are ergonomically awkward in their positioning, on the lower left of the instrument panel such that I found the steering wheel (which has a nice diameter and a flattish bottom) blocking my view of such things as the button to turn on the heated steering wheel. That, however, is probably just a function of available space and I credit Nissan for actually having buttons for those tasks rather than putting them into a page on the seven-inch color touchscreen.

While on the subject of the screen (which has first-rate navigation system graphics, by the way, something that many OEMs have yet to master, surprising though that may seem), it should be noted that there are Apple CarPlay and Android Auto on board, as well as SiriusXM Traffic & Travel Link. It is the last-named which, I must say, had some rather bizarre announcements during my time in the Rogue. For example, it advised me that there were potential flooding conditions 29 miles away. It didn’t say in which direction, I wasn’t being guided by the navigation, it just thought that I should know. As I drove toward but perpendicular to I-275 it advised me that there were narrow lanes on the route, perhaps anticipating that I might get on the freeway. Information is good, but it isn’t particularly helpful if there isn’t some level of specificity.

As regards the performance of the Rogue, it is equipped with a 170-hp, 2.5-liter four-cylinder engine and a continuously variable transmission. That combo I found fit to purpose. The SL trim package has an array of standard safety tech, including blind spot warning, rear cross-traffic alert, automatic emergency braking with pedestrian protection, and lane-departure warning. There are a backup camera and an overhead view that can be useful for parking. One of the items in the optional Platinum Package ($790) is ProPILOT assist, which is intelligent cruise control that also includes the ability to put some torque into the steering wheel as required.

Yes, a lot of people bought the Rogue last year. And I can understand why.