Jules Verne published 20,000 Leagues Under the Sea in 1870; the 1954 film version staring James Mason as Captain Nemo came to mind while driving the Toyota Land Cruiser. Or actually the boat, the Nautilus, is what I thought about. Yes, this may seem somewhat oxymoronic—a “Land Cruiser” reminding me of a submarine—but there it is. 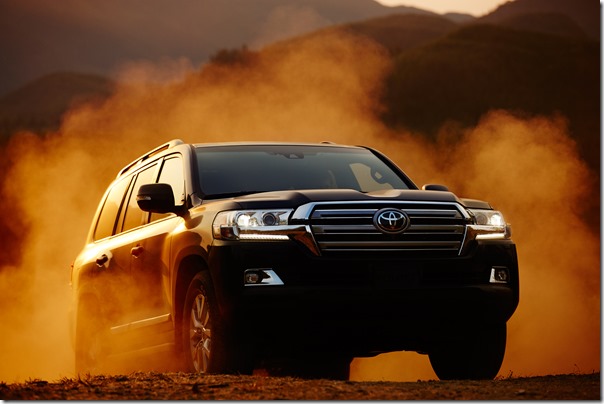 (Yes, I understand that Lincoln is going to be renaming the MKX as the “Nautilus.” This is primarily in keeping with its transition to using actual nouns for names (e.g., Continental, Navigator, Aviator) rather than three letters. And presumably there is a move toward a nautical theme for its SUVs. Perhaps the MKC will become the Narwhal or something. But the 20,000 Leagues boat is more appropriate for the Land Cruiser because as shown in the movie, the Nautilus is one-part 19th-century British gentleman’s club (i.e., wingback chairs; cigars; glasses of port) and one part 21st-century steampunk electromechanical device.)

In the novel, Nemo describes the Nautilus with remarkable engineering oriented detail thusly:

"Here, M. Aronnax, are the several dimensions of the boat you are in. It is an elongated cylinder with conical ends. It is very like a cigar in shape, a shape already adopted in London in several constructions of the same sort. The length of this cylinder, from stem to stern, is exactly 232 feet, and its maximum breadth is twenty-six feet. It is not built quite like your long-voyage steamers, but its lines are sufficiently long, and its curves prolonged enough, to allow the water to slide off easily, and oppose no obstacle to its passage. These two dimensions enable you to obtain by a simple calculation the surface and cubic contents of the Nautilus. Its area measures 6,032 feet; and its contents about 1,500 cubic yards; that is to say, when completely immersed it displaces 50,000 feet of water, or weighs 1,500 tons.

"When I made the plans for this submarine vessel, I meant that nine-tenths should be submerged: consequently it ought only to displace nine-tenths of its bulk, that is to say, only to weigh that number of tons. I ought not, therefore, to have exceeded that weight, constructing it on the aforesaid dimensions.

"The Nautilus is composed of two hulls, one inside, the other outside, joined by T-shaped irons, which render it very strong. Indeed, owing to this cellular arrangement it resists like a block, as if it were solid. Its sides cannot yield; it coheres spontaneously, and not by the closeness of its rivets; and its perfect union of the materials enables it to defy the roughest seas.

"These two hulls are composed of steel plates, whose density is from .7 to .8 that of water. The first is not less than two inches and a half thick and weighs 394 tons. The second envelope, the keel, twenty inches high and ten thick, weighs only sixty-two tons. The engine, the ballast, the several accessories and apparatus appendages, the partitions and bulkheads, weigh 961.62 tons. Do you follow all this?"

And I use this not because the Land Cruiser strikes me as what is sometimes dismissively referred to as a “land yacht”—or in this case a “land sub”—but because the vehicle is, yes, “sufficiently long,” at 194.9 inches overall length, and while it is not built with steel plates and its overall weight is only 2.9 tons (a.k.a., curb weight: 5,815 pounds), while there aren’t a series of rivets holding it together, it still provides the sense, which is undoubtedly borne out in reality, that it is built with the robustness that it could “defy the roughest of seas” were it to be a boat not an SUV.

Inside the Nautilus Aronnax discovered a dining room: “High oaken sideboards, inlaid with ebony, stood at the two extremities of the room, and upon their shelves glittered china, porcelain, and glass of inestimable value. The plate on the table sparkled in the rays which the luminous ceiling shed around, while the light was tempered and softened by exquisite paintings” and a similarly refined library: “High pieces of furniture, of black violet ebony inlaid with brass, supported upon their wide shelves a great number of books uniformly bound. They followed the shape of the room, terminating at the lower part in huge divans, covered with brown leather, which were curved, to afford the greatest comfort.”

And it is both the materials used in the Land Cruiser and the attention to detail, with the wood and metal trim and the seemingly crafted knobs and controls, that, again, reminded me of the boat. While there are not rooms, of course, in the vehicle, it is still quite large, offering seating for eight or, should you wish to achieve maximum cargo (middle row folded and rear row removed), you can achieve 81.7 cubic feet. 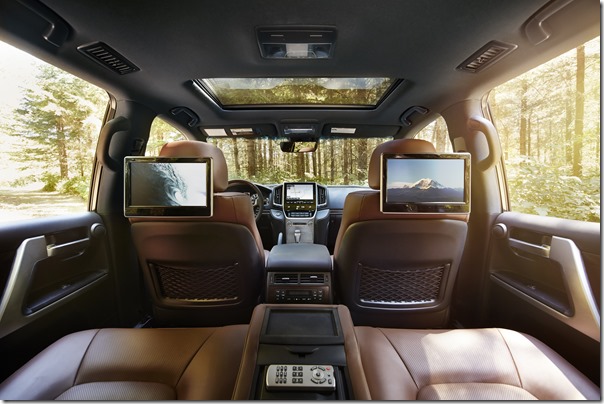 Still, there is a sense of space within the cabin that one doesn’t often experience within a vehicle.

And as for the comfort, know that the Land Cruiser offers four-zone automatic front and rear climate control with air filter, dust and pollen filtration; a 10-way power-adjustable driver’s seat with power lumbar support and an 8-way adjustable front passenger seat with power lumbar (both seats are multi-stage heated and ventilated); and semi-aniline perforated leather throughout the cabin.

The Nautilus had sophisticated gauges that allowed the Captain to be in full control:

“’"Sir,’ said Captain Nemo, showing me the instruments hanging on the walls of his room, ‘here are the contrivances required for the navigation of the Nautilus. Here, as in the drawing-room, I have them always under my eyes, and they indicate my position and exact direction in the middle of the ocean. Some are known to you, such as the thermometer, which gives the internal temperature of the Nautilus; the barometer, which indicates the weight of the air and foretells the changes of the weather; the hygrometer, which marks the dryness of the atmosphere; the storm-glass, the contents of which, by decomposing, announce the approach of tempests; the compass, which guides my course; the sextant, which shows the latitude by the altitude of the sun; chronometers, by which I calculate the longitude; and glasses for day and night, which I use to examine the points of the horizon, when the Nautilus rises to the surface of the waves.’”

And the Land Cruiser, while not offering an array of nautical indicators, does have an array of technology, on board, such as what Toyota calls, with Vernian imagination, “Optitron instrumentation,” which is a remarkably clear set of gauges—speedometer, tachometer, voltmeter, coolant temperature, fuel supply, engine oil pressure—and a thin-film transistor (TFT) display showing various pages of information, including the odometer, tripmeter, shift position, fuel economy, average speed, and more. As this is the 21st century, not Verne’s 19th—“’There is a powerful agent, obedient, rapid, easy, which conforms to every use, and reigns supreme on board my vessel. Everything is done by means of it. It lights, warms it, and is the soul of my mechanical apparatus. This agent is electricity.’ ‘Electricity?’ I cried in surprise”—there is Qi-compatible wireless charging and Siri Eyes Free Mode.

Although Nemo was able to say, “I repeat, sir, that the dynamic power of my engines is almost infinite,” the Land Cruiser is powered by a 5.7-liter, eight cylinder engine that produces 381 hp and 401 lb-ft of torque, so it is more than capable, albeit not nearly infinite.

It does have a full-time 4WD system with a Torsen limited-slip locking center differential that can distribute torque front to rear; there is also torque distribution to the wheels with the best grip during slippage situations. There is a two-speed transfer case that allows setup based on conditions. There are downhill and uphill assist, and even “Off-Road Turn Assist,” which works to tighten the turning radius by creating a pivot effect by applying slight brake pressure to the inside rear wheel. “I heard him murmur these words (the last which ever struck my ear): ‘Almighty God! enough! enough!’”