One of the most significant things about the 2019 Acura RDX is something that most people are not going to know about. It is the structure of the vehicle. This is something that a cadre of body engineers took to the utmost, creating a body-in-white that is using technology that has heretofore not been deployed: an inner and outer door ring system that uses laser welding of hot-stamped 1500-MPa steel. Now unless you’re a body engineer you might be thinking, “Huh?” Well, the thing is this: it helps contribute to a body structure that is 38.3% stiffer than the previous generation RDX, and that vehicle wasn’t at all spaghetti-like vis-à-vis stiffness, so that increase is impressive. One of the consequences of this is that squeaks and rattles aren’t an issue. (And because they’re not there, you won’t notice it.) In addition, the ride and handling are improved because the structure is such that it can resist the bending that occurs in situations, such as going into a curve (think about how if you go into a hard turn you’re moved to one side of the seat or another (and the RDX, incidentally, is available with 16-way power-adjustable seats), then realize that this is happening to the structure of the vehicle considerably more). And the other thing—and this is one aspect that no one really wants you to experience—is because the steel structure is so strong it helps provide protection in case of collisions. Another aspect of this clever engineering is that it makes the vehicle lighter while actually improving strength and stiffness, which means that the powertrain has less mass to move. 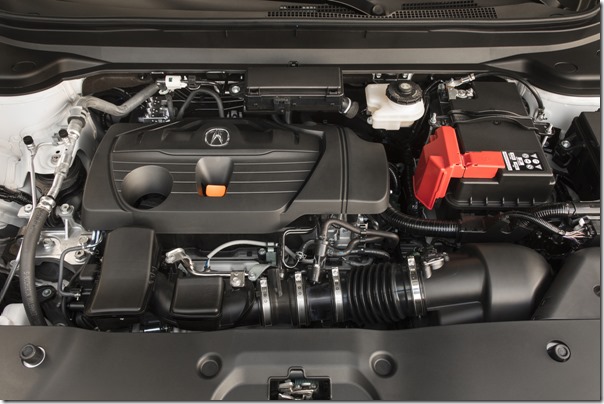 So moving to what’s under the hood, it is a 2.0-liter turbocharged four; the previous RDX has a 3.5-liter normally aspirated V6. Although the V6 is significantly bigger, than the four, it put out 279 hp and 252 lb-ft of torque, while the new engine produces 272 hp and 280 lb-ft of torque, which is to say that the 2020’s engine is much more efficient. (One metric of this is fuel economy, with a 2020 model with all-wheel drive getting 21/27/23 mpg city/highway/combined and the previous model 19/28/22 mpg.) That turbocharged four is mated to a 10-speed transmission that offers the ability to be paddle shifted. 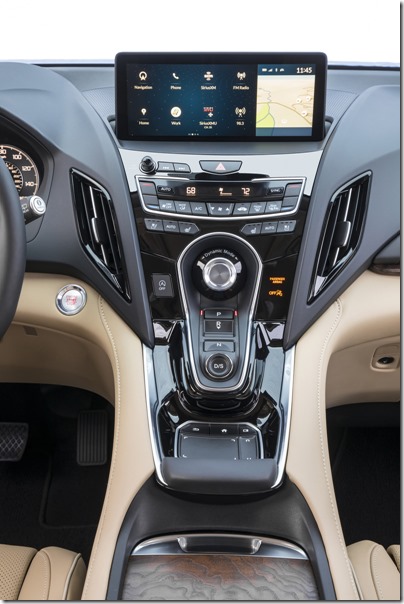 And as for the aforementioned all-wheel drive, the RDX has Acura’s exclusive SH-AWD, with the SH standing for “Super Handling.” What is important to know is that as much of 70% of the engine torque can be sent to the rear wheels should the conditions require, and of that torque, 100% can go to the left or right wheel, again depending on conditions. This is not only useful in cases of “spirited” driving (which is presumably where that “Super Handling” notion came from) but should you be stuck in snow.

The RDX comes with a standard panoramic sunroof, one that is 3.1 feet wide and 4.4 feet long. (This is another reason why the body structure is so important: with such a large section of metal cut out, there could be the previously mentioned pasta condition, which is not the case here.)

If we start at the top center of the instrument panel, there is a 10.2-inch display, a radio on-off button (small, but there nonetheless), HVAC with buttons, a dial to select the drive mode (Comfort, Sport, Sport+, Snow), the transmission selectors, and then the “True Touchpad Interface,” a touchpad that one uses to select such things as what is shown on the screen and in what arrangement (navi on the main part of the screen and audio to the side, for example). While this has caused some consternation among those who have used it, after a few days I found it to be not an issue; it even managed to recognize letters that I scrawled with my index finger, something that I wouldn’t have been able to do had I not just done the scrawling.

All in, the 2019 Acura RDX is well done. Especially the aspects that are all-but invisible but which contribute to a solid, safe and efficient structure.