The Cadillac ATS-V couple is a small(ish) car with a big engine. As in a 3.6-liter twin-turbocharged V6 that produces 464 hp @ 5,850 rpm and 445 lb-ft of torque @ 3,500 rpm. As for the size, the EPA passenger volume is 83.9 cubic feet. To put that into context, think of a car in a completely different class but one that is generally thought to be somewhat small: the VW Beetle. It has an EPA passenger volume of 85.1 cubic feet. A cubic foot is, well, a cubic foot. 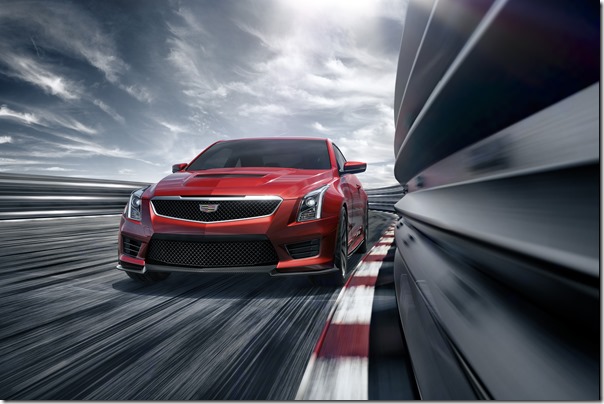 From an exterior styling standpoint, looking at the dimensions of the ATS-V Coupe--184.7 inches long, 54.5 inches high, 72.5 inches wide a 109.3-inch wheel base—the car is visually planted, given that it is comparatively low and wide when you look at it from the front. One consequence of this being low brings into play an ergonomic issue for some, which is having to lower one’s self down into the wonderful Recaro high-performance seats, which are a $2,300 option for the vehicle, which has an MSRP of $67,795, meaning that as you add in things like the $2,100 for the luxury package that adds things like alloy pedals and a universal home remote (seriously: that’s in the luxury package?), the safety and security package that brings in such things as a head-up display and a remote lock for the fuel-filler door (again: extra?—I had one of those in a Toyota Tercel—the fuel filler door, not the HUD) for $1,800, and so on, to the point where the vehicle as driven here has a sticker of $78,775, which is bigger than the interior (so to speak). Which leads me to wonder whether given the price it isn’t a vehicle that is being bought by Boomers more than any other segment, and chances are they’ve all got old knee injuries from basketball or jogging, which makes getting into the vehicle not that appealing.

However, once you get into the car, know that interior is exceedingly well executed vis-à-vis the materials deployed throughout. It looks and feels modern, of the moment.

According to Edmunds.com, the ATS-V Coupe (there used to be a sedan version, too, but it is no longer available, and apparently this car is going to go the same way) has a 0 to 60 mph time of 4.2 seconds. According to the Cadillac customer site the 0 to 60 mph time is 3.8 seconds. Let’s call it 4.0 seconds. And also according to Cadillac, the top track speed is 189 mph.

At the risk of seeming anti-car or something, what is the point of this car besides giving Cadillac something to put up against a BMW or a Mercedes, an M or an AMG? Is someone likely to buy this car and slam through the gears of the Tremec TR6060 six-speed manual on the way to work? Even on the rather well-known-brisk-driving I-696 in metro Detroit one would be likely to use no more than 2/3 of the capabilities of the car on a good day.

Evidently there aren’t a lot who see the relevance of the ATS-V because if we look at the total sales number of the ATS in 2018 and figure that there is but a fraction of that which are the V-series, then that total 10,859 seems somewhat minor. To put that number into context, and to realize that I am not anti-ATS, V or otherwise, realize that in 2018 Chevy delivered 18,791 Corvettes: if someone is going to buy a car to go fast in, then wouldn’t the person buy a ‘Vette (or a Camaro, for that matter, of which 50,963 were sold last year, and it was off by 25 percent)?

Soon, it seems, things like Cadillac coupes are going to become even more rare than they are now—and I’m not even talking about the forthcoming lead that the division is going to be taking in the electric transformation of General Motors. So in one regard one of the arguments to be made on behalf of getting at ATS-V Coupe is its overall rarity. After all, there are those who do have the wherewithal for that, but for the rest of us, a third car isn’t in the cards, 464 hp notwithstanding.