One of the things that rarely gets the amount of attention that it should in a typical “car review” is the fact that for a considerable amount of time drivers are not “getting on the throttle” because for a considerable number of drivers, they’re “dwelling on the binders,” a.k.a., sitting with their foot depressed on the brakes, perhaps lifting every now and then in order to nudge forward in traffic.

According to the analysts at INRIX, which look at things like this, for 2017 “the U.S. ranked as the most congested developed country in the world, with drivers spending an average of 41 hours a year in traffic during peak hours.”

To break that down a little more, know that Los Angeles is the most congested city in the world, where drivers are sitting 102 hours in peak congested conditions. But LA traffic is well known, so you might not think much about that.

But INRIX has found that there are other cities across the U.S. where things are similarly slow: in Boston and San Francisco there are “the highest U.S. congestion rates on arterial and city streets during the peak commute hours.”

The drivers in Everett, Washington, “spent more time stuck in traffic than anyone else”: in that part of the world there is a congestion rate of 28 percent.

Meanwhile, in Santa Cruz, California, the arterial roads and highways are plugged up for 12 percent of the time during the day.

And if you find yourself in Las Vegas during the weekend and plan on doing some cruising on the boulevards, know that you’ll be going about 5 mph. 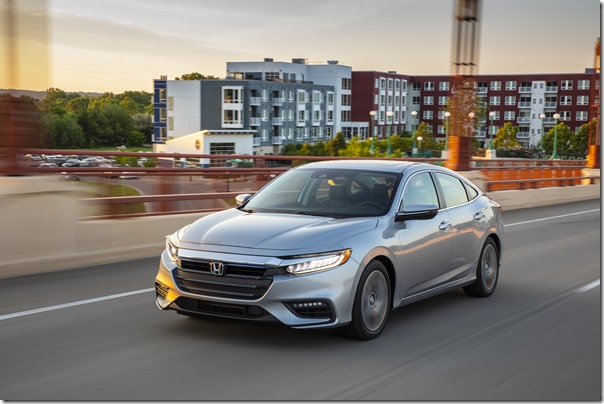 All of which brings me to the 2019 Honda Insight. A hybrid. It features a 1.5-liter Atkinson-cycle engine and two motors. One of the motors is a generator/starter which in addition to the functions denoted there, also works with a high-capacity lock-up clutch to supply power directly from the engine to the front wheels (in lieu of a transmission). The other motor is a 96-kW propulsion motor.

So between the propulsion motor and the 107-hp four-cylinder engine, there is a total system output of 151 hp. That certainly is reasonable for a sedan that weighs about 3,000 pounds.

But here’s the point: when you actually do have the opportunity to “get on the throttle,” you’re not going to have near the experience that you will were you in, say, a Civic Type R, which has approximately the same curb weight (3,117 pounds) but a 306-hp engine. The Insight seems to work, extremely hard, when you’re getting onto a freeway. Yes, this may be something of an absurd comparison, but the point is that the Insight should be considered what it is: a well-designed sedan that is meant to provide remarkable fuel efficiency without sacrifice.

The exterior design combines the appearances of the current-generation Accord and Civic sedans, and the Insight is positioned in the Honda lineup between those two vehicles.

Its long wheelbase—106.3 inches—provides good passenger space—97.6 cubic feet—and while the front seat passengers can certainly sit in comfort, let’s face it: this is a compact car, so the 37.4 inches of rear legroom notwithstanding, unless the driver and front passenger are compromising their comfort, the room back there is somewhat scant.

And as a high-technology vehicle, it is packed with, well, high technology, as in standard Honda Sensing (forward collision warning, collision mitigation braking, lane departure warning, adaptive cruise control with low-speed follow, traffic sign recognition, road departure mitigation); and for those opting for either of the two higher-level trims (EX and Touring; there is the LX entry grade, as well) get Apple CarPlay and Android Auto along with their Sirius XM radio. 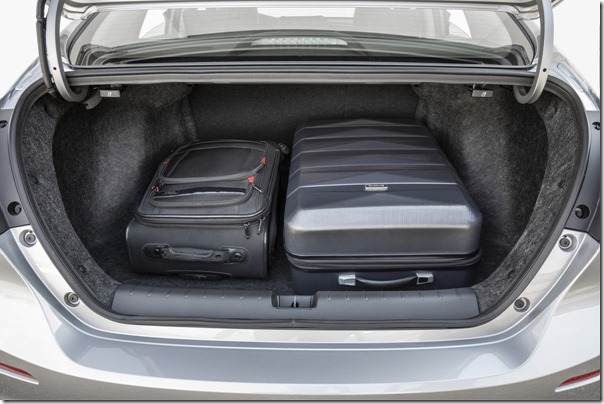 Something else that tends not to get the sort of attention that it should when cars are considered—after all, most people who buy cars actually go grocery shopping every now and then—is the trunk. The Insight’s is 15.1 cubic feet in capacity, and it has a low lift-over height, 26.5 inches, and a wide opening, 39.7 inches, so that cargo from Costco can be loaded without undue lifting strain.

Honda has been making Insights for a long time. The first generation went into production in 1999. After this amount of time, arguably the hybrid powertrain should simply be considered a powertrain. One that is exceedingly efficient. One that operates in a way that is transparent to the driver.

The Insight is a car. A sedan. An attractive one. A well-equipped one. And one that would be of especial interest to all of those who are living anywhere from Boston to Everett, from New York to Santa Cruz. 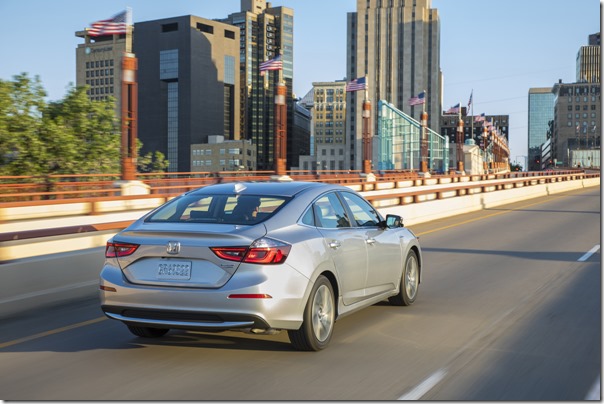