The thing about the 2019 Hyundai Veloster Turbo R-Spec is not the thing that most people might think of about the car. That is, most people will talk about the 1.6-liter turbocharged I4 that produces 201 hp @ 6,000 rpm and 195 lb-ft of torque @ 1,500 to 4,500 rpm. About the fact that the car has a six-speed manual transmission, something that is in and of itself a rarity, especially when this is a car that has a base MSRP of under $24K. 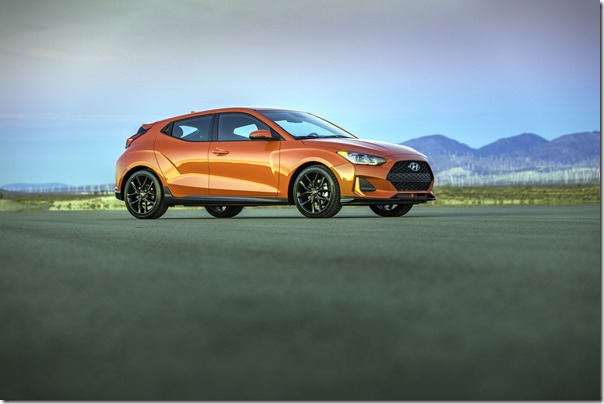 (One might remember the days of yore when a manual transmission had a non-trivial cost advantage compared to an automatic, but if you think about it, when most cars that people buy are equipped with automatics, not only does the manufacturer achieve economies of scale by manufacturing a whole bunch of them, but there is also the cost associated with getting EPA certification of the powertrain combinations: it essentially makes more financial sense for a company to say, “Well, we’re not going to sell a whole lot of these cars with manuals, so it is going to cost us going and coming—so let’s just call the whole thing off.” Know that in all of 2017 Hyundai Motor America sold 12,658 Velosters of all types, including those with automatics, and that through August 2018 it has delivered 7,190 Velosters, again, of all types, so even if 10 percent of the Velosters sold have manuals, that’s still not a whole lot of cars.)

No, the thing about this aggro-looking three-door (there is a rear door that’s “hidden” on the passenger side, which is probably there because when parked along a street, there is ingress and egress on the non-traffic side, but I must confess that when I had the Veloster and had my backpack or a bag of groceries, I wished that the door was on the driver’s side for purposes of convenience—but safety first) is the attention to detail that is discernable when you realize that it is there. 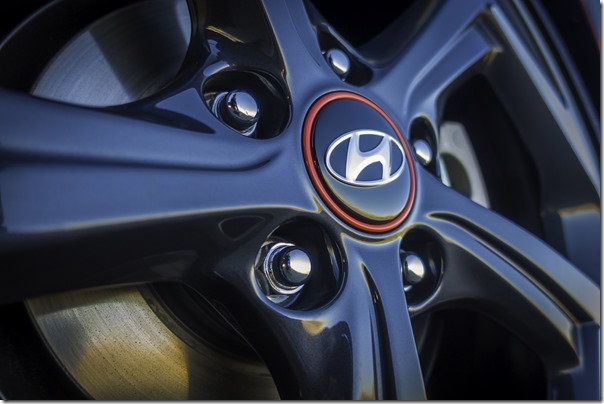 That is, on the instrument panel there are touches of yellow-colored trim that are inset simply because it looks good. Again, realize that this is something that comes with a manufacturing cost, yet the benefit from the standpoint of an owner having the satisfaction of knowing that the design and manufacturing team paid careful attention is priceless. There is yellow stitching on the seats, and the seat fabric also has an inset rather than being a unicolor wrapper.

And to roll back to the aforementioned transmission, there is a B&M Racing sport shifter with a metal knob. Metal.

On the outside, you’ll see touches of red, such as just below the bottom of the hexagonal grille, and around the wheel hubs.

Yes, there are the bigger things, like the pair of chromed exhaust tips, but the little things are the things that matter.

Because when you own a vehicle, when you live with a vehicle for a long time, those small things pop up in your perception every now and then, after your vehicle has just become sort of there, and you can’t help but be appreciative that someone took the time to do a little extra.