In the luxury vehicle space, the use of nouns, by and large, has been replaced by alphanumerics. While there are certainly rationales for the codes, probably for most people it is a matter of a 3 Series being smaller than a 5 and a 5 smaller than a 7. There was some thought that there would be a resurgence of nouns with the nomenclature being brought back by Lincoln (seriously: doesn’t “Continental” sound a whole lot more luxurious than “MKS”?), that seems not to be the case, as OEMs continue to come out with new vehicles that have non-name names. (There does seem to be an exception to this rule, like all rules, when you think about Jaguar coming out with the I-Pace and Land Rover the Evoque.)

The question that exists is do names matter? Arguably the answer is “yes,” for the simple reason that if you think about it, a brand is also a name, and brands are acutely important when it comes to almost everything that people buy, whether it is toothpaste or a new vehicle. Which brings me to the Kia K900, a luxury sedan that has presence, has engineering, has technology, has amenities, and as has been said so many times that the people at Kia are undoubtedly beyond sick of it, a bad name in the U.S. market.

To be sure there is that issue of it having some resemblance to man’s best friend. But I suggest there is more to it than that.

To go back to the 3 Series (although the K900 is more in the 7 Series space), the number works as well as it does in part because there are more in the sequence, and the other Kias in a store all have names (Soul, Optima, etc.). There is no K800. No K1000. So the whole numeric pacing doesn’t work.

Then there is the issue with it being a Kia. “Prepared to be Surprised” was once a slogan that the company used. And it is true that the vehicles that the company has been producing these past several years are truly surprising. The whole “cheap and cheerful” thing has given way to “affordable and substantial.” The company is delivering the goods in a way that is unexpected. A question that exists is whether someone who is going to be spending some $60,000 (the base MSRP is $59,900, and while it is incredibly well-appointed, there are always touches that you might want like wheel locks for those 19-inch alloys) on a car is going to wan t to source that vehicle from a place that also sells what are non-luxury vehicles. That became an issue in the U.S. market when Volkswagen had the Phaeton. Ask anyone who drove one of those and they’re likely to tell you that it is an impressive car. But VW didn’t say “luxury” in the U.S. market, so that space was ceded to Audi and the Phaeton went away (but not in other markets).

Then there is the question about whether someone buys a luxury vehicle not only for the stuff that a high sticker price tends to bring with it, but for “bragging rights.”

Let’s face it, there is a pecking order when it comes to luxury vehicles, with the Germans and Lexus in one area and then everybody else. But Kia isn’t among that latter group.

So if the purchase is more about image than it is about what is acquired for the money, then the K900 is not in a good space.

But for those who want something for their money, then it is an absolute consideration, nomenclature notwithstanding.

What is most striking is the interior execution, which combines materials including leather, wood and metal to provide a clean, modern sophisticated appearance. The attention to detail is exemplary.

That is supplemented by technology, the most evident of which is a 12.3-inch touchscreen for infotainment purposes. And there are other displays, such as a color TFT for the gauge cluster (which is cleverly animated) and a 9.7-inch head-up display (often those displays seem to be no bigger than a 3 x 5 card). Because the cabin is much like a finely appointed room, there is a 900-watt, 17-speaker Lexicon sound system. There is what is now the usual array of tech driving features, like adaptive cruise and lane-keeping assist, and so on. One of the nice touches is something called “Safe Exit Assist” that uses the car’s sensors to determine whether it is safe to open any of the vehicle doors lest one risk being hit by a moving object.

Of course, there is the engine, which in this case is the one that is used in the Kia Stinger, the performance sedan that has made many people rethink whether only the Germans can make vehicles in that category. It is a 365-hp twin-turbocharged V6. It is mated to an eight-speed automatic.

There is a standard all-wheel drive system (“Dynamic Torque Vectoring Control”), which is rear biased but can quickly divert up to 50 percent of the torque to the front if needed.

One more thing. This opened with a discussion that included BMW. It so happens that the tuning of the chassis was done under the direction of Albert Biermann, president of Kia’s Vehicle Test and High Performance Development. His job before joining the Hyundai Group (which encompasses Kia): vice president of Engineering for BMW M.

What’s more, the K900 is so well executed, inside, outside, mechanically, and digitally, it is incomprehensible how someone who is looking for a vehicle of this type wouldn’t consider the Kia. 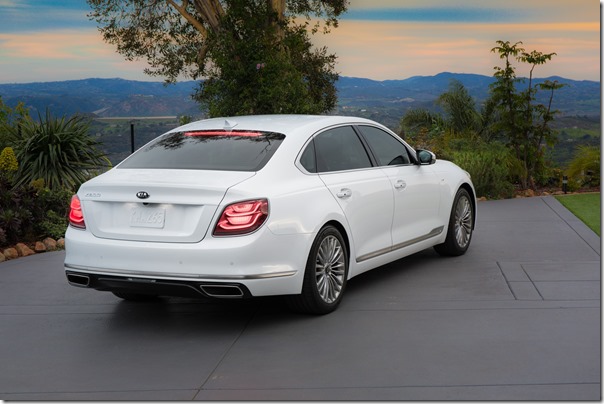