“Is that the big one?” a colleague asked as we approached the 2019 GX 460 in a parking lot. It is worth noting that the vehicles surrounding the Lexus were mainly pickup trucks, so the fact that that question was raised indicates that the GX 460 holds its own. It is an imposing vehicle: 192.1 inches long, 74.2 inches high, 74.2 inches wide (given the height and width, you can see that from the rear view it is nearly square, which is the geometry you want for something that has utility in its name), and it has a 109.8-inch wheelbase.

It has seating for seven in its three rows, although more realistically five (who would really want to go way back in the back?)

The GX is a luxury vehicle, yet it is one of those that is meant to be able to drive on surfaces that haven’t been manicured. In fact, it can drive on surfaces—it has full-time all-wheel drive, a Torson limited slip differential with an electronic locking feature, a two-speed transfer case, a “Crawl Control” system, downhill and hill-start assist control, and a four-link rigid axle, coil springs and stabilizer bar in the back (and double wishbone, coil springs and stabilizer back in the front)—that most people wouldn’t probably think about driving on, and certainly not in a Lexus. (I don’t know about you, but scratching the paint on a tree limb or rock wall would cause profound upset, even though you’d be cosseted in luxury (heated and cooled front seats; wood and leather abounding) when it happened.) 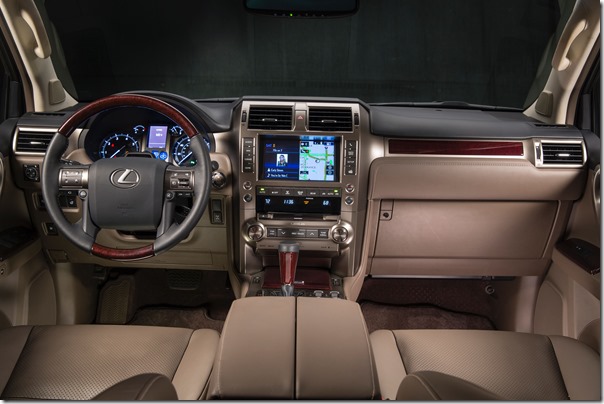 The GX 470 is powered by a 4.6-liter V8 that produces 301 hp and 329 lb-ft of torque; the GX 470 can tow 6,500 pounds, and that undertaking is facilitated by a trailer sway control feature, which is based on the vehicle stability control system.

The size of the vehicle notwithstanding, the power-assisted rack and pinion steering system with variable gear ratio steering (VGRS) allows one to maneuver the GX 470 in places like parking lots without having to undertake the sort of undue challenge that maneuvering large objects can sometimes present.

Full disclosure: I didn’t drive the GX 470 in a pioneer-like environment. I did drive the vehicle from Detroit to Cincinnati and back (admittedly, there are sections of the roadway in southeastern Michigan that do bring Meriwether Lewis to mind), and found the sort of stability and sightlines that are handy when surrounded by Freightliners and the like. (With height—in this case, the ground clearance is 8.1 inches—comes a bit of a challenge when it comes to getting into a high vehicle; fortunately, the GX 460 Luxury comes with standard running boards.)

There are some utilities that people consider to be posers. All look and no substance (or now that Toyota has moved its U.S. HQ to Texas: all hat and no cattle).

But the GX 470, its lux notwithstanding, is the real deal when it comes to more than that dirt road on the way to the winery.