Back in 2004, Volvo introduced a concept vehicle, called “Your Concept Vehicle,” in which case the pronoun essentially referred to women because as the company pointed out, the YCC was “the first car designed and developed almost exclusively by women.” Some would say that Volvo was ahead of its time—way ahead—with this idea. Others would point out that it is the sort of thing that should have long existed if for no other reason than women account for about half of the global population, so having a vehicle that was specifically developed for them makes a whole lot of sense. 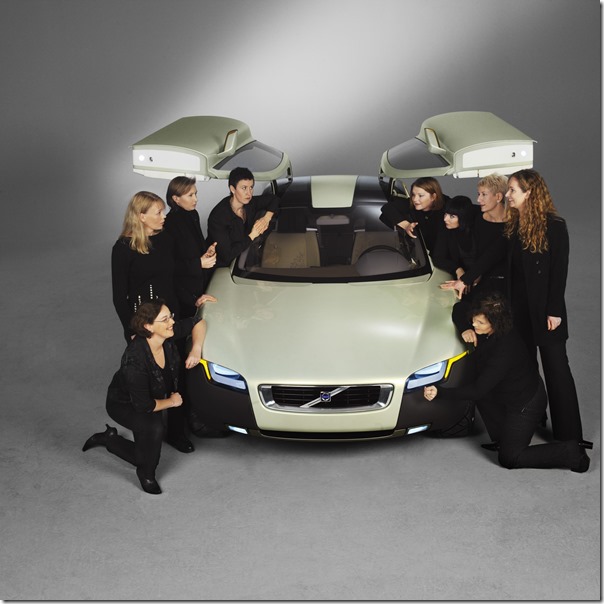 The Volvo YCC and many of the people who developed it

What’s all the more remarkable about the YCC is that it was almost prophetic in what it offered, as these are things that are now the sorts of things that one would expect to find in a vehicle, including: “no gas cap; easy-clean paint; numerous exchangeable seat covers of various colors and materials (linen, leather, felt, etc.); compartments for handbags; gull-wing doors that make it easier to load and unload larger items and children; computerized assistance for parallel parking; and improved sight lines. Owners carrying large items can set the doors to open automatically when they reach the doors.”

But the YCC never happened. The vehicle for women by women didn’t get beyond the concept stage.

Arguably, however, the Volvo XC40 is the YCC.

At this point I suspect that there may be a certain number of people in Gothenburg who have become completely apoplectic because of that claim. Certainly, they want all genders to drive their vehicles.

The XC40, however, a small SUV, seems as though it is designed and engineered in a way that there is more attention to detail—such as with the clever use of materials on the interior—than is ordinarily the case. What’s more, there is cleverly designed storage space—in the doors, under the seats—and even a hook for small bags on the front passenger’s side, such as for a purse.

There’s capless fuel filling. There’s a power hatch with an optional hand-free opening option. There’s ample—57.5-cubic feet—of cargo capacity. There is a 9-inch touchscreen that provides all manner of functions, ranging from navigation to the owner’s manual (this is something that I initially thought was a little tech-for-tech’s sake until I actually had to find out how to adjust something and I immediately became a fan). There are rain-sensitive wipers. There is a massive panoramic moonroof. 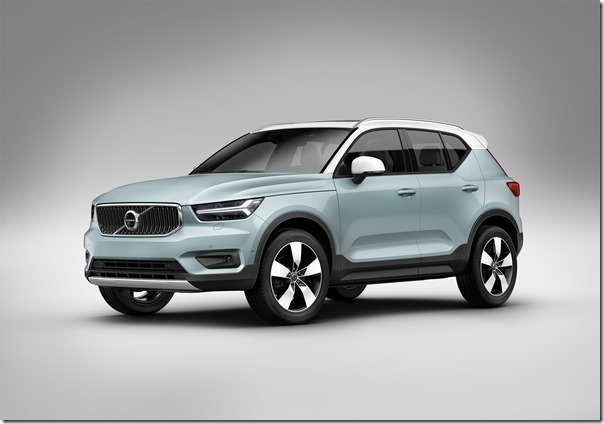 The XC40 Momentum with an Amazon Blue body and white roof and mirror caps is a vehicle that you’re not likely to see going and coming, not likely to see something resembling it. It is a thing onto itself. (Volvo would probably like there to be some seen going and coming, but for now for those who are looking for something that isn’t the zillionth of the same thing, this is the one that is still different.)

The Momentum T5 has a 248-hp engine that’s mated to an eight-speed automatic transmission. 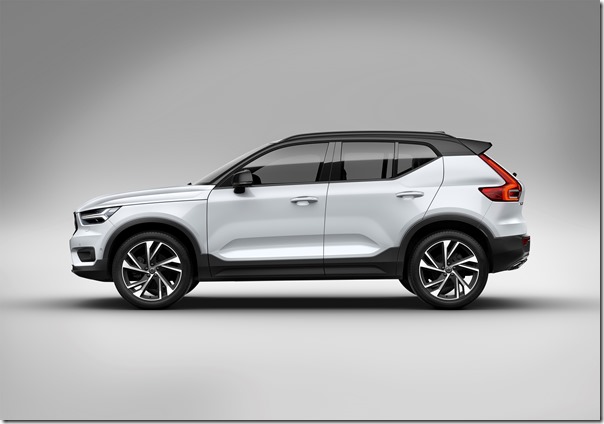 A few weeks after driving the XC40 Momentum I had the opportunity to drive the XC40 R-Design. This vehicle is predicated not on a pleasant pastel, but a gloss black. Yes, there is a contrast roof available. A white-bodied R-Design, for example, with have a Black Stone-colored roof. The interior takes on the dark theme, as well, and the seating surfaces are perfed leather and Nubuck. There is a sport steering wheel and paddles for shifting.

The R-Design T5 has a 248-hp engine that’s mated to an eight-speed automatic transmission.

The point is, this is the same vehicle, albeit one that has more of a aggressive look. But all of the aforementioned things are there, things that, in part, bring to mind the YCC.

When I think of the Momentum and the R-Design, it is almost a case of Dr. Jekyll and Ms. Hyde.