Which is pretty much the entire point of this vehicle: Compact and quick.

I must say that from the point of view of styling, the exterior sheet metal is certainly handsome, providing a sufficient number of creases without going the origami route on the one hand or the increasingly bizarre Euro approach which brings to mind King Ludwig as stylist yet stuck in a straightjacket before the whole thing is pulled off, thereby having some rather baroque surfaces that are oddly in place.

The CT4-V has a mesh grille in the front, quad exhausts in the rear, and an overall presence that melds performance and luxury. While the non-V version of the CT4 looks like something someone wearing a golf jacket would drive, the CT4-V looks like it would be a nice—but bad-ass—leather jacket-wearing individual.

The interior is certainly suitable for a Cadillac a fifth of the way through the 21st century, with the requisite leather surfaces, abundant stitching and metallic surfaces on the IP and elsewhere throughout. I was glad not to see something: wood, or “pl-ood,” the plastic-looking wood that is all-too common in “luxury” vehicles (it may be authentic, but given the coating it might as well be a film). With few exceptions, it strikes me that wood is an absolutely strange material to signify “luxury” at this point in time. Why aren’t we all carrying ornate snuff boxes? This is what the backseat looks like. You’re not likely to ever sit back there.

But one place where the interior is definitely lacking is in the rear seats. I am about 5-ft 8-in tall, yet with the driver’s seat positioned where I was comfortable, anyone who had tried to be behind me would have had to be an adept in doing the yoga knees-to-chest pose from a seated position.

I’d say the rear seats would be a good place for groceries were it not that the truck capacity is certainly Costco-capable and therefore the interior doesn’t need to be part of the transport of supplies.

If only it were better at the transport of adults.

But for those who are comfortably accommodated the CT4-V provides a fine experience.

That is, it has adaptive suspension and magnetic ride control. This doesn’t mean that there is a La-Z-Boy sensation when in the seats and cruising along. The car is planted yet when you hit the potholes and uneven surfaces that are characteristic of too many municipal roadways, you don’t feel as though someone just smacked you in the lower back with a 2 x 4.

The infotainment system is predicated on the Cadillac User Experience (CUE), which it has been improving for the last eight years, which is certainly several lifetimes in the digital space. The trick is to make such systems comprehensive yet easy to use, which is certainly the case in the CT4-V. There are Apple CarPlay and Android Auto. Bose 14-speaker system. And, yes, a volume knob. (As well as a second knob for function selection.) 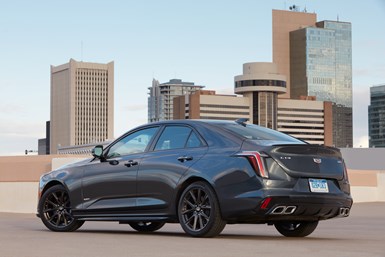 When you hear people talking about a car having a “good stance,” this is what they mean.

The base MSRP for the CT4-V is $44,495. The vehicle as-driven was fitted with $6,675 worth of options—many of which seem as though they would be standard, like heated and ventilated seats and lane-change alert with side blind zone alert (c’mon, Cadillac)—so with the $995 destination, a $52,165 sticker.

While people might bust out the spreadsheet at this point, it seems that a performance sedan ought to be selected based on how it makes you feel when you see it, sit in it, drive it. Not calculate it.