So to that end, Ford has decided that it needed to up the ante for the Ford GT, with an upgrade to the 3.5-liter EcoBoost twin-turbo V6. 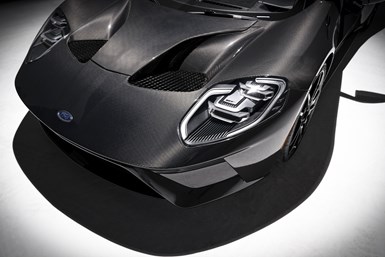 The engine output improvements are achieved by the use of a broader torque band, revised engine calibration, gallery-cooled pistons, and higher-energy ignition coils.

Another thing that the Ford Performance engineers have done to the 2020 model is to provide better breathing for the vehicle: there are new buttress air ducts that increase air flow by 50% and larger intercoolers are deployed to keep charge air temperatures cooler.

And while that addresses air in, they also modified exhaust out, making Akrapovič titanium exhaust. A benefit of the titanium component: a nine-pound weight decrease. The engineers point out that the exhaust makes the engine sound great, too.

As each visually stunning and unique Liquid Carbon GT is a manufacturing marvel, showcasing the characteristics and nuances inherent in carbon fiber composites.

The GT has a carbon fiber body. So to accentuate that, Ford is offering “Liquid Carbon,” a special clear-coat that allows the carbon fiber to stand out. And as an additional bit of flare: the Liquid Carbon model comes with carbon fiber wheels, with available carbon fiber lugnuts. This is a limited edition offering. As Angus Smith, general manager of Multimatic Niche Vehicles, North America, the firm that builds the GT, put it: “This next chapter in the Ford GT story allows us to fully demonstrate our mastery in both the art and science of carbon fiber craftsmanship and finishing. The results of this ongoing partnership between Multimatic and Ford Performance speak for themselves, as each visually stunning and unique Liquid Carbon GT is a manufacturing marvel, showcasing the characteristics and nuances inherent in carbon fiber composites.”