The only question about this crossover is: What took so long?
#Honda

Although another company probably comes to mind when you think “long history in providing hybrids to the U.S. market,” it is worth noting that Honda brought the Insight hybrid out late in 1999, which made it the first company to do so. This was the quirky looking (then as now) car that could pass for something that you’d climb into at an amusement park, but had some interesting technology, such as a 1.0-liter, three-cylinder engine mated to an electric motor. There was a recognition back then that while people would be interested in hybrids primarily for their fuel efficiency (the Insight with a five-speed manual had EPA estimated ratings of 61 mpg city and 68 mpg highway, which made it the most fuel-efficient vehicle on the road at the time), the second model introduced in 2001, the Insight CVT (as in continuously variable transmission) not only had the second-best numbers at the time—57 mpg city/56 mpg highway—but standard amenities like ABS, air conditioning, power windows, power door locks, and, yes, an AM/FM radio with a built-in cassette deck. 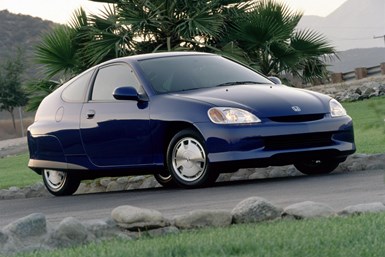 In subsequent years Honda has put hybrid powertrains in the Accord and Civic. In 2010 it launched the CR-Z, a hybrid-powered sport coupe, which went out of production in 2016. And it has developed a contemporary execution of the Insight, a sedan that looks like, well, a sedan, not like something out of The Jetsons, which is available in Honda showrooms right now.

But there is the shift in the market. The shift away from coupes and sedans to crossovers. Honda sold 239,244 cars in the first half of 2020. It sold 297,053 “trucks” during the same period. The best-selling car for Honda in the first half is the Civic, with sales of 127,858 units. The best-selling vehicle for Honda during that period was the CR-V crossover, with 138,898 sold. 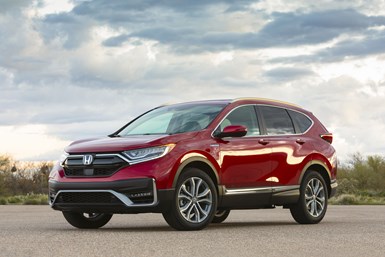 Honda has had cars with a hybrid powertrains. Now a crossover.

So not entirely surprisingly, Honda has developed the CR-V Hybrid, based on the same fifth-generation platform that carries either a 184-hp naturally aspirated 2.5-liter engine or a 190-hp, 1.5-liter turbocharged four.

Not only do people look for amenities in their hybrids nowadays but performance, as well: the CR-V Hybrid features a 2.0-liter four-cylinder Atkinson-cycle engine that generates 143-hp, but it is mated to a two electric motor combination so that the total system output is 212 hp.

One of the points that needs to be made is that a hybrid has more to its powertrain that a non-hybrid vehicle, which means there is more mass. So in the case of a non-hybrid CR-V EX, the curb weight is 3,514 pounds. For the EX Hybrid the curb weight is 3,708 pounds. That’s a 194-pound difference. Given the difference in horsepower, however, the performance of the Hybrid is actually discernibly different.

What’s more, I have found that oftentimes the hybrid versions of vehicles have better ride quality than their non-hybrid siblings: while mass reduction is the order of the day for all vehicles, sometimes this leads to vehicles that feel “too light.” So when you take a vehicle that is already mass reduced and add some additional weight in the form of a hybrid powertrain, there is a positive result. (I suppose one could argue that if you were to take a light vehicle and stick in a larger engine you’d get the same result—except for the fact that you wouldn’t improvements in fuel economy: in the case of the CR-V there is a 48% gain in EPA city fuel economy numbers and 31% combined; its numbers are 40 city, 35 highway, 38 mpg combined.)

What’s more, there is standard real-time all-wheel drive, that not only helps with the off-the-line performance, but is something that is certainly helpful to deal with environmental conditions. (There is a front transfer case and an electronically controlled rear diff that engages only when required by sensed road conditions and other inputs.)

The CR-V Hybrid also provides three drive modes: Sport (which calibrates throttle response accordingly and the vehicle has what is called an “Active Sound Control” system, that makes the appropriate go-fast noise in the cabin); Econ (which makes the appropriate throttle calibration and I assume reduces engine noise); EV (which can power the vehicle—depending on the battery charge—a mile without the internal combustion engine).

And while the brakes in a non-hybrid CR-V are pretty much controlled by one’s foot pressure, because the Hybrid has regenerative brakes (i.e., there are four-wheel discs, but the electric drive motor can be used to slow the vehicle without applying the proverbial binders) there are paddles on either side of the steering wheel that allow adjustment of the amount of regen braking performed.

The Crossover Hybrid Becomes a Thing

Let’s face it: Honda isn’t the only company that has a hybrid crossover in its lineup. It seems that this type of vehicle is becoming something of a phenomena in the market, not just adding incremental sales but becoming a significant contributor to overall sales in its own right.

Honda has been building the CR-V since 1997 and it has sold over five million of them since. It has deep knowledge when it comes to the vehicle.

And as previously mentioned, it is no stranger to hybrid tech, either.

The combination is a rather potent one.