Hyundai has announced that the 2020 Hyundai Sonata and Sonata Hybrid have both achieved an overall five-star safety rating from the U.S. Department of Transportation’s National Highway Transportation Administration. Which is an absolutely good thing to know for people who are thinking about getting a new family vehicle. After all, safety matters. 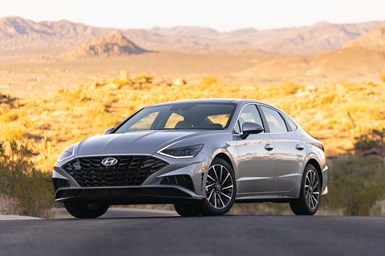 The 2020 Hyundai Sonata Limited. A production car with style that is usually seen only for concept cars. (Images: Hyundai)

But while that rating—as well as the TOP SAFETY PICK award by the Insurance Institute for Highway Safety (IIHS)—is important, odds are most people assume that all cars on offer today are “safe,” but that is a matter of degree.

And it is a matter of degree as to what safety tech that gets put on a car standard. There are four trim levels for the Sonata, SE, SEL, SEL Plus, and Limited. And as is ever the case, the amount of amenities goes up from the SE to the Limited.

But what is quite notable about what Hyundai is doing with this all-new Sonata is offering a whole lot of safety tech across the board standard, as in:

It is a production vehicle (built, should you be wondering, at Hyundai Motor Manufacturing Alabama) that looks every bit as cool as a concept car version of it would be.

One evening, I approached the car in a parking lot. The light was in-between, going from day to night. And the way it played on the surfaces of the car, it seemed to me that I was looking at a designer’s sketch. It wasn’t that the vehicle looked insubstantial in any way. It was that you could see the sweeping gestures that have been captured in sheet metal. It was remarkable.

The design language for the Sonata is “Sensuous Sportiness.” Sometimes it takes a designer to see how the language manifests itself into a physical vehicle. Not the Sonata. Anyone can see that this isn’t some run-of-the-mill, ho-hum sedan. Arguably, the people at Hyundai, recognizing that there is less interest in sedans, decided that they would create an exceedingly interesting sedan. And they have. 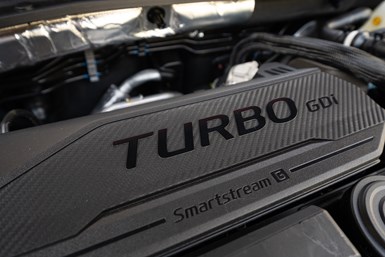 The suspension setup is MacPherson struts with coil springs up front and a multi-link rear. The Sonata has column-mounted motor driven power steering. As for the brakes, there are 12.8-inch ventilated discs in the front and 11.8-inch solid discs in the rear.

The Limited has 18-which wheels.

Speaking of height, the sloping roofline might make you think about the rear seat space, as in the head room. Here’s something to know. The Limited comes with a panoramic sunroof as standard. Sunroof mechanisms take space, so the headroom is typically truncated in vehicles with them—often nontrivially. So in the case of a design like the Sonata you might think that anyone sitting in back would need to take to posture of something akin to an uncomfortable crouch.

But that’s not the case.

In Sonatas without a panoramic sunroof (remember: standard on the Limited) the front headroom is 40 inches and it is 37.8 inches in the rear. 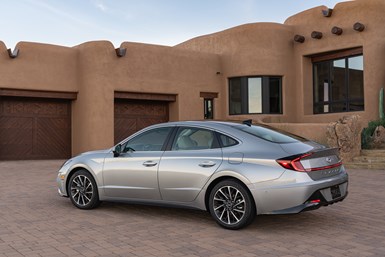 The roofline slopes but the interior headroom is still reasonable in the back. The best of both worlds.

However, in the Limited, with the sunroof, the first-row headroom is 38.4 inches, and in the rear 37.4 inches. That last number is certainly remarkable. There is the swept-back roof line. There is the sunroof. And there is just a difference of 0.4 inches of headroom.

(How did they do this? By adjusting the foam in the rear cushion as well as paying close attention to the seat design back there. Sure, one could minimize the thickness of the cushion and have a vehicle that would come with a certificate for free chiropractic services for 90 days or 10 rides in the back, whichever comes first. The rear seat of the Sonata is actually comfortable.)

Speaking of the inside, as this is an all-new vehicle Hyundai took the opportunity to create a fresh interior, with a design that has a freshness that is engaging as opposed to something that might seem to be of-the-moment, which is often sterile, not inviting. 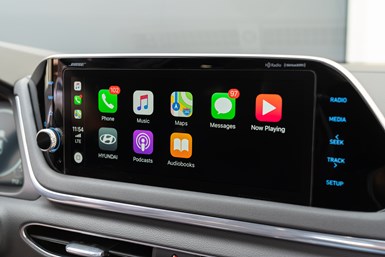 Yes, all that and more.

One of the things that Hyundai has been doing for the past several years is packing their vehicles with tech, like Android Auto and Apple CarPlay and its BlueLink telematics system. The Sonata is no exception to that rule.

The Limited comes standard with what is called the “Hyundai Digital Key.” Yes, there is a normal keyfob. But there is the ability to lock, open and start the car either with a card about the size of one of those that is used to open the doors of modern hotels; this works through what is called “Near Field Communication,” which is a wireless communication protocol that communicates with the card and device (e.g., the door lock) when they’re proximate. There is also the ability to use an Android phone to perform those functions, as well, in this case through Bluetooth Low Energy.

This is the sort of thing that is found in luxury vehicles. Or maybe that should be “in expensive vehicles.” Because the Sonata is comparatively lux but has a starting MSRP of just $33,500.

And yes, this is the “Ghost Kar,” the car with “Smaht Pahk.” Which is really “Remote Smart Parking Assist.” No matter how it is described, it is clever (though I wonder about its practicality: if you are able to insert the car into a space that would be too tight for you to be able to get out of the vehicle, unless you’re in your own garage or parked between walls, you might have a problem because if you’ve Smaht Pahked the Sonata between two other vehicle, the owners of those vehicles are not going to be particularly happy when they find that good looking car way to close to theirs . . .).