The planet is at least 20% desert. And should you find yourself in the thick of it, the Jeep Gladiator Mojave can handle it.
#Jeep #reviews #tires

For some people, it is the Stanley 20-Ounce FatMax Xtreme Claw Hammer or nothing. Or the Nilfisk GM-80 Light vacuum to do the floors. Or a Dell Latitude 7220 Rugged Extreme, because you never know when you’re going to need to check your email when it is -20° outside.

All of these things are the real deal. Authentic. Fit to purpose. Unlikely to ever let you down when you need them to perform. 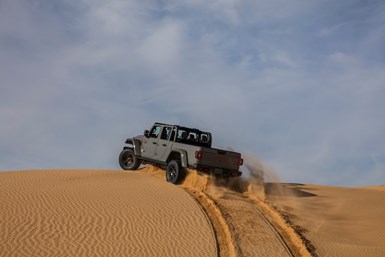 Find yourself in places like this? The Gladiator Mojave is just the thing. (Images: Jeep)

And what’s also unlikely is that for but a small percentage of people, what you could pick up at Home Depot, Target or Staples can do what needs to be done.

Which brings me to the Jeep Gladiator Mojave.

You are undoubtedly familiar with Jeeps that are “Trail Rated.” These are Jeeps engineered to be able to climb rocks and ford streams and drive in places that a person who is not otherwise found in an REI would take a spin in.

This Gladiator is the first Jeep that is “Desert Rated.” This means that the vehicle has been tested such that it is capable of handling extreme conditions, conditions that go far beyond what someone might encounter while driving on hard-packed ocean sand.

There are five categories that are tested:

The point is, this thing is built for the dunes.

The Gladiator Mojave is powered by a 285 lb-ft hp, 260 lb-ft of torque 3.6-liter Pentastar V6. It does seem rather amusing that the engine has start-stop capability, although should one be stopped in the desert, being thrifty with fuel is probably a good thing.

There is a standard six-speed manual transmission; an eight-speed is optional. For those opting for the manual, the crawl ratio is 57.3: 1; it is 52.6: 1 for the eight-speed.

Now at this point, some of you are saying “huh?” when it comes to some of those features and specs.

Some are nodding knowingly.

Some are pumping their fists.

The first group probably ought to look at one of the other Gladiator models such as Sport, Sport S, Overland, or Rubicon.

No, scratch the last one. (The people in the second and third groups, yes.)

The Jeep Gladiator, Mojave or otherwise, is a cool-looking vehicle, a four-door Wrangler mashed up with a 60.3-inch pickup box on the back.

But let’s be clear about something, particularly for those who are familiar with cruising around in a crossover: This isn’t one of those.

The Jeep Gladiator Mojave is built for function. The primary function is for those who aren’t going to Costco. It’s not that you can’t go to Costco in a Mojave, but odds are that you can find something else at your Chrysler/Dodge/Jeep/Ram dealership that is more well suited to that trip than the Jeep Mojave. (Unless, of course, you actually live in the desert, which means this would be just the ride you’re looking for.)

But for all those who just want to roll in it because it looks great—and it does—know that while you’re driving to work every day you’re going to be sitting on “aggressive front seats with integrated upper bolsters”—you know, the sort of thing that is really comfortable when you’re bottoming out on a salt flat or something.

I can tell you that the ride and handling of a Jeep Grand Cherokee is much more accommodating to ordinary excursions—and you can even get more 4x4 capability there than you’re ever likely to use, too.

Just like the aforementioned hammer, vacuum and computer have alternatives that are more likely to meet your everyday needs.