Yes, it can manage the hills and dales and rocks and rills. And it simply looks great.
#Land Rover #chassis

MotorTrend has awarded the Land Rover Defender with its 2021 SUV of the Year award. Which is no small feat, given that it was compared against 27 other vehicles, everything from a Kia Seltos to a Cadillac Escalade, from a Chevy Trailblazer to a Tesla Model Y. And plenty in between. 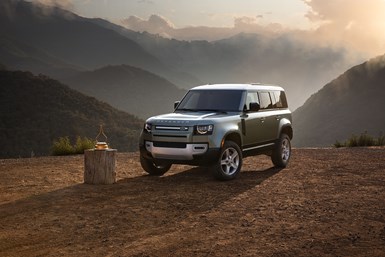 The Defender and the MotorTrend 2021 SUV of the Year trophy. (Images: Land Rover)

And I read Aaron Gold’s writeup of the Defender in Automobile Magazine, where he begins by asking whether the 2021 Defender is up to the stuff of the Defenders that were available in the U.S. from 1992 to 1997*. Aaron concludes, “no, I don’t think the new Defender ought to carry the name of its processor. The old Land Rover Defender was a dedicated off-road machine with all the complexity of a pickaxe. . . . The new Defender is quiet and comfortable, good-looking and family-friendly, and as adept at driving the Baja 500 as it is at driving to Baja Fresh.” 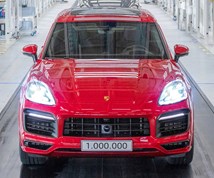 Way Off Road. Or Not.

Of course, when the folks at MotorTrend and Aaron tested the new Defender it was, in part, in conditions that would put grit in your teeth. Which, of course, is a primary point of this vehicle. It is engineered for the likes of Bear Grylls, I suppose, going to places where ordinary people are unlikely ever to venture, even with a Defender.

Consider: It can go through water one inch shy of three-feet deep. It has a 38° approach angle and a 40° departure angle (and if you don’t know what that means, you probably don’t need to know). There is wheel articulation of up to 19.7 inches (think of driving through a ditch). While its body is aluminum, the front and rear subframes are steel. Dana is the differential supplier and GKN is the supplier for the driveshaft, which is to say specialists in the supply of these components. 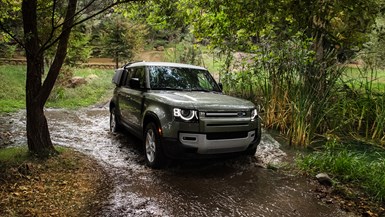 Sometimes getting to the strip mall is a little more challenging than others.

But to use Aaron’s metaphor, ordinary people are going to swing by their local strip mall with the Defender to pick up some carryout.

And there’s absolutely nothing wrong with that.

Because for some people, a drive like that is going to be done in inclement weather, whether that takes the form of ice, snow, rain or a combination. Maybe the driveway hasn’t been shoveled and there is a foot of snow just beyond the garage door.

For the Little Kid in All of Us.

What strikes me about the Defender is that it has an absolutely wonderful design, both inside and out. It is so well executed that it brings to mind something that is like one of the toy trucks that I played with when I was little, complete with visible fastener heads that were part and parcel of the object.

Let me hasten to say that when I say that it brings a toy to mind is in no way to minimize its capabilities (e.g., see the specs above), and at this point I ought to throw in the fact that the Defender as-driven has a six-cylinder mild hybrid setup—it has a conventional twin-scroll turbocharger and a 48-volt electric supercharger—that produces 395 hp and 406 lb-ft of torque and an eight-speed ZF automatic. 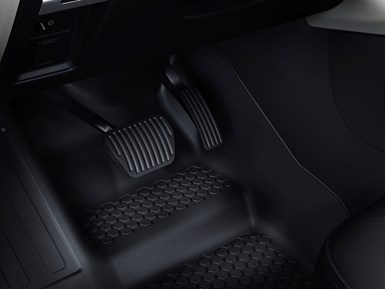 Yes, even the mats are well-designed.

Rather, it is a delightfully designed vehicle, especially the inside (where, let’s face it, you spend most of your time if you have one). Of the interior, which the company describes as having a “constructivist modular” design, Alan Sheppard, director, Interior Design, Land Rover, said, “A comfortable interior which is at once impeccably handsome for the discerning, shrewd in functionality and prudently qualified in anticipation of any adversity.” Let’s just put it this way: the rubber mats are such that you’re not going to want to opt for WeatherTech.

An Array of Amenities.

You can select your drive modes. There’s adaptive air suspension. Hill descent control (if you don’t know what that is. . . .). In addition to the LED headlamps and DRLs, there are fog lights. The options of the vehicle driven here included a cold climate pack ($700 for heated windscreen, heated washer jets, headlight power wash and heated steering wheel—all things that I can use here in Michigan during the winter), as well as an advanced off-road capability pack and an off-road pack, neither of which I would likely use.

The point of all this is that it clearly has the cred to do what a Defender is supposed to do, albeit in a more electronic way than its predecessors, yet it is the kind of vehicle that someone could want simply because it is so damn charming.

Yes, the base MSRP for the Defender 110 SE is $62,250. But think of it as the price for a satisfying grin that will undoubtedly be on your face every time you see it.

On the way to the office? Or another day of adventure?