For calendar year 2019 Lexus sold 3,378 GS models. Numbers like that belie that this is a car that is (1) enjoyable to drive and (2) doesn’t sacrifice room or comfort to achieve (1). Which is rather clever. So its sad sales performance is rather surprising
#Lexus #Apple

I will confess that I had no idea that the Lexus GS has been on sale in the U.S. since March 1993. (“GS”? “Grand Sedan.”) What is equally surprising to me that the advertising campaign that was one part provocative and one part creepy, “Something Wicked This Way Comes” was (1) for the GS sport sedan and (2) ran back in the fall of 1997, with the second-gen GS being launched in October of that year. (Arguably, that was the beginning of the transformation of Lexus from being perceived as a brand with cars so smooth you could pyramid champagne glasses on their hood to something more like shots of tequila—but an añejo version.) 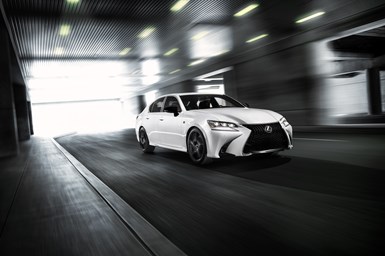 The GS has been with us for a considerable amount of time. The 2020 is of the fourth generation (with #3 being from ’06 to ’11 and this generation starting with model year ’12, with a major refresh for MY ’16).

We could argue that this is just another sign of the dominance of the utility vehicle—and let’s face it, Lexus, with the RX, is the one that really got the luxury ute segment in gear—but it could also be a sign that a sport sedan with a 311-hp, 3.5-liter V6 is just something that is of decreasing interest to the market, overall.

The cabin is comfortable and roomy, and the leather in the F SPORT is sufficiently sumptuous. In fact, all of the materials inside the GS are tastefully deployed. And what you probably didn’t know (OK, another thing that I didn’t know, which is bringing you to begin to wonder what it is that I do know) is that the analog clock that is centered in the IP, just below the 12.3-inch color infotainment screen and between the two center air vents, is housed in a single ingot of aluminum. A detail. But indicative of the vehicle, overall. 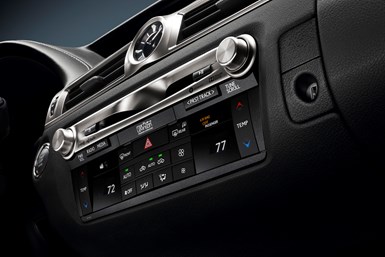 That analog clock is set in aluminum.

The F SPORT, in addition to having exclusive exterior colors (e.g.,”Ultrasonic Blue Mica 2.0”), has a tuned chassis to provide additional control when tossing the car on a track—or, more likely, two-lane highways.

Actual interior room in a sedan.

As the car has been in the market for nearly 30 years, and as this is a Lexus, know that there have been improvements made over that period of time, such that the GS is a solid sport sedan. Probably more solid than anything in its competitive set. But as some vehicles in the category have had models launch more recently than the current generation of the GS, there is more tech (Apple CarPlay, for example) than is on offer, which could be important.

Still, this is a car that has presence without flash (although I must say that the Ultrasonic Blue Mica 2.0 is a bit much, even knowing that it requires a particular paint process to pull off), a car that you know is likely to be in it for the long run.

And here is an indicator of the sort of longevity that is expected: Lexus Enform Safety Connect—which includes an Emergency Assistance Button (SOS), roadside assistance, automatic collision notification and stolen vehicle notification—is complementary for 10 years.