This is what a compact crossover ought to be. And it is.
#Mazda #Bose #HP

There are some vehicles that don’t photograph well. It isn’t that they’re poorly designed. It is just that when you see a static photo, you really don’t get a sense of the vehicle in actual surroundings. Its proportions in relation to other vehicles. To trees and buildings and streets and sidewalks.

And the Mazda CX-30 is one of those vehicles.

Yes, here are photos of the compact crossover. And you might be thinking to yourself, “This looks good; what’s he talking about?” 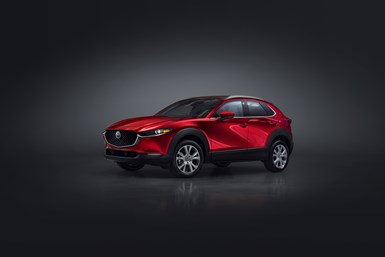 It looks even better in real-life (Images: Mazda)

And I would say that if you see the CX-30 in real life you will see a vehicle that has more style than Meryl Streep has Oscars.

And I will say that this vehicle ought to be the one that designers at other OEMs—exterior as well as interior designers—ought to study very closely because it is of the size and execution that will define this segment of vehicle going forward.

There is something of a coupe styling to it, with a sweeping gesture from the windshield across the roof to the backlight. There is the cladding around the wheel arches and along the lower portion of the doors, providing that look of SUV seriousness. (It is nominally a front-drive vehicle, but all trim levels are available with the Mazda i-Activ All-Wheel drive system which has something called an “off-road traction assist feature” that puts torque to the wheels diagonally that have traction and brakes to those that don’t; odds are this is something that will be experienced in snowy conditions because the likelihood of someone taking the CX-30 off road isn’t very.)

Under the sweeping hood.

The CX-30 is powered by a 2.5-liter four that produces 186 hp. It is mated to a six-speed automatic. While some people might think that nowadays there are typically a couple more gears in a given transmission, know that in this category of vehicle the continuously variable transmission (CVT) is becoming more common, so for those who like to have a feeling of forward motion that includes the nearly imperceptible pause as the mechanism goes from one gear to the next, the six speed is a nice thing to have. One of the arguments for a CVT is that it provides better fuel economy, but the CX-30, with AWD, provides an estimated 24 city, 32 highway, 26 mpg combined, so that’s really quite reasonable. Hatch opens to 20.2-cubic feet of space behind the second row.

The CX-30 has 94.1 cubic-feet of passenger volume when there is no sunroof. The Premium trim, driven has a sunroof. Odds are that the amount of space taken up by the sunroof would be noticeable primarily by NBA players. While it nominally seats five, it realistically seats four, and as this is a compact crossover, it is kids in the back, primarily. And speaking of that second row, behind it are 20.2 cubic feet of space for stuff.

Premium but not in pricing.

The Premium model (and it has a starting MSRP of $28,200 [the AWD variant is $29,600], so the top-of-the-line doesn’t break-the-bank) includes such things as leather-trimmed seats, steering wheel and gear selector; a Bose 12-speaker audio system; dual-zone automatic climate control; a windshield-projected color head-up display; an 8.8-inch center display and more. The instrument panel is pleasantly sculptural, and that center display is nicely integrated with the IP; it doesn’t look like someone said late in the design process, “We’ve got to stick a display on this thing,” and then, “thunk,” stuck an iPad into the clay model. 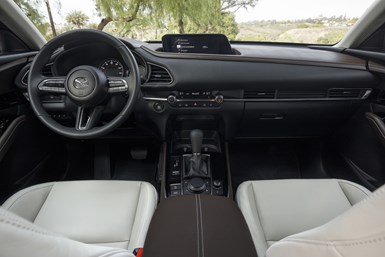 While we are getting to the point where people are more interested in checking out vehicles online and making decisions predicated on that, the Mazda CX-30 is a vehicle that you actually have to go see. You won’t be disappointed. It is that good.

And, yes, you might want to take it for a test drive, as well.