The 4Runner is built to take it—with it being something substantially more demanding than a Costco run—though it can do that, too
#Amazon #HP #Toyota

There is one thing that people really ought to know about the 2020 Toyota 4Runner TRD Off-Road Premium: It is not a crossover. It is not something that began life with a platform that would undergird a Camry or an Avalon. It is a serious bit of mechanical business. 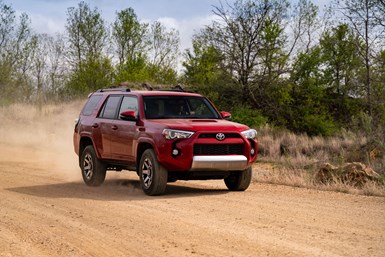 In a word, this 4Runner is a truck.

Admittedly, trucks are not once they once were. I mean, just consider the infotainment system that is accessed through an 8-inch touchscreen and features Android Auto, Apple CarPlay and Amazon Alexa compatibility. Or the SofTex-trimmed heated front seats (seats with the “TRD” logo stitched into the headrests) and the SofTex trimmed seats in the second row. You start it with a pushbutton, not a key. The trim is carbon fauxber heavy, providing a technical look to the cabin. These are elements of contemporary automobilty.

Then you spot the overhead console with its “Multi-terrain Select and Crawl Control” switches and you recognize that you’re not in a Highlander.

Or if you look at the outside, there are 17-inch, 7-spoke alloy wheels with black painted accents. There is color matching of elements including the front and rear bumpers (though these come with silver accents, to boot), door handles, sideview mirrors, overfenders. . . . The roofrails on the top are painted black and are fitted with black end caps. It looks, well, fashionable in an industrial sense. 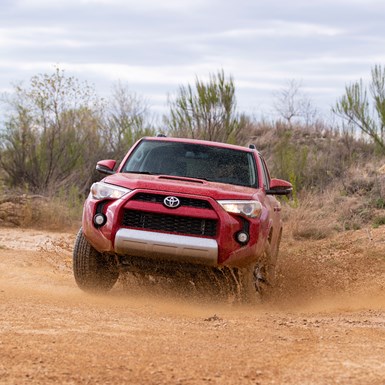 But then you note that behind the wheels (there is 9.6 inches of ground clearance, so you are able to see what’s back there without having to make Cirque de soleil movements) you can spot a serious suspension setup (e.g., there is a coil spring independent double-wishbone front suspension with stabilizer bar, as well as a coilspring four-link with lateral rod rear suspension with a stabilizer bar) and you know that this 4Runner may be in the same family as a RAV4, but it has a seemingly different DNA.

When you hit that start button and hear a grumble, you discover that it has a six-cylinder engine, but unlike the six that you might find in something a bit less, well, serious, this one is a 4.0-liter, not something around 3. It produces 270 hp @ 5,600 pm and generates 278 lb-ft of torque @ 4,400 rpm. It is mated to a five-speed transmission. You can hitch 5,000 to the back and pull it (per the SAE J2807 Methodology, a point made to underline the seriousness of the whole thing).

Then there’s the part-time 4WD system with a two-speed transfer case with selectable low range. Were you to be driving on surfaces that are not typically found where most people are, there is the selectable rear locker than can be engaged. You can’t even think of a CH-R when conditions like that present themselves. 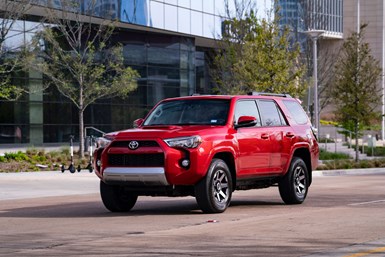 It is not a crossover. This is a substantial engineering.

But there could be no mistake.