You’ll think to yourself: “This is a Camry?”
#racing #Toyota #HP

The slogan “Race on Sunday, sell on Monday” occurred to me when I was watching the start of the Daytona 500: there, leading the ranks of Fords, Chevys and Toyotas, was a red 2020 Camry TRD—just like the one that I had had in my driveway the week before the race. Yes, that is a real car, not just something that was put together to pace the cars on the speedway. 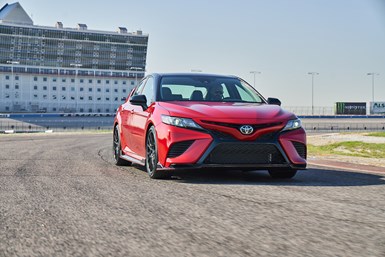 “TRD” stands for “Toyota Racing Development,” a 40-year old operation that has been preparing Toyota cars, trucks and SUVs for a variety of racing series, both on road and off.

The most obvious aspects of this not being a Camry XLE or the like are various exterior trim elements, such as a piano-black front splitter, slices of functional-looking trim along the rockers, dual round exhausts with stainless-steel trim, and an elaborate spoiler on the decklid. There are 19-inch black alloy wheels through which the red brake calipers are visible. 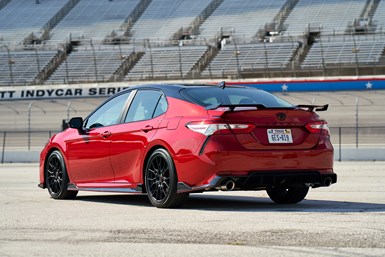 Sleek spoiler (and other aero executions).

Although the TRD version has the same 3.5-liter V6 that produces 301-hp that’s available in less-aggro-looking Camrys, there is a cat-back system with the dual exhausts that makes that racing burble upon starting the car and a smile-making sound when getting on the throttle (the pedals, incidentally, are metal; there are just two, as the transmission is an eight-speed automatic). It is a real contrast to a “regular” Camry, which has a cabin that is just this side of a noise-isolation chamber.

And while on the subject of the cabin, know that the seats (SofTex is used for the seats, which is a really fine faux-leather-like material; leather is used for the steering wheel wrap) have red stitching along the bolsters and there is a “TRD” stitched into the front headrests; the seat belts are red. And the primary color for the gauge cluster display. . .red. 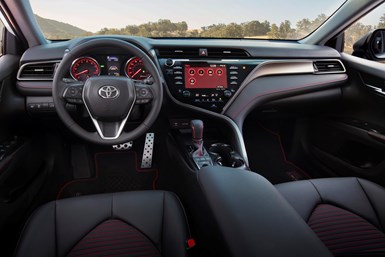 Note the red on the IP and if you look really close, you might see an abundance of red stitching.

The entire execution is one that makes you feel as though you’re not in what you might think of as a Camry. (Yet a really important part of the experience is that you also know that because you’re in a Camry odds are very, very good that the vehicle is going to be bullet-proof and not leave you on the side of the road with the hood up.)

The TRD contribution to the vehicle is not just things added and its distinctive race-track-like logo.

There are things that you don’t see but can feel. That is, TRD engineers went at the chassis system to create a more solid, precise feeling, particularly when cornering. There are thicker underbody braces to up the torsional rigidity of the vehicle. Through the use of specific coil springs the vehicle is lowered by 0.6 inches compared with the non-TRD sedan, and the springs and sway bars increase roll stiffness by 44% in the front and 67% in the rear.

Although you’re not likely to take a Camry TRD to the 304-acre MotorSport Ranch 14-miles south of Fort Worth, Texas, where chassis tuning was performed, you could and the vehicle would undoubtedly be able to comport itself exceedingly well. (There are two other places where chassis tuning was performed: the Toyota Arizona Proving Ground and the TMC Higashi-Fuji Proving Ground in Japan, two places you couldn’t get into even if you wanted to.)

“Race on Sunday, sell on Monday.”

Although this year’s Daytona 500 was rain-delayed and didn’t finish until Monday night, I suspect that there were more than a few who were looking at the vehicle configurator on Toyota.com for that Camry TRD. (Oh, and the race, incidentally, was won by Denny Hamlin. . .in a Camry.)