Toyota has been offering hybrid vehicles on the global market since 1997 (yes, it started in Japan and then methodically increased the availability across the globe) so that around now it has sold 15-million hybrids of various sizes and configurations. Earlier, to opt for a hybrid version of an existing vehicle was to mean that one was willing to increase that car (or SUV) payment by a non-trivial amount. But with time comes improvement and increased scale, such that the difference between a vehicle with a straight-up ICE and one that adds motors and batteries isn’t all that dear. 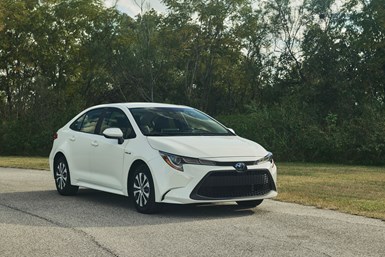 What’s more, and in some ways more important, at least as global regulations on such things like efficiency and/or emissions roll in, having hybrid availability on models that are in the lower portion of the showroom ladder is certainly important, as these are volume models and when you’re averaging your fleet, that’s good for the math.

Toyota is now offering a hybrid for its Corolla. And when I checked the company’s buying site, Toyota.com, I saw that the base MSRP for the Corolla with a 1.8-liter, 139-hp four and a continuously variable transmission is $19,600 and the base MSRP for the hybrid version with a 1.8-liter four and 53-kW electric motor that provide a combined 121 hp and a continuously variable transmission is $23,100. Which is a $3,500 delta. 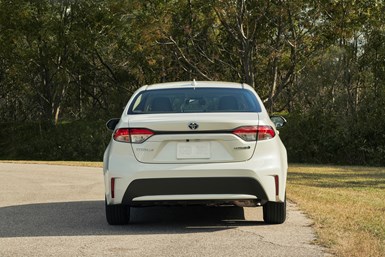 For those who care about things like spending money on lottery tickets that rarely pay out more than $5 or sodium-slathered beef jerky and coffee with creamers in little plastic cups—a.k.a., going to the gas station—know that while the conventional Corolla provides EPA estimated mileage of 30/38/33 mpg (city/highway/combined), the hybrid is at 53/52/52 mpg. Which means that the hybrid is better for your wealth and your health.

The Corolla Hybrid features 15-inch aluminum alloy wheels that are wrapped with low-rolling resistance tires, so these are not the things of billowing clouds of blue-ish smoke nor should they be because this is a fuel economy play, not a performance offering unless, of course, performance means to you a metric related to efficiency, and in the vehicle’s “Multi-Information Display” (MID) in the gauge cluster there is the “ECO accelerator guidance,” which provides information about how to get on the accelerator to achieve better miles per gallon, not 0 to 60. 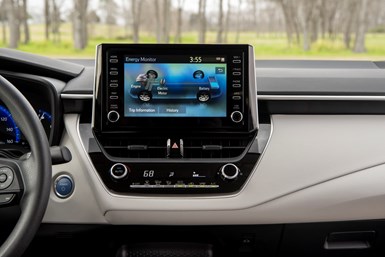 The exterior design of the car is reasonably stylish (although I think the five-door hatch has more curb appeal) and the materials and execution of the interior are well done.

The other tech that Toyota emphasizes for the Corolla Hybrid—as well as for the other vehicles in the showroom—is safety. There are eight standard airbags (while some might now take this for granted, it wasn’t all that long ago when that number—especially for a compact car—was somewhat unthinkable). And there is the Toyota Safety Sense 2.0 package as standard, which includes a pre-collision system (gets on the brakes when there is an imminent collision with another vehicle or a pedestrian and you’re not doing your job); dynamic radar cruise control (which adjusts speed and distance and can come to a complete stop); lane departure alert with steer assist (which alerts the driver and puts input into the steering system to maintain the lane); lane tracing assist (which deploys the two just mentioned techs to keep the vehicle straight in its lane when the lane is essentially straight); automatic high beams (when driving at night the high beams light your way until another vehicle is detected, which results in a switch to the low beams); road sign assist (“reads” stop, yield, do-not-enter, and speed limit signs and displays them on the MID).

Toyota has been offering vehicles that aren’t named “Prius” with hybrid powertrains for some time now. But it is only recently that the Corolla has gotten the hybrid drive, which is a good thing.