The most striking thing about the Atlas Cross Sport is how big it is.
#tech #Ford #Volkswagen

Maybe this has something to do with my notion of Volkswagen vehicles. That is, I think of a Golf or a Jetta. Or even a Tiguan. It’s not that these vehicles are small. They’re right sized. And even though the Passat developed for the U.S. market is “bigger,” a midsize sedan really doesn’t have massive presence. 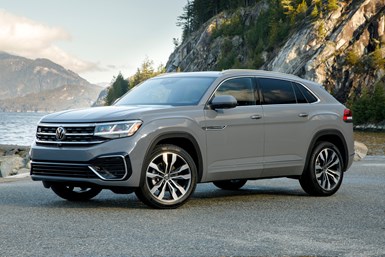 The VW Atlas Cross Sport. Forget VW and the Beetle. This is a sizable ute. (Images: Volkswagen)

But when I walked up to the Atlas Cross Sport, my initial reaction was “This really is a substantial vehicle.”

This vehicle is based on the Atlas SUV. A seven-seater. The Sport seats five. The primary visible difference is the slope of the roofline of the Sport. This results in a lower overall height: 67.8 inches compared with 70.1 for the original. And the Sport’s overall length is reduced by about five inches (Sport: 195.5 inches; non-Sport: 200.7 inches).

And while we’re rolling out with the stats here, the Cross Sport has a 117.3-inch wheelbase and is 78.4 inches wide—like the original Atlas. And the curb weight, of the all-wheel-drive (AWD) version with a V6 engine is 4,411 pounds. It can tow up to 5,000 pounds.

This features the R-Line bodywork trim package, which includes a bumper with chrome and piano black around the front air scoops and R-line side cladding. As this vehicle is based on the SEL trim, it has 21-inch wheels. The front fascia for the Cross Sport features a three-bar chrome grille and LED lights.

The vehicle is powered by a 3.6-liter V6 that produces 276 hp and 266 lb-ft of torque. The 4MOTION permanent AWD system employs an eight-speed automation.

But let’s get back to the dimensional aspects of the vehicle, because while the styling isn’t utilitarian, it isn’t baroque, either, so it is more about the interior than the exterior. 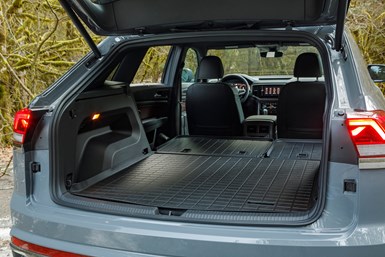 This swallows a lot of stuff.

The original Atlas is a three-row vehicle. The Cross Sport has two. So this gave the interior designers an opportunity to do something with the increase in available real estate. For example, consider the legroom in the second row. It is 40.4 inches. Which is comparatively capacious as it is, for example, 38.6 inches for the 2020 Jeep Grand Cherokee and 39.6 inches for a ’20 Honda Passport.

Then there is the “utility” element of the sport utility vehicle. Which doesn’t mean the AWD capability but what it can handle, as in cargo. With the second row up, there is 40.3 cubic feet of space. With the seat down, it is 77.8 cubic feet. Which bests competitors from GM, Nissan, Ford and Jeep. There is a lot of room back there.

What is a bit disappointing about the interior, however, is that while Volkswagen had once had material execution on the inside that left other OEMs shaking their heads in disbelief, it seems that that has passed, as some of the plastics are (a) hard and (b) easily smudged by skin oils.

The bottom line is this: If you’re looking for a midsize sport ute, don’t think “VW makes small vehicles; I need to go to the local Ford store.”

The Atlas Cross Sport is sizable and capable.

If you look very closely, there is a factory-installed trailer hitch on the back. With the V6 engine, the Cross Sport can tow up to 5,000 pounds.