As most people are driving far less nowadays, you might as well have a bit of fun while doing it—but also while remaining fiscally responsible
#Volkswagen

This is the four-door sedan that you want to buy if you are someone who is interested in having a bit of fun while running your daily errands. And it is mainly because of the powertrain: there is a 2.0-liter turbocharged and direct-injection TSI four-cylinder engine (it has a cast iron block, something that is becoming a rarity) that produces 228 hp (assuming that you put premium in the 13.2-gallon tank, which is becoming somewhat more reasonable nowadays as OPEC+ is trying to figure out how to adjust their spigots so that they can achieve maximal revenue as there seems to be declining use of their product) and 258 lb-ft of torque. 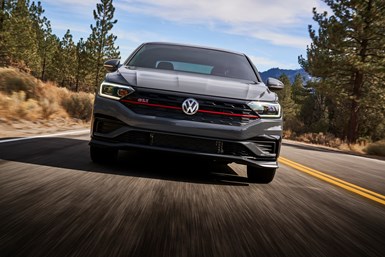 But there is that other part of the powertrain that provides the somewhat exhilarating drive to Kroger: the six-speed manual transmission—something that is becoming as unusual in compact cars with a normal trunk (14.1 cubic feet, in case you’re interested) as iron blocks are. (Speaking of which, as the accompanying chart from CarMax shows—and given that this tracks actual sales from the company’s 215 stores rather than some calculations based on potential availability of vehicles equipped with manuals, since 1995, the sales of sticks has fallen 89.5% so that today only 2.4% of the vehicles leaving the CarMax lots have manual transmissions.)

Although this is a front drive car, there wasn’t noticeable torque steer, which is a good thing. The GLI features both a XDS cross differential system (which uses the braking system to optimize traction) and a VAQ limited-slip front differential lock (which controls torque transfer to the wheel with the most grip). (Although this is something that is ordinarily written about in the context of someone getting on the throttle while driving hard on Mulholland, more to the point, and more typical of real life, I’ve found torque steer to be an issue on wet streets when pulling out of a subdivision onto an urban collector, which involves both hard acceleration and sweeping into a 90ish-degree turn.) 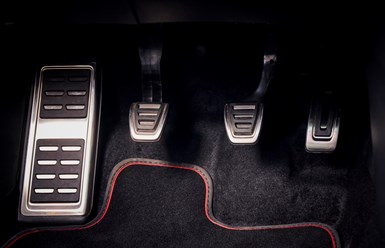 For those wondering. . .from left to right: dead pedal, clutch, brake, accelerator. For those who don’t know how to use the clutch, know that the car is available with a seven-speed DSG dual-clutch automatic. (Image: VWoA)

As regards the chassis, there are MacPherson struts and an independent multi-link rear setup. There is a electromechanical steering system with variable assistance (which I think is probably more useful in vehicles with a manual than an automatic as you have more things to think about when maneuvering at various speeds and consequently letting the machine make the effort adjustments for steering is as it should be). And speaking of adjustments, there is DCC, or dynamic chassis control, which means that the dampers are controlled predicated by the drive profile setting selection.

Because this is a GLI, there is lots of red touches from the calipers to the exterior trim. There is also 10-color LED ambient lighting that gets you red light when you put it in the “Sport” profile; there are red backlit inserts on the door sills and red stitching on the seats. Because this is the Autobahn version, there is more leather on the inside than you’d find on a typical Jetta.

You’re not likely to find as much function and fun at that price otherwise.

Maybe you really aren’t going anywhere nowadays. . .but you might as well enjoy driving. (Image: VWoA)