The 2021 Cadillac Escalade is a full-size SUV. Which sounds not all that impressive. Full-size. Big deal. 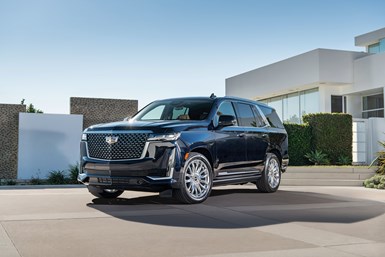 The 2021 Cadillac Escalade. All-new and ready to roll. (Images: Cadillac)

However, when you see it in sheet metal, unless your brain is on Novocain or your daily driver is something from the Caterpillar construction equipment collection, it is impossible to see the Escalade and not be rocked back more than a bit. It is massive. It is impressive.

City buses are big and short of something plying the streets of downtown London lack anything that is even close to charm.

Yet the Escalade design has been executed in a way that I suppose that those who have owned it for several years will still nod their heads respectfully when the valet pulls it up to the curb outside the country club.

It would be far too easy for the vehicle to carry a design that would be bland (let’s face it, there’s a lot of body surface there that has to be functional) or that would be in some ways. . .unusual, a “look-at-me!” approach.

But the Escalade design is one that someone combines fresh with respectable: There is no question that this is the New Escalade, but that message isn’t sent with anything that hasn’t been carefully considered, right down the to reflectivity of the Galvano chrome crest on the C-pillar.

The word from the Cadillac designers is that the ’21 Escalade is inspired by the design of the Escala concept sedan. While there is a certain similarity vis-à-vis the front lighting signatures of the two vehicles. . .

. . .what is more to the point is the similarity of the interior design. . .

. . .the instrument cluster, in particular.

One of the things that really makes the Escalade a leader is the segment is the OLED (organic light-emitting diode) display that curves across the instrument panel.

Why OLED? The biggest difference between and OLED display and what you’ll see in any other vehicle is that the OLED has twice the pixel density of a 4K TV.  This means remarkable clarity, better than what you’re going to find in a BestBuy.

Although there are three screens they are arranged such that the left and center are being a piece of glass and the large screen to the right behind another. But the whole effect is one of lots of information availability but executed in a way such that it is clearly arranged and not overwhelming. (One of the features that may be of interest to those who are cranking the AKG Studio 36-speaker surround system is that album cover art can appear on that right screen—OK, not a technological breakthrough but a nice touch.) There’s 126.6-cubic feet of cargo space behind the first row. Which is a definition of “utility.”

Those who are in the second row also have screens in this execution, with 12.6-inch diagonal touch screens behind the driver and front passenger seats, screens that allow content from one screen to be swiped to the other and even shared with the folks up front.

Speaking of seats, the first two rows have Mulan leather surfaces, which is not something from the Disney collection, but a nicely executed covering that is heated and vented for those up front. And those two up there also have 12-way adjustable powered seats. Here’s one way to think about this: The 2021 Escalade offers 170.4 cubic feet of passenger volume and an additional 42.9 cubic feet of space behind the third row. Which is to say that given the leather and the metal and the wood on the inside of the SUV, as well as that top-flight audio system and extensive digital capabilities, it is as if you are ensconced in a really nice recreation space that happens to be powered by a 6.2-liter V8 that produces 420 hp and 406 lb-ft of torque (mated to a 10-speed automatic).

One of the nice features of the Escalade—especially for those who might be taking this to their cabin in the woods that has a non-paved roadway to get there—is that it is available with magnetic ride control, which is making adjustments to the suspension every 14 msec, such that it reacts quickly enough to eat the bumps. There is also air ride adaptive suspension that can be added, so you’re gliding on the 22s that are standard on the Escalade.

There’s “HD Surround Vision,” that provides camera views of, well, the surroundings. There is the safety alert seat that provides haptic information to your bottom lest you ignore the other audio-visual warnings of impending not-goodness. There is an array of driver-assistance and safety tech as part of the package such that I suspect someone is going to have to spend some time (1) getting a detailed briefing at the dealership and (2) additional time with the manual because there is a lot here.

And that’s the thing about the 2021 Cadillac Escalade: There’s a lot there.