Some of these digits are absolutely remarkable, as the car itself undoubtedly is, as well
#Dodge #Fiat

The first number is the MSRP, in dollars, for the 2021 Dodge Challenger Mopar Drag Pak.

The second is the number of units that will be produced. 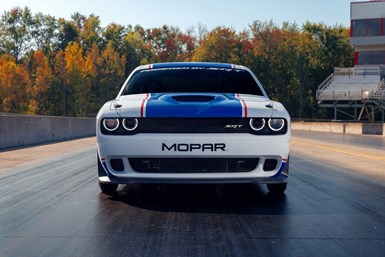 A few other numbers. Like 354. The cubic inches of the Gen-III HEMI V8.

Or 630: The NHRA-rated horsepower produced by the engine. The prior model was rated at 540 hp.

Three: the size, in liters, of the Whipple twin-screw supercharger.

Ten: the number of settings of the Drag Pak-specific tuned Bilstein coil-over shocks.

Or 4130, as in the TIG-welded 4130 chromoly tubing used to produce the NHRA-certified roll cage.

Ten: the size of the parachute, in feet, mounted to the frame rails. 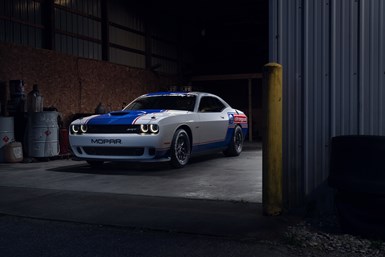 Looks fast even while lurking in a garage.

Non-numeric, But Enthusiasm to 11

“This is the quickest, fastest and most powerful Dodge Challenger Mopar Drag Pak we’ve ever built. And, 50 members of the Brotherhood are going to be able to buy this 7 second turn-key race car right from their local Dodge dealer.”-- said Tim Kuniskis, Global Head of Alfa Romeo and Head of Passenger Cars – Dodge, SRT, Chrysler and FIAT, FCA – North America.

2021: the model year that Dodge is offering 700+ hp versions of its models, including:

A Small But Big Number